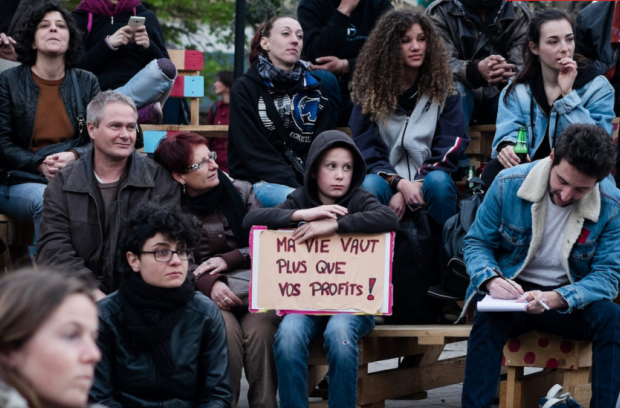 ‘Soon We Will Be Millions’: From Paris With Love And Lessons

This is not a protest. People here are creating something different, insisting on “real democracy”, mutual care and a newfound sense of togetherness.

“To celebrate and imagine together.”
“To look at each other and smile.”
“No parties, no barriers, no labels.”
“Take squares and rediscover hope.”

— Quotes taken from interviews by the Nuit Debout TV group

Thousands gather every evening in the Place de la République, and even more during the days and nights of the weekends. Assemblies are held every evening at 6pm, with people of a wide diversity of ages and social classes taking part. The plaza begins to fill around 5pm with circles of people standing and sitting, talking under cardboard signs to identify the theme of their discussion, including groups on economics, education, facilitation, feminism, housing and ecology.

Then, around 5:30pm high school students march in together, chanting and singing behind sheets painted with their school names. By assembly time there are always medical, legal, media, library and kitchen areas. And, somehow, as with every occupation I have witnessed, there is a meditation circle a few meters from the drummers. Everything is so wonderfully familiar, having participated in similar assemblies and plaza occupations, from New York to California, Athens to Thessaloniki, Madrid to Barcelona, Buenos Aires to Cordoba — and on and on…

Paris is alive with democracy. Real democracy. Overflowing the streets and squares. People speaking and hearing one another in assembly after assembly. Growing in number, geography and diversity. The movement that first began with high school students rebelling against the police killing of a student, and then mass resistance to a potential rollback of long-held labor protections, spread to people speaking in squares, trying to occupy them at night, being repressed, and coming back the next day, and the next, and the next.

This is not a protest. People here are creating something different. They are not making one demand — they are speaking to one another insisting on “real democracy”, meaning face-to-face discussions about their own lives and things that matter most to them. And when and if they do come up with demands, it will have been out of these sorts of discussions — decided horizontally and together. There are now dozens of squares holding assemblies nightly in France alone. Many more dozens of similarly organized movements are springing up in other parts of Europe and Canada as I write.

For a more complete history of the movement and its day-to-day activities, read Marisa Holmes’ article. She is one of the initiators of Occupy Wall Street and is currently in Paris.

Topics of discussion vary, though the most substantive conversations happen in the various commissions and in the neighborhoods where more assemblies are springing up. These discussions are then brought back as reports to the general assembly. After only two weeks the assembly decided that consensus, while appealing in so many ways, was not working and moved to a combined form of voting with consensus. The movement is learning through practice and together with people from other movements, like Occupy Wall Street and the 15-M movement, who are also there in the squares to support and share experiences.

So many things are consistent in Paris with the other movements for real democracy, from the importance of the face-to-face discussions, the exclusion of political parties, the striving for horizontal relations, the breaking down of hierarchy and the care of and for one another as much as possible — even if only in those hours of togetherness.

And of course the contagion of the hand signals to make one’s feelings known in a mass crowd, such as the twinkling of fingers in the air for agreement or the crossing of one’s arms in the air to show dissent. The Feminist Commission has added a new sign, reflecting the evolution of the movements, which is two fists meeting above one’s head to call out a sexist remark.

I have spoken with movement participants in many places throughout the world, and almost all my interlocutors — from Spain and the US to Turkey, Greece and Argentina — reflected on how they feel different now, since participating in the movement: more confident and with more affection for others. Something different happens when taking place in assemblies with others, listening to what strangers have to say, and taking care of one another.

The fact that every occupation insists on having food for those in need, basic medical and legal support, as well as space to just be quiet, to meditate or to help with conflict resolution or mediation, reflects the seriousness with which the movements approach the question of relationships in the here and now.

And of course there is the joy — the music, songs and dancing that manifest this joy at a newfound togetherness. I joked earlier about the drumming in every square around the world, but it is a space where people can be free to move and to feel. Drumming can be a release of so many deep sentiments, creating feelings of togetherness and well-being. In Paris people relayed how they are smiling at one another more, while in the US in 2011 people spoke of all the hugs that would be given in greetings. In Argentina, the language of affect, care and love similarly predominated.

It is clear that the Movements of the Squares — or Real Democracy Movements — that began in late 2010 are in no way ending: they are moving, popping up again and again around the globe as they change form, as they will continue to do. Movements are not linear; they move, have ebbs and flows. The movement in Paris may continue to spread and grow until there is enough popular power to govern from below. Or it may dissipate from the squares, relocating into other spheres of life — perhaps to come back again even larger and more grounded in different neighborhoods, workplaces and schools. Or some combination of both of these. Or not. The future is yet to be determined.

SOME IDEAS FOR GOING FORWARD

So what does all of this mean for those of us in places where mass assemblies are not yet taking off — or are not taking off again right now?

I was recently part of the effort to draft “Some Possible Ideas for Going Forward”, an open call for a discussion on what a people’s agenda might look like. Rather than discussing and responding to what others say they will do — or not do — for us, we ask what we want and how we could make it happen.

In the document we use the language of a program, not in the sense of political party platform, but as a possible plan for collective action. The intention is to spark conversations — ideally in person, face-to-face — in assemblies. There are many signers to the document, with people from different backgrounds and perspectives. The intention is to generate space for a diversity of positions. Mine is that of direct democracy and the formation of local and regional assemblies.

The document is organized thematically, with issues such as gender, health, education, race, housing, and so on — themes not dissimilar from the commissions established in Paris or the working groups at Occupy and 15-M. Why not organize a conversation with a few people at lunch? At your university? In a plaza or square? We don’t have to start with the expectation that we will launch a Nuit Debout, 15-M or Occupy Wall Street right away. We just have to start talking to one another about our political agenda, and doing so face-to-face, making careful use of technology.

Many people are already doing this of course — but ours is a call to continue these conversations, to deepen them and think together towards a future where we have a more coordinated concept of what we want and how we might make it happen.

Imagine if before Occupy or Nuit Debout informal and formal groups as well as neighborhoods and student groups had already come to loose agreement on a number of things, like, for example, the right to housing and the importance of taking over empty buildings to make it real. Or, using the example of the Solidarity Health Clinics in Greece, people could have decided that we should create free healthcare in a way that also re-imagines the very meaning of health and care. Then, with that base of agreement, the working groups might develop concrete proposals or actions that could take place almost immediately.

This is the sort of thing that I imagine this document could help inspire — people coming together to think about what is important to us and how we might make it happen. Even if this does not happen right now, it could lay the groundwork for future possibilities — and gathering hundreds of thousands of people in squares around a country or region is a very real possibility for action on those things on which we agree.

I am confident that there will be more occupations of public spaces and more assemblies. Until we live in a real democracy, it is up to us to create such spaces — and we will. But what if next time we had more preparation? More conversations about the things we have in common, the things that are most important to us? Could we move faster? Move on towards taking over schools and workplaces?

Here I am imagining the Spanish Revolution of the 1930s and how it was able to move so fast precisely because people had been organizing and talking together for years about what they wanted and how they might make it a reality. Taking over land and running it in common, even taking over banks, was much less of a debate, as the need for such decisive action already enjoyed a general consensus in the discussions of the prior years. As the Nuit Debout Facebook page writes at the moment I am concluding these reflections:

We are more than 100,000 people on this page. We are in 150 cities,‪#‎partoutdebout, in France and dozens of cities around the world. We are also ‪#‎banlieuesdebout, ‪#‎artistesdebout and many other things! We are 100,000 and soon we will be millions — in the process of creating a new force that will displace the old world.