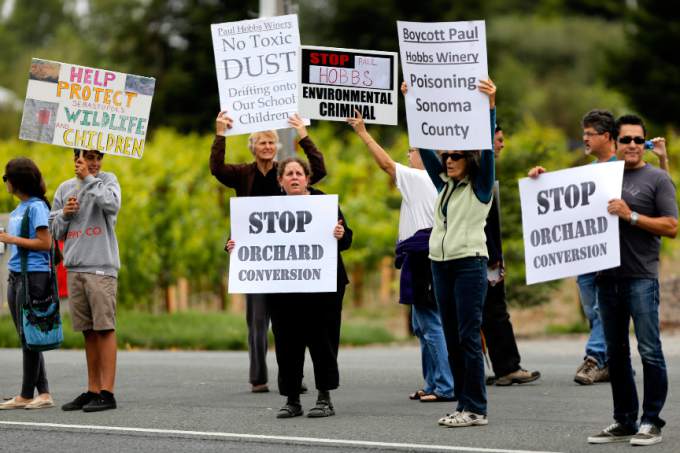 (Sebastopol, California) Sonoma County’s premium wine industry in the San Francisco North Bay has become a magnet that attracts developers from around the country, across oceans, and nearby. They move heavy industrial operations into rural areas and expand them to become event centers and commercial bottling operations. Under the pretense that they are merely agriculture, rather than alcohol-producing factories, large wineries seek to avoid Environmental Impact Reports (EIR) and the California Environmental Quality Act (CEQA).

Such wineries over-use precious, limited resources—such as water, air, and land—which threatens the environment and the quality of life in our semi-rural region. The contiguous Napa, Lake, and Mendocino Counties have also recently experienced over-expansions of wineries and vineyards, as well as growing efforts by residents to reign them in. In Napa, large wineries are already trucking in water and trucking out wastewater.

Fortunately, many grape-growers and smaller wineries continue to follow regulations and not over-build. They are a credit to agricultural and rural communities. On the other hand, a prominent banker, Chinese developer, and two large Napa County wineries are opposite examples that have generated mounting concerns, especially from Sonoma County’s rural residents who feel invaded.

Retired Citigroup CEO Sandy Weill, of what has been the world’s largest bank, bought a winery and moved here part-time from New York City in 2012. He purchased a Sonoma State University (SSU) honorary doctorate by giving a $12 million dollar gift, with strings attached. Part of SSU’s elite Green Music Center was also re-named after him. This was the first time SSU gave an honorary degree in return for such financial benefits, rather than for academic achievement.

For $41 million dollars, a subsidiary of the Chinese developer Oceanwide Holding recently purchased the 186 acres of La Camapagna near Kenwood, off the nearby busy Highway 12. It includes the rights to develop a winery and luxury resort. This is one of the largest stretches of land on the Sonoma Valley floor that has not yet been “improved.” The citizens group Valley of the Moon Alliance stalled a previous development on this land by a 2004 lawsuit. Oceanwide Holding also plans to develop what would be the tallest skyscraper in San Francisco.

A member of Napa County’s Wagner wine family–owners of Caymus Vineyards, as well as the brands Mer Soleil, Belle Glos, and Conundrum–applied earlier this year to build the Dairyman Winery and Distillery on Highway 12. It would be on the high-speed greenbelt community separator between Santa Rosa and Sebastopol. The application came to public attention when the Sebastopol City Council voted unanimously, 5-0, on Feb. 3 to recommend to the County’s Permit and Resource Management Department (PRMD) that they reject it. Eighteen residents argued against the winery; the owner was the only person supporting the application owner.

Dairyman applied for 87,000 square feet of buildings to produce 500,000 cases of wine and 250,000 gallons of distilled spirits a year. They want to host more than an event a week, with up to 600 people, as late as 10 p.m. It would be one of Sonoma County’s biggest wineries.

“In late July, the Wagner family reached a $1 million legal settlement with the county of Napa (for) exceeding the permitted production capacity at Caymus’ Rutherford winery,” writes the Sept. 9, 2013, pro-wine industry North Bay Business Journal. They bottled 20 times more wine than permitted on site. This was the largest settlement ever paid by a Napa winery. Violating such rules worries many Sonoma residents concerned with what the Wagners might do here. How good of a neighbor is such a rule-breaker likely to be?

Winery industry “bad actors” negatively affect the public perception of wineries and vineyards in general. Many local wineries who try to do their business responsibly resent that they appear guilty by association with those who scoff at the laws. It represents an unfair business practice to ignore the laws that others go to great expense to follow.

The Wagners’ wine empire is metastasizing beyond Napa. They are spreading out to the Suisun Valley on the other side with their expansionist plans to the east in Solano County, according to a Feb. 28, 2015, Napa Valley Register article. When is enough enough for these behemoth winery event centers? How much land will they leave in Suisun for food farmers currently there? The Wagners seem to have grapes in at least half a dozen counties, which they truck to Sonoma and elsewhere.

Grape growers and the wine industry contribute valuable benefits to Sonoma County and the North Bay. Most critics appreciate a good glass of local wine, though few can afford the $300 wine bottles made by wine barons such as Paul Hobbs.

Hobbs also recently accepted a settlement of $100,000 with Sonoma County for violating its land-use regulations regarding planting vineyards at several rural sites. These violations included clear-cutting redwood forests without a permit in what used to be known as the natural “Redwood Empire,” rather than the commercial “Wine Country.” Other violations had to do with soil erosion. Such “alleged breaches carried the potential for millions of dollars in penalties,” according to the Jan. 31, 2015, daily Press Democrat.

Groups such as the Watertrough Children’s Alliance (WCA) and Apple Roots kept a close eye on Hobbs and reported violations to various regulatory offices. WCA still has Hobbs in court this month. Such barons apparently feel that they do not need to follow the rules that smaller wineries follow and that such settlements are merely costs of doing business.

Concerned citizens advocate “moderation” when it comes to proposals that are basically commercial and industrial, rather than agricultural, especially when they would be in rural rather than urban areas. The business model morphs from selling wine to selling a ticket to a high-priced event complete with merchandising and retail sales. This requires more traffic and worsens the quality of life for rural people, animals, plants, and the environment as a whole.

The new acclaimed documentary “The Russian River: All Rivers—The Value of an American Watershed” documents the damage that the wine industry does. On the March 4 popular KQED radio “Forum” program director William Sorensen said, “We need more sobriety” by the wine industry.

WINERY TO REPLACE THE COMMONS

Owners of another premium Napa winery, Bouchaine, recently donated $500,000 to create The Wine Spectator Learning Center at SSU, which was named after a prominent wine industry publication. The center would be located where what for decades has been The Commons. How ironic–a Wine Center replacing the building where students, faculty, staff, and guests would gather to eat, study, socialize, invite family members, and attend meetings. Most students are even too young to legally drink wine, though many student residences on campus are named after grape varieties.

Such premium wineries take more than their fair share of our commons—water, air, and land. They treat these life-giving elements like commodities to be bought and sold, rather than to be shared as essential for human, animal, plant life, and nature itself.

Though estimates vary, it takes around 29 gallons of water to produce one glass of wine. Water is necessary for irrigation, cleaning floors, walls, barrels, grapes and bins, frost protection, and other necessary purposes to produce wine.

Most of the grapes for such large wineries need to be trucked in, processed in factories, and then trucked out as wine. Their greenhouse gas emissions worsen chaotic climate change and pollute the air, water, and land. The money goes mainly to the owners and investors, whereas nature suffers. The majority of the dollars leave our local economy, benefiting only a few.

California is in a four-year drought predicted to be long-lasting. Residents are asked by Gov. Jerry Brown and local government officials to conserve our limited common water. Meanwhile, the wine barons can use as much as they can buy, thus depriving the rest of us from equal access. Some rural residents report that their wells go dry when a winery moves in next door.

Sonoma County already has over 60,000 acres of grapes, but only slightly over 10,000 acres of food crops. Good growing land in Sonoma is now too expensive for most people to purchase. Mono-crops are dangerous. They are more vulnerable to pests. Wine is historically a boom and bust crop. Premium wines are still booming, but they are likely to bust. What then? Including diverse food crops and biodiversity in ones vineyards is part of the solution, as we head into uncertain times.

Unfortunately for we common people, the wealthy banker Sandy Weill, the Chinese developer, the Wagners, and the new Wine Center set a precedent. It is likely to draw more such elite wineries here, unless existing rules are enforced and more regulations made to protect the life-giving commons and the public’s equal access to these resources.

Fortunately, some residents are studying and reporting about this trend. Preserve Rural Sonoma County (PRSC) is a new group that just emerged; it currently focuses on the Dairyman Winery. Members have already done extensive research and published commentaries and letters critical of such developments in the local daily, various weeklies, monthlies and online publications. They are fundraising, creating a website, contacting traffic, water, and legal experts to research and testify at public hearings and in court.

PRSC has met with residents in nearby Napa County concerned about similar issues, especially the expansion of wineries into event centers in rural areas, which compromise the eco-system and the quality of life. “A winery is a processing facility, not ag,” commented an activist from the Citizen’s Voice St. Helena group. “The winery rush is beginning to feel like a gold rush. Such large wineries are like an invasive species with their new business model,” she continued. “These people are developers in farmers overalls,” added Sonoma County grapegrower Bill Shortridge.

One recent accomplishment was when Sonoma County’s Planning Commission turned down, by a unanimous 5-0 vote, an application this year by celebrity chef Guy Fieri to establish a winery/restaurant in a rural area outside Santa Rosa. This was only the second time that a winery application was turned down in decades. A citizens’ group mobilized 150 people to appear at a public zoning hearing to testify against it.

In addition to groups organizing against the proliferation of wineries in the contiguous Sonoma and Napa counties, residents are also complaining in the nearby Lake County. A new 40-acre vineyard has stimulated residents to organize the Hidden Valley Watershed group. They have hired an attorney, who has written a letter to their Board of Supervisors.

“Major concerns with the development include its potential effects on Hidden Valley’s water quality and long-term quantity, as well as air quality,” according to a Feb. 23, 2015, article in the Lake County Record-Bee. “Some residents are also expressing grievances with how the county’s initial study of the project has written off these potential effects of the development as less than significant.”

“It could put at risk the welfare of a lot of people in terms of water availability, quality and air pollution and it’s really for the benefit of just a few people,” resident Will Tuttle said to the Lake County newspaper. “The county is just rubber stamping this. We have to look ahead to our future; corporations don’t always do that but the county should.”

Mendocino County, immediately north of Sonoma, is also experiencing the growth of its wine industry. Their AVA (Anderson Valley Advertiser) has been publishing well-researched articles for years by Will Parish about the wine industry in the North Bay.

A movement against the expansion of rural wineries grows throughout the North Bay. Residents demand that applications should include an Environmental Impact Report (EIR) and conform to the rules of CEQA (California Environment Quality Act). Demands grow for moratoriums on all new wineries in Sonoma and Napa Counties, especially those seeking to be industrial, commercial event centers, located away from urban centers, compromising the quality of rural life and nature.