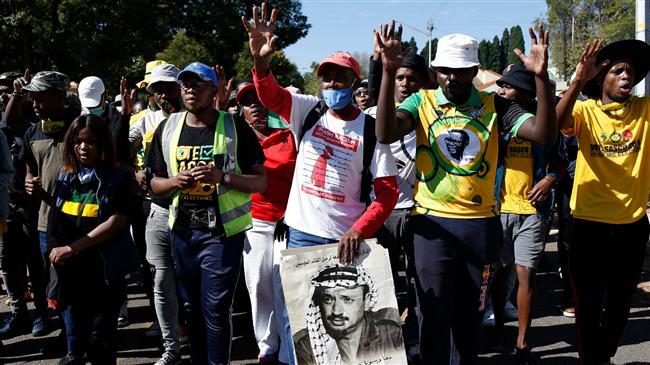 Dockworkers in the South African port city of Durban have refused to offload cargo from an Israeli ship.

A show of solidarity with Palestinians, and protest at Tel Aviv’s military aggression against the besieged Gaza Strip.

The South African Boycott, Divestment and Sanctions (BDS) Coalition announced on Friday that the dockworkers with the South African Transport and Allied Workers Union (SATAWU) will not discharge the cargo belonging to Israel’s Zim Integrated Shipping, following a call from the Palestine General Federation of Trade Unions.

#DockworkersWithPalestine – workers on the march at Durban harbour – no Israeli apartheid Zim Line ships in our ports! @BDSmovement pic.twitter.com/OmjgNnuq8R

Also on Friday, the South African BDS Coalition and its partners, among them SATAWU, will stage a rally in Durban to celebrate the stalling of the Israeli vessel, the movement said.

They will also demand that the South African government-owned Transnet port company stop transportation of goods to or from the Israeli-occupied territories through South African ports.

She added, “We salute our dockworkers and will continue to work in struggle with them to ensure that South Africa becomes an ‘apartheid free zone’.”

Dadoo said the coalition hopes that the South African government “takes their lead from the dockworkers and immediately cuts all ties – trade, diplomatic, cultural, academic and sport – with the oppressive Israeli regime.”

The development comes just days after dockworkers in the Italian city of Livorno refused to load an arms shipment onto the Asiatic Island, another ship belonging to the Israeli company Zim.

The L’Unione Sindacale di Base (USB) trade union said in a statement that the port would not be an accomplice in the massacre of Palestinians as the cargo contained weapons and explosives that could be used to kill the Palestinian population.

A ceasefire came into force in the Gaza Strip in the early hours of Friday morning after Egypt brokered an agreement between Israel and Palestinian resistance groups to halt 11 days of conflict.

At least 232 Palestinians, including 65 children, were killed in the Israeli bombardment of the densely populated coastal enclave.

South Africa President Cyril Ramaphosa has come under pressure to cut all ties with Israel following the latest Israeli aggression against Gaza.

Ramaphosa said on Monday that “we stand with the Palestinian people in their quest for self-determination, but also in their resistance against the deprivation of their human rights and the denial of their dignity,”

He noted that the sight of a group of Palestinian families forced out from their homes in the Sheikh Jarrah neighborhood of the occupied East Jerusalem al-Quds to make way for Israeli settlements reminded him of what happened to millions of South Africans, including his own family, during the apartheid era.

“It was a pain and humiliation faced by my own family, and by many South African families. My family was forcibly moved to different parts of the country on two occasions,” Ramaphosa stated.

He said being forced from one’s home at gunpoint is a trauma not easily forgotten, which is carried across generations.