Above photo: An aerial view shows the darkened ground of an oil spill which shut down the Keystone pipeline between Canada and the United States, located in an agricultural area near Amherst, South Dakota. REUTERS/Dronebase

South Dakota regulators said they could revoke TransCanada’s permit for the 7-year-old Keystone Pipeline if an investigation into a large oil spill discovered last week concludes the company violated its terms. If that happens, the company would have to correct any issues—in the worst case, even replace part of the pipeline—before oil shipments could resume.

The scrutiny comes as more challenges emerge to the company’s recently approved expansion of its pipeline system: the Keystone XL.

On Nov. 16, TransCanada reported that 210,000 gallons, or 5,000 barrels, of oil had spilled from its existing Keystone Pipeline near Amherst, South Dakota, and that it had shut down the pipeline in response. It was the third major spill in the region for the pipeline, which began operations in 2010.

“What concerns me personally is the number of leaks that have taken place in a short period of time,” Gary Hanson, vice chairman of the South Dakota Public Utilities Commission, said. “With a pipe as young as it is, this is very disconcerting.”

Hanson is one of three commissioners on the South Dakota Public Utilities Commission. All three have said that any violation of the company’s construction and operation permit could result in a temporary suspension or cancellation of the pipeline permit.  The U.S. Pipeline and Hazardous Materials Safety Administration (PHMSA) is also investigating the cause of the spill and will have to approve any restart of the pipeline.

“We really want to be on top of this and make certain that whatever the problems are they are rectified,” Hanson said. 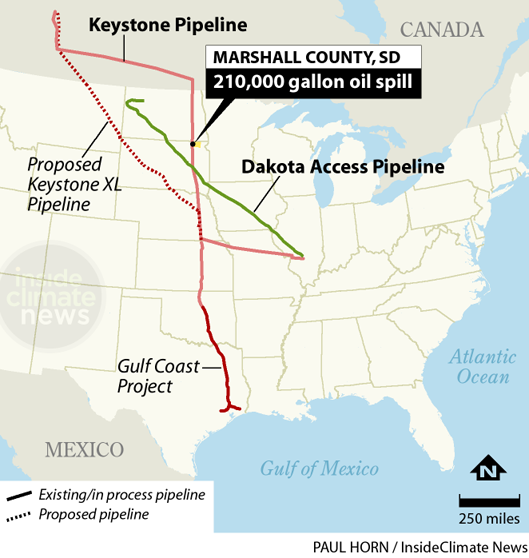 TransCanada officials say they built and have operated the pipeline in full compliance with state regulations.

“We are cooperating with South Dakota PUC officials and other regulatory agencies including PHMSA and the South Dakota Department of Environment and Natural Resources as we work to investigate the cause of this incident and move forward to repair the pipeline and remediate the site,” Terry Cunha, a spokesperson for the company said.

The federal government recently fined the company $135,400 for safety violations involving corrosion control along the existing Keystone pipeline system, and regulators have opened 13 enforcement cases against TransCanada since 2011 involving the same pipes. Crude oil prices climbed 2 percent on Wednesday amid the shutdown, rising to their highest levels in two and a half years.

TransCanada has yet to disclose the type of oil involved in the recent spill, although the Keystone pipeline primarily transports diluted bitumen or tar sands crude oil, which is exceedingly difficult to clean up if it enters waterways.

The company had removed over 24,000 gallons of oil using vacuum and excavation equipment as of Wednesday, Cunha said.

Four days after the spill was reported, the Nebraska Public Service Commission granted a key approval for the Keystone XL pipeline, though not for the company’s preferred route through the state.

The change in route means TransCanada will face new regulatory hurdles and legal challenges and will have to secure easements from a new group of landowners.

In written testimony submitted to the Public Service Commission prior to Monday’s ruling, TransCanada officials said the alternative route that was ultimately chosen would cross more land that is “highly erodible” and would pass through the habitat of more endangered species than the route the company preferred.

As of Wednesday, more than 30 organizations and 10,000 individuals pledged to oppose the pipeline through peaceful resistance actions, similar to those seen last year against the Dakota Access Pipeline, should construction on the pipeline proceed.

The Rosebud Sioux Tribe of South Dakota announced on Tuesday that it has retained the Native American Rights Fund to represent the tribe in its opposition to the pipeline, which would skirt their reservation. “Keystone XL will need permission from the Tribe, so this is not over,” NARF Staff Attorney Natalie Landreth said in a statement. The Cheyenne River Sioux Tribe of South Dakota has also vowed to fight the project.

A federal judge ruled on Wednesday that a lawsuit brought by environmental and landowner groups over the Trump administration’s approval of the cross-border permit for the Keystone XL pipeline can proceed despite attempts by the administration and TransCanada to have the lawsuit thrown out.

The opposition, combined with the low price of oil, could scuttle the project entirely.

“The odds are very long for them, and the delay, no matter what happens, is likely to stretch on for years,” said Joshua Axelrod, a policy analyst with the Natural Resources Defense Council. “Delay is not their friend. Tar sands production is expected to peak in the next few years, certainly within the next decade, and if they are just getting around to building a pipeline sometime in that timeframe, it’s not an economically viable project.”

TransCanada said earlier this year that it would make a final decision of whether or not to continue with the project in December.

Phil McKenna is a Boston-based reporter for InsideClimate News. Before joining ICN in 2016, he was a freelance writer covering energy and the environment for publications including The New York Times, Smithsonian, Audubon and WIRED. Uprising, a story he wrote about gas leaks under U.S. cities, won the AAAS Kavli Science Journalism Award and the 2014 NASW Science in Society Award. Phil has a master’s degree in science writing from the Massachusetts Institute of Technology and was an Environmental Journalism Fellow at Middlebury College.