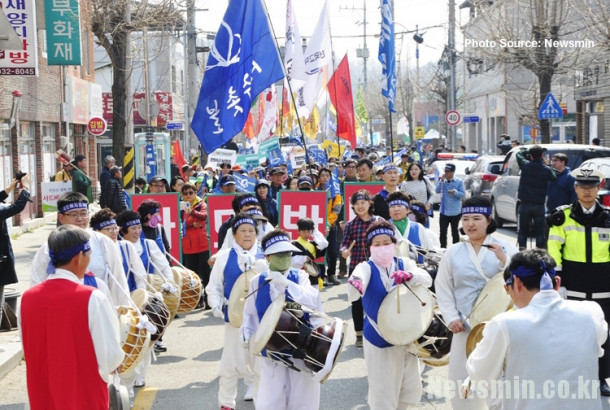 On March 18, approximately 5,000 people from across South Korea gathered in Soseong-ri, Seongju County to protest the deployment of the U.S. Terminal High Altitude Area Defense (THAAD) missile system. The action was organized by a coalition of anti-THAAD task forces composed of residents in Seongju and Gimcheon near the deployment site, as well as the Won Buddhists, and joined by similar task forces formed in Daegu/North Gyeongsang Province and Busan/Ulsan/South Gyeongsang Province, as well as a national task force composed of peace/anti-war organizations and a long list of civic groups.

Grandmas of Soseong-ri: “No THAAD! Never give up!”
Elderly residents of Soseong-ri (a village in Seongju County just 2 miles from the deployment site) joined the national peace march. Leaning on walkers, they marched with high spirits, held up big picket signs and chanted, “Illegal THAAD, back to the U.S! THAAD, go away! Come Peace!”

(Video source — 615TV)
The U.S. recently transported two THAAD launchers and other parts of the THAAD battery to South Korea. Those at the frontlines of the struggle — the residents of Seongju and Gimcheon and the Won Buddhists — have called on people across South Korea to join them in opposing the THAAD deployment. The residents have been holding weekly protests in Soseong-ri, and Won Buddhist priests have been holding overnight prayer sit-ins on Jinbat Bridge, the only road leading to the deployment site.
In response to reports that the U.S. may soon transport the THAAD radar to the deployment site, South Koreans from different regions are coming together to demonstrate the strength of the national opposition. Another national action is planned for April 8.

Won Buddhist Priests Face Police Violence
Following the national peace march in Soseong-ri, Won Buddhist priests set up for a sit-in protest on Jinbat Bridge, which leads to the deployment site. Every night since early March, Won Buddhist priests have been holding overnight prayer sit-in’s on Jinbat Bridge. Due to inclement weather conditions, the priests began to set up a “peace tent” to avoid the rain but were met with violence from the police.

(Video shot by Seongju resident; Video source — OhmyTV)
Without any verbal warning, the police used force to take down and remove the tent. The residents of Seongju and other protesters attempted to help the priests and block the police from destroying the tent. Several were injured in the process. A few of the protesters sustained serious enough injuries to require ambulances to transport them to the hospital.
The Won Buddhists submitted a complaint demanding the police issue an official apology and take measures to ensure that such an incident will not happen again. They also demanded punishment for the police officers responsible for inciting the violence.