Above photo: Voice of People.

South Korea – July 12 marked one year since the beginning of the Seongju residents’ struggle to stop the deployment of the U.S. Terminal High Altitude Area Defense (THAAD) missile defense system.

So far, the AN/TPY-2 radar — the main component of the THAAD battery that will allow the U.S. to track missile activity in North Korea and China — and two of the six interceptor launchers have made their way into the deployment site. The residents of Seongju and South Korean peace activists are still protesting daily, at times putting their bodies on the line, to block the remaining parts of the THAAD battery from entering the deployment site and call for a reversal of the deployment.

Despite the election of a new liberal administration in May, the South Korean government’s response to the protests of Seongju residents has largely remained unchanged. On July 12, 1,500 riot police officers were deployed to deter protesters from blocking military vehicles entering the THAAD deployment site. 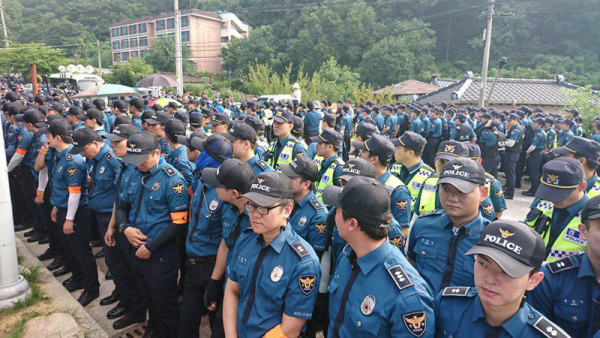 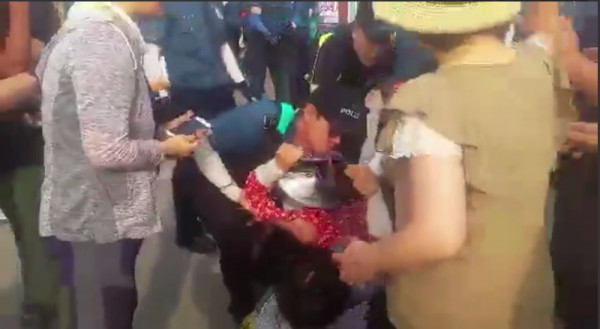 The Seongju residents also face right-wing counter-protesters, who accuse them of being “North Korean sympathizers” and threaten violence. 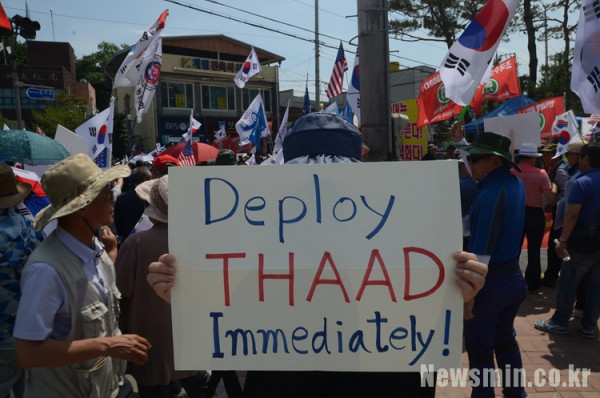 The residents of Seongju and Gimcheon and the Won Buddhists continue to fight with the conviction that peace will prevail. Here is a look back at the past year in the South Korean people’s struggle to oppose the THAAD missile defense system.

On July 7, 2016, the U.S. and South Korean governments announced a joint decision to deploy the U.S. Terminal High Altitude Area Defense (THAAD) missile system in Seongju, South Korea. The decision shocked and outraged the residents of Seongju, who had traditionally supported the conservative party. Then-Prime Minister Hwang Kyo-ahn visited Seongju to calm the residents and persuade them to accept the government’s decision but was met with a shower of eggs and water bottles.

By the third week of protests, the Seongju Task Force put out a clear message to the South Korean government saying the THAAD battery does not belong anywhere on Korean soil:

Clearly, the government’s suggestion of a new deployment site is nothing more than an extemporaneous move to deflect public criticism. The residents of Seongju know that the government is putting forth an impossible idea as a so-called alternative with the intention of creating division among us. What we fight for is the complete reversal of the THAAD deployment decision, not merely relocating it to a different location. Never forget that Seongju is Korea and Korea is Seongju. 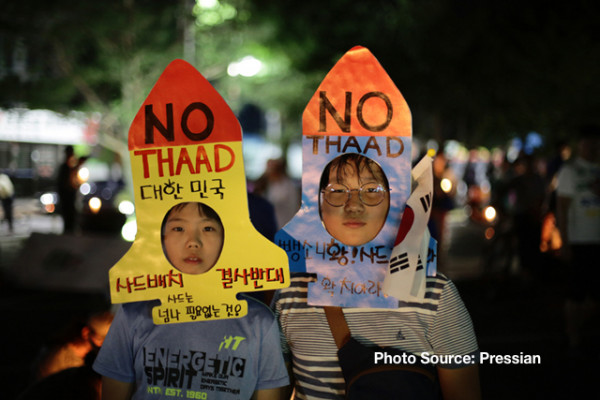 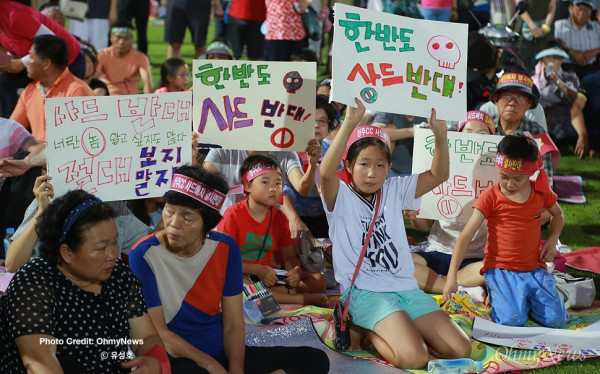 Feeling betrayed by the conservative party for supporting the decision to deploy the missile defense system, the Seongju residents held a mock funeral procession for right-wing president Park Geun-hye and the ultra-right Saenuri Party.

The Seongju struggle garnered national and international support. On August 14, 10,000 people in Seoul gathered to protest the THAAD deployment. Peace activists from the U.S. like Bruce Gagnon and Will Griffin of Veterans For Peace joined to speak out against the U.S. THAAD system.

On August 15, 908 people in Seongju demonstrated their commitment to the anti-THAAD struggle in a head-shaving ceremony.

Residents from the city of Gimcheon joined the movement against the THAAD when they heard that the deployment site would be moved to the Lotte Skyhill Golf Course located on the border of Seongju County and Gimcheon City.

Photo – Gimcheon residents holding signs that say, “Immediately rescind the decision to deploy the THAAD system that threatens the people of Gimcheon!!!”

The Gimcheon Task Force to Oppose the THAAD Deployment was launched to organize the residents and coordinate nightly candlelight protests in Gimcheon City.

Won Buddhists–the sacred birthplace of their leader being near the new deployment site–formed their own emergency task force to oppose the THAAD on August 31. 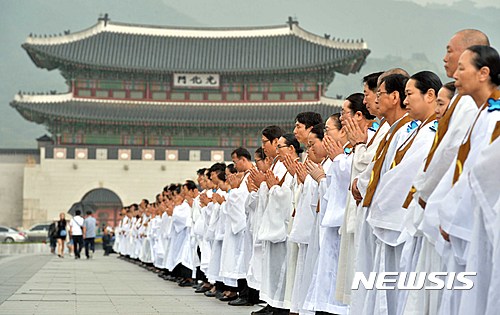 Through the summer and the fall of 2016, Seongju and Gimcheon residents as well as Won Buddhists continued to hold nightly candlelight protests. 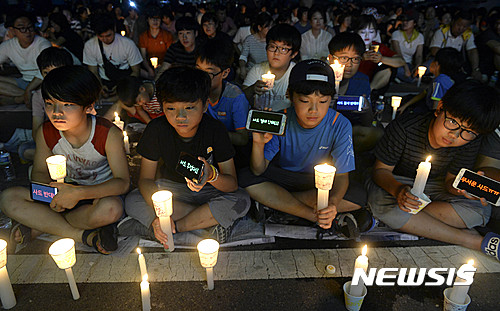 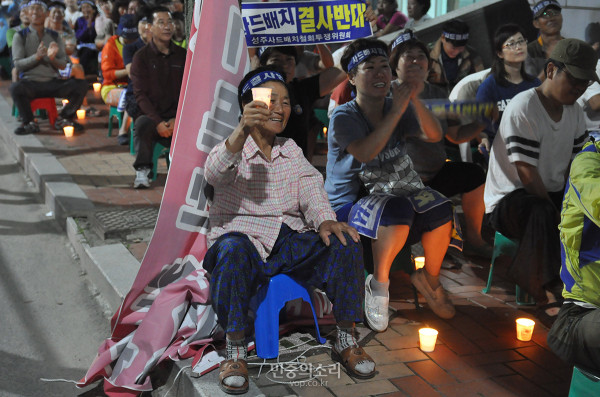 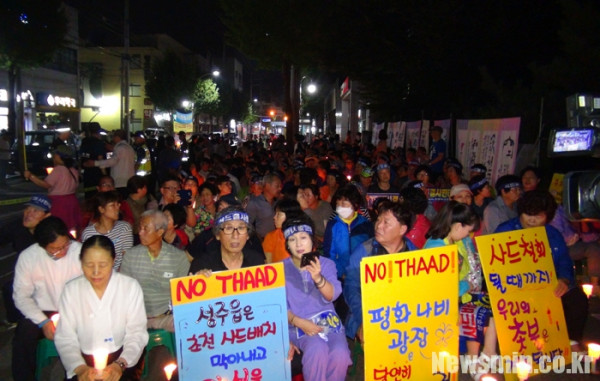 Seongju and Gimcheon residents also traveled to Seoul to protest in front of the U.S. Embassy. 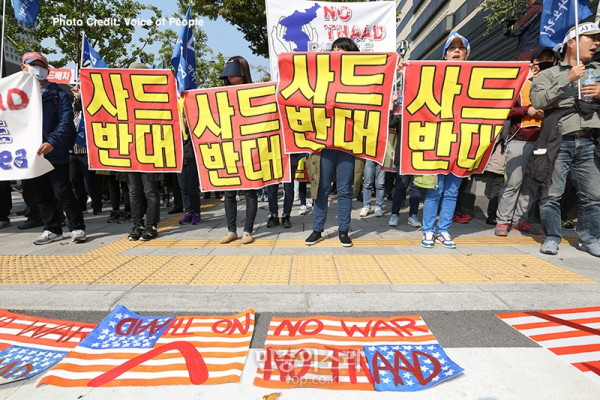 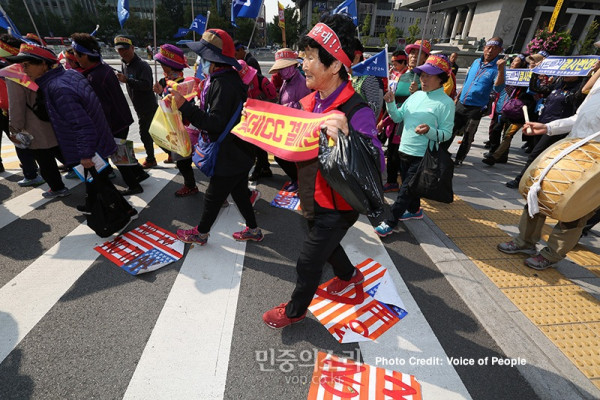 January – February 2017: Standing up to the Defense Ministry’s backdoor deal with Lotte

Even in the midst of the Park Geun-hye administration’s corruption scandal, the Defense Ministry made a backdoor deal with the Lotte corporation to obtain the right to the company’s golf course in Seongju/Gimcheon and turn into the deployment site for the THAAD system. The people of Seongju and Gimcheon protested in front of Lotte department stores and vowed to boycott Lotte products. 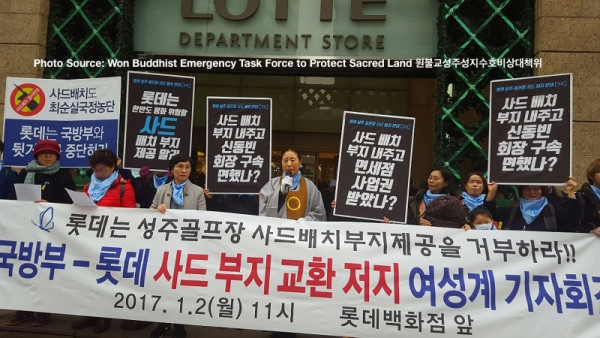 On February 27, however, Lotte finalized its agreement with the Defense Ministry to give up its golf course in exchange for another plot of land owned by the South Korean military. Shortly after, the golf course was handed over to the United States Forces Korea (USFK), which prepared to transfer parts of the THAAD battery into Seongju.

March 2017 to Present: Soseong-ri as the last line of defense for peace

With the golf course secured and its ownership transferred to the USFK, the residents of Seongju vowed to put their bodies on the line to block the THAAD system from entering the deployment site. The small village of Soseong-ri, just two miles from the deployment site, became the new battleground for the struggle to stop the THAAD deployment.

On March 18, close to 5,000 people from across South Korea gathered in Soseong-ri for a national peace action.

The peace action re-energized the anti-THAAD struggle, but it was also the first time the people of Seongju saw firsthand the South Korean police using excessive force against South Korean people to protect the interests of U.S. forces.

Despite the police violence, the residents of Soseong-ri along with the Won Buddhist Task Force to Oppose the THAAD successfully blocked several attempts by the USFK and the South Korean Defense Ministry to transport military vehicles into the deployment site. 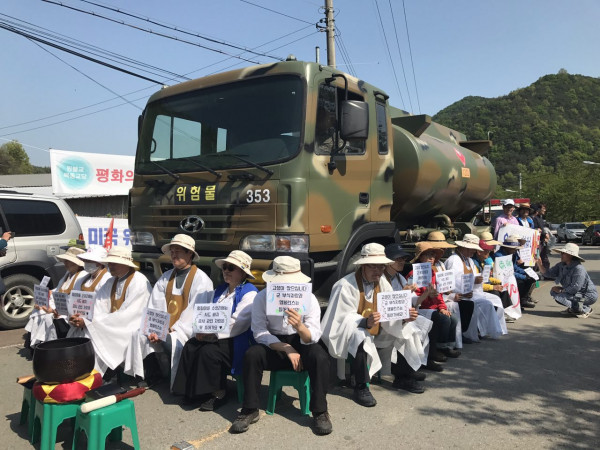 But on April 26, in the middle of the night without any warning, the USFK and the South Korean Defense Ministry forced key parts of the THAAD system into the deployment site.

After an entire year of daily protests, the new Moon Jae-in administration paused the deployment process and ordered an environmental impact assessment.

On June 24, 3,000 protesters stood hand-in-hand to surround the U.S. Embassy in Seoul and demand the reversal of the U.S.-South Korea decision to deploy the THAAD battery. 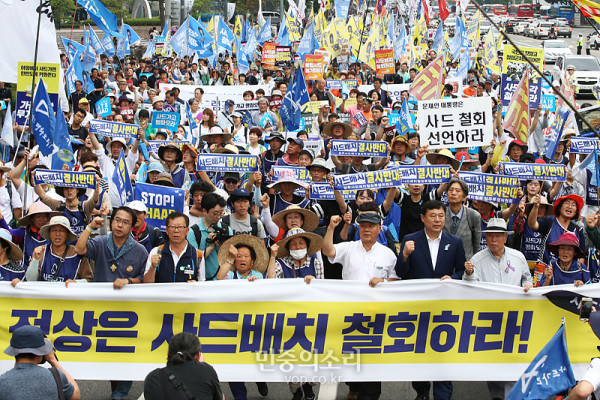 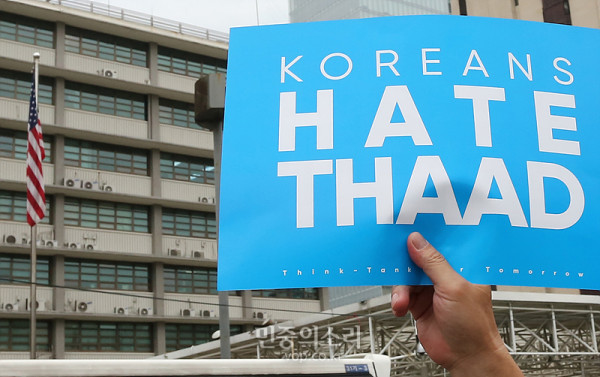 Members of Moon’s cabinet have publicly said that South Korea has no intention of re-negotiating the THAAD deal made with the United States. The South Korean people, including the residents of Seongju and Gimcheon and the Won Buddhists, continue to fight and call on Moon to reverse the THAAD deployment.