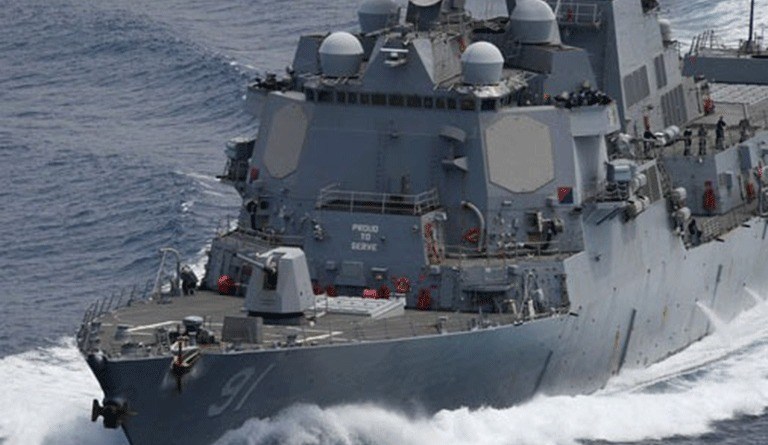 Above photo: US warship from Southern Command.

This Wednesday it was learned that the United States Navy (US) sailed into Venezuelan waters, “to challenge the excessive claim of Venezuela on June 23”, when the Minister of Popular Power for Defense, G / J Vladimir Padrino López , warned that a US ship entered 30 miles north of the Venezuelan coasts, calling the event a threat.

According to US military forces, the “Freedom of Navigation” operation in the Caribbean Sea is being carried out “outside 12 nautical miles off the Venezuelan coast.” However, the ship sailed through an area that according to international law belongs to Venezuela.

“We will exercise our legal right to freely navigate international waters without accepting illegal claims,” argued Admiral Craig Faller, commander of the US Southern Command who directs the Arleigh Burke-class guided-missile destroyer of the US Navy USS Pinckney (DDG 91).

The US regime is in a campaign well covered by local and international media to oust President Nicolas Maduro and *for that it has implemented a criminal and suffocating illegal sanction strategy, along with regular military threats, and support to mercenary attacks against Venezuela.

“The USS Pinckney, as well as other ships of the US Navy and Coast Guard, are currently operating in the Caribbean as part of the President’s enhanced narcotics operation,” the statement said.

According to the Venezuelan Organic Law of Aquatic Spaces, the territorial sea has a width of twelve nautical miles (12 MN) along the continental and insular coasts of Venezuela, and additionally 12 more NM for the Contiguous Zone. International law also establishes 200 NM of Exclusive Economic Waters.

Article 16 of this norm establishes that the passage of a ship through jurisdictional waters ceases to be “innocent” when the foreign ship makes threats or uses force against the sovereignty of Venezuela or violates the principles of Internal and International Law set forth in the UN Charter.