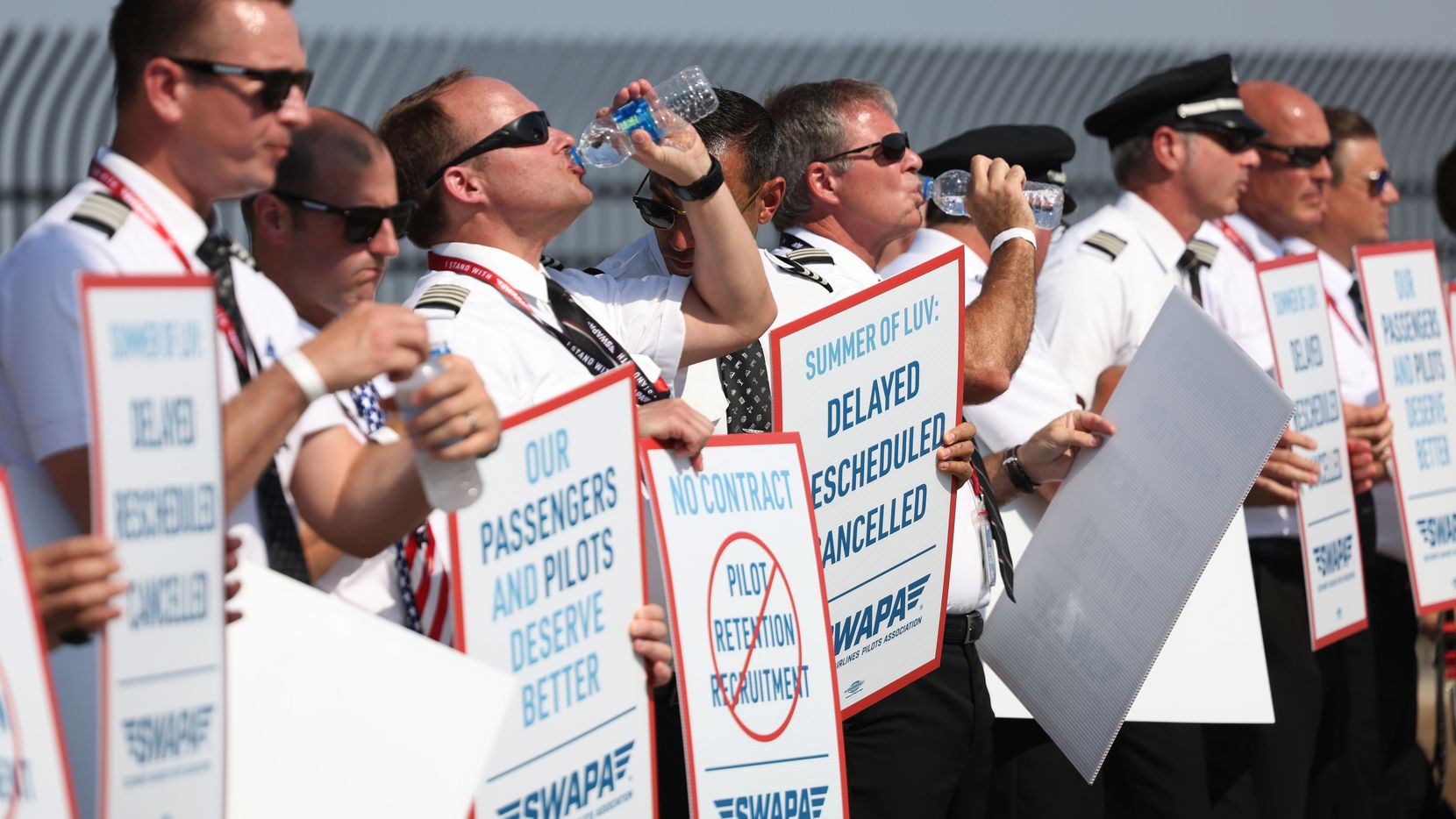 The Airline’s Union Pilots Are Protesting Amid Contract Negotiations Over Scheduling Practices.

More than 1,300 Southwest Airlines pilots protested the carrier at Dallas Love Field on Tuesday amid tense contract negotiations, holding signs that read “Our passengers and pilots deserve better” and “Southwest’s operation: From first to worst.”

There were enough Southwest pilots to make a line of sign-holders in front of the entire terminal, with another group inside near ticketing, one on the road leading into the airport and another along Mockingbird Lane outside the airport.

“Our point is that you have enough pilots today to operate the airline,” said Southwest Airlines Pilots Association president Casey Murray. “The problem is you’re misusing them.”

Murray said the company’s pilot scheduling practices puts the carrier at risk for more cancellations and delays during peak summer travel months and busy weekends such as the upcoming Independence Day holiday.

The pilots’ union is bogged in slow negotiations as it looks at its entire contract with the air carrier. Pilots are almost guaranteed to get a pay raise with stiff competition in the industry among all airlines for pilots, but scheduling has been the biggest issue after more than a year of irregular operations, storms and meltdowns that have led to thousands of cancellations and even more delays.

July 1, the Friday before Independence Day, is expected to be the busiest travel day of the summer, with 264,681 possible passengers at DFW International Airport and another 56,670 at Love Field.

Tuesday’s picketing and protest was purely informational, as pilots and other airline employees are not allowed to strike under federal law without going through a lengthy approval process with federal labor regulators.

The union also took out a full-page advertisement in Tuesday’s edition of The Dallas Morning News that read “Neither employees nor customers come first for Southwest Airlines: Our passengers and pilots deserve better.”

“We’re aware that some off-duty pilots are participating in informational picketing today,” Southwest Airlines spokesman Christopher Perry said in a statement. “Southwest Airlines respects the rights of our employees to express their opinions, and we do not anticipate any disruption in service as a result of this single demonstration.”

Not that frustration among pilots can’t lead to slowdowns and disruptions without pilots walking off the job. The union said the company has seen a major uptick in pilots calling out because of fatigue, which can leave the airline short of pilots needed to fly planes.

During periods of storms and other disruptions, Murray said a high number of pilots are being reassigned to new flights, which means adjustments for their schedules later that day and for days to come. At the worst times, there are so many disruptions that pilots begin running into Federal Aviation Administration limits on hours flown or required breaks before flying again. Pilots and flight attendants have complained that flight cancellations and meltdowns have led to nights when they had to sleep on airport floors or shown up to hotels without rooms being booked.

The union contends that Southwest badly needs to update its technology that helps reschedule pilots during disruptions, but it also needs to give pilots more flexibility to pick up extra flying and rearrange trips.

The protests by Southwest pilots come during a tense time in the industry. Pilots at Southwest, American and United Airlines are in contract negotiations, along with flight attendants at many airlines. Customer service employees at Southwest who answer phone calls have twice rejected new contract offers from the company.

American Airlines pilots protested at DFW International Airport in January and have held protests in Miami and New York in the months since.

Southwest has been negotiating with pilots since 2020, although the talks slowed considerably during the COVID-19 pandemic as both sides waited to see what economic conditions would look like once the worst of the travel industry’s slowdown was over. Now, travel demand is robust and airlines are actually limited by their own ability. Ticket prices are high, but planes are full despite crowds and costs.

There is also a shortage of pilots, forcing airlines such as United and American to drop flights, routes and even service to several smaller cities.

“We’ve had staffing challenges,” Jordan said at the company’s annual shareholder meeting May 18. “You’re trying to match the staffing to the schedule that you’ve published.”

The pilots and company are far from a contract and it will likely be months before a new deal is reached. The two sides haven’t even started serious negotiations on pay, which is usually the final and thorniest issue of a new contract.

Jordan has said he expects a new deal to come by about October, a timeframe that Murray said could be achievable.