Southwestern Lakes And Rivers Are Radioactive

NOTE: During the Uranium Rush of the 1950s and 60s, thousands of open pit uranium mines and mills were created. These were subsequently abandoned, and they continue to pollute the air, land and water today. Radiation is an invisible killer. Visit CleanUpTheMines.org to learn more and get involved.

A 26,000-ton pile of radioactive waste lies under the waters and silt of Lake Powell

Beneath the murky green waters on the north end of Lake Powell, entombed within the tons of silt that have been carried down the Colorado River over the years, lies a 26,000-ton pile of un-remediated uranium mill tailings. It’s just one polonium-, bismuth-, thorium-, and radium-tainted reminder of the way the uranium industry, enabled by the federal government, ravaged the West and its people for decades.

In 1949, the Vanadium Corporation of America built a small mill at the confluence of White Canyon and the Colorado River to process uranium ore from the nearby Happy Jack Mine, located upstream in the White Canyon drainage (and just within the Obama-drawn Bears Ears National Monument boundaries). For the next four years, the mill went through about 20 tons of ore per day, crushing and grinding it up, then treating it with sulfuric acid, tributyl phosphate and other nastiness. One ton of ore yielded about five or six pounds of uranium, meaning that each day some 399,000 pounds of tailings were piled up outside the mill on the banks of the river.

In 1953 the mill was closed down, and the tailings left where they sat, uncovered, as was the practice of the day. Ten years later, water began backing up behind the newly built Glen Canyon Dam; federal officials decided just to let the reservoir’s waters inundate the tailings. There they remain today. 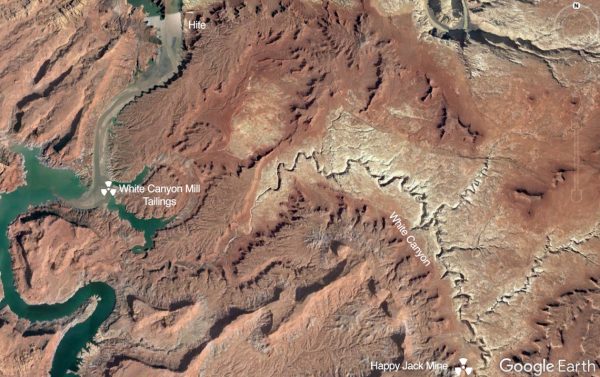 If you’re one of the millions of people downstream from Lake Powell who rely on Colorado River water and this worries you, consider this: Those 26,000 tons of tailings likely make up just a fraction of the radioactive material contained in the silt of Lake Powell and Lake Mead.

During the uranium days of the West, more than a dozen mills — all with processing capacities at least ten times larger than the one at White Canyon — sat on the banks of the Colorado River and its tributaries, including in Shiprock and Mexican Hat on the San Juan River; in Rifle and Grand Junction and Moab on the Colorado; and in Uravan along the San Miguel River, just above its confluence with the Dolores. They did not exactly dispose of their tailings in a responsible way.

At the Durango mill the tailings were piled into a hill-sized mound just a stone’s throw from the Animas River. They weren’t covered or otherwise contained, so when it rained tailings simply washed into the river. Worse, the mill’s liquid waste stream poured directly into the river at a rate of some 340 gallons per minute, or half-a-million gallons per day. It was laced not only with highly toxic chemicals used to leach uranium from the ore and iron-aluminum sludge, a milling byproduct, but also radium-tainted ore solids. (Crass self-promotion: For more details on the Durango mill read my book, River of Lost Souls).

Radium is highly radioactive and a “bone-seeker,” meaning that when it’s ingested it makes its way to the skeleton, where it decays into other radioactive daughter elements, including radon, and bombards the surrounding tissue with alpha, beta, and gamma radiation. According to the Toxic Substances and Diseases Registry, exposure leads to “anemia, cataracts, fractured teeth, cancer (especially bone cancer), and death.”

It wasn’t any better at any of the other mills. In the early 1950s, researchers from the U.S. Public Health Service sampled Western rivers and found that “the dissolved radium content of river water below uranium mills was increased considerably by waste discharges from the milling operations” and that “radium content of river muds below the uranium mills was 1,000 to 2,000 times natural background concentrations.”

That was just from daily operations. In 1960, one of the evaporation ponds at the Shiprock mill broke, sending at least 250,000 gallons of highly acidic raffinate, containing high levels of radium and thorium, into the river. None of the relevant officials were notified and individual users continued to drink the water, put it on their crops, and give it to their sheep and cattle. It wasn’t until five days later, after hundreds of dead fish had washed up on the river’s shores for sixty miles downstream, that the public was alerted to the disaster.

Of course, what’s dumped into the river at Shiprock doesn’t stay in Shiprock. It slowly makes its way downstream. In the early 1960s, while Glen Canyon Dam was still being constructed, the Public Health Service folks did extensive sediment sampling in the Colorado River Basin, with a special focus on Lake Mead’s growing bed of silt, which had been piling up at a rate of 175 million tons per year (!) since Hoover Dam started impounding water in 1935. The Lake Mead samples had higher-than-background levels of radium-226. The report thus concludes:

And so, the billions of tons of silt that has accumulated in Lake Mead and Lake Powell serve as archives of sorts. They hold the sedimental records of an era during which people, health, land, and water were all sacrificed in order to obtain the raw material for weapons that are capable of destroying all of humanity.