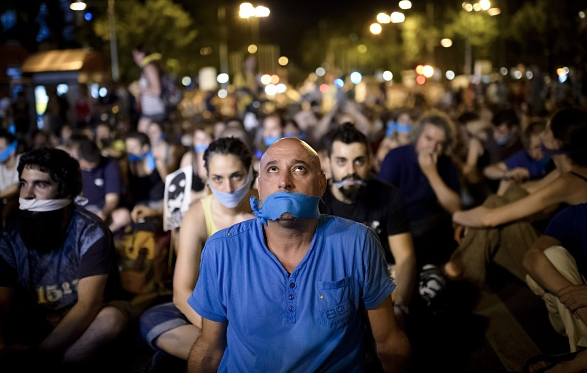 Spain’s controversial new “Public Security Law,” known as “La Ley Mordaza,” or the “gag law,” officially went into effect on July 1 following protests around the country by thousands of protesters.

The law, which has been the target of much criticism from journalists, lawyers associations, the opposition Socialist Party, UN experts and human rights groups, criminalizes and penalizes many common acts of protest like protesting outside of government buildings, disrupting public events, photographing or being openly disrespectful to police officers, trying to stop an eviction, and using social media to make calls for a protest. Those who break this new law face fines ranging from 100 euros ($111) to 600,000 euros ($665,139) and may also face up to one year in jail for some offenses.

In a statement released in March, Amnesty International said that the new law would “unduly restrict the rights of freedom of peaceful assembly and expression.”

“Spain is taking serious backward step for freedom of expression and assembly,” Gauri van Gulik, Amnesty International’s Deputy Director for Europe, said in the statement. “Fear of terror and public disorder should not be utilized to discourage people from protesting peacefully and to increase police impunity.”

On June 30, the day before the new law went into effect, people protested in over 30 Spanish cities. On Tuesday morning in Madrid, Greenpeace activists climbed atop a construction crane above the Parliament building, an act prohibited by the gag law, and unfurled a flag that read “Protest is a right.” In Gijon and Lugones in the north, protesters blocked roads with tires.

Later on in cities across the country, thousands of people took to the streets and marched against the new law and even rallied outside the Parliament building in Madrid, an act which would also be punishable according to the gag law. Many protesters had on actual gags over their mouths as part of the protest.

On July 1, the morning that the new law went into effect, four topless Femen activists scaled the Cibeles fountain in Madrid waving flags saying “Disobey” and “Resist” while chanting for the gag law to be repealed. Protests also occurred throughout the country after the law finally went into effect.

The law was passed by Parliament’s lower house in December 2014 and was passed in the Senate in March 2015 by Prime Minister Mariano Rajoy and his ruling Popular Party’s conservative government. The law comes in response to countless protests against austerity over the last few years. The government defended the new law with Interior Minister Jorge Fernández Díaz telling the New York Times that the law should “only worry the violent ones.” Rajoy also claimed that rather than stifle free speech, the new law would “improve the free exercise of these fundamental rights.” The Popular Party also told El Pais that demonstrations “will be freer because they will be protected from violent elements.”

In contrast, a Metroscopia poll done for Avaaz.org in December 2014 showed that 82 percent of Spaniards were in favor of either softening or completely scrapping the laws.

The first holographic protest on April 10 in Madrid. (PressTV)

Since the law was first proposed, multiple protests have been called against it, and Spanish protesters even began looking for other ways to protest. In one action that was the first ever of its kind, the Spanish activist group No Somos Delito, or “We Are Not a Crime,” decided that if they couldn’t physically put their bodies on the line by protesting, they could try protesting via hologram. On April 10, the group projected protester holograms onto the street in front of the lower house of Parliament and also created a website to introduce people to the futuristic form of protest.

“Our protest with holograms is ironic,” Carlos Escano, a spokesman for No Somos Delito, told El Mundo. “With the restrictions we’re suffering on our freedoms of association and peaceful assembly, the last option that will be left to us in the end will be to protest through our holograms.”

Since then, protests against the gag law have only continued, and activists insist that they will continue protesting regardless of what the law says.

“We are planning to start the disobedience from minute number one, because we think this law is unjust,” Carlos Beneitez, another spokesperson of No Somos Delito, told TeleSUR. “We must disobey and that is exactly what we will do, while always keeping with our sign: the nonviolent action.”