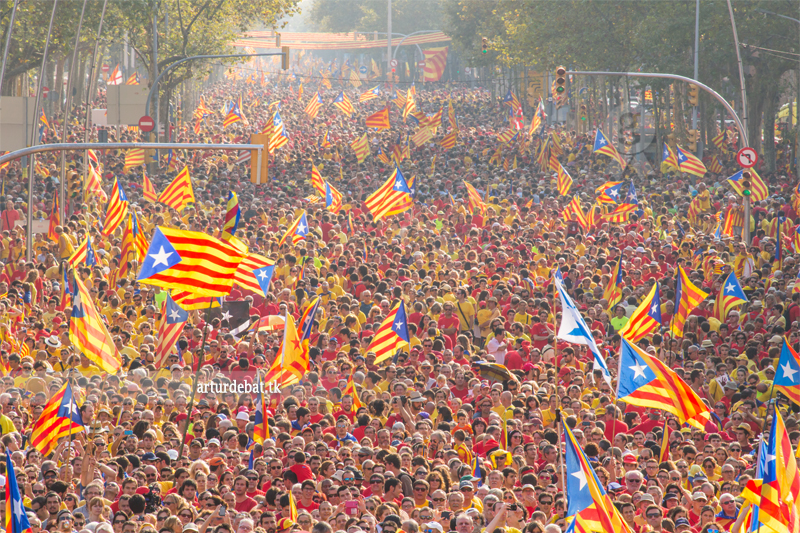 Within minutes of the Monday morning verdict, thousands of protesters descended into the streets to demand the release of the defendants, occupying public squares and blocking highways in cities across the region. In Barcelona, the regional capital, they shut down major arteries such as the Via Laietana and Passeig de Gràcia. According to police figures, 25,000 people protested in Girona, 8,000 in Tarragona, 4,000 in Sabadell and thousands more in dozens of smaller Catalan cities.

Clashes erupted in the early evening as police attacked tens of thousands of people rallying in downtown Barcelona and marching on El Prat airport. Shouting “Do it like Hong Kong,” protesters attempted to blockade and occupy airport terminals. The airport was forced to cancel 108 flights on Monday and 20 Tuesday due to traffic disturbances and the occupation of its facilities.

Police violently charged protesters to prevent them from fully occupying Terminal 1 of the airport, and protesters accused the security forces of firing rubber bullets and noxious foam. French journalist Elise Gazengel was repeatedly beaten by police and tweeted pictures of her bruises.

Overall, 78 protesters were hospitalized, including 38 who were still in hospital at the end of the day. Three people were arrested.

The sentences are the illegitimate result of a show trial that is part of the drive by the ruling class to create the legal framework for a fascistic police state in Spain. The International Committee of the Fourth International (ICFI) has explained its principled differences with the pro-capitalist, secessionist and pro-European Union (EU) perspective of the Catalan nationalist parties. However, it opposes, and calls on all workers to oppose, the prison terms imposed on the defendants despite the state’s failure to prove a case against them.

They are the first political prisoners to be held in Western Europe since the fall of the fascist dictatorships in Portugal in 1974 and Spain in 1978. Their frame-up and imprisonment have far-reaching implications for the working class, the central target of police state repression in Spain and internationally.

Already in June, the Supreme Court demonstrated its politically criminal character by ruling that Generalissimo Francisco Franco became Spain’s legitimate head of state when he launched the fascist coup against the Republic in 1936 that triggered the Spanish Civil War. The Spanish Socialist Party (PSOE) government and the Stalinist-Pabloite Podemos party have maintained a deafening silence on this ruling. However, it gives the court ruling against the Catalan nationalist prisoners the character of a retroactive legitimization of Franco’s fascist repression of left-wing politics.

The Supreme Court found the defendants guilty on various counts of sedition, misuse of public funds and disobedience. It handed down sentences totaling over 100 years in jail, including:

* A draconian fine of €200 per day for 10 months for former regional ministers Santi Vila, Meritxell Borràs and Carles Mundó, who are all barred from running for office for 1 year and 8 months.

The entire framework of the show trial organized by the Supreme Court was illegitimate. The PSOE government invited the recently formed pro-Franco Vox party to assist the state in prosecuting the defendants. It indicted the defendants on charges of rebellion, that is, “rising in a violent and public manner” against the state authority. In fact, they supported a peaceful referendum and called peaceful demonstrations.

There was large-scale violence, but it was organized by the right-wing Popular Party (PP) government in Madrid, not by the referendum supporters. The PP government ordered a brutal police crackdown on peaceful voters that left over 1,000 injured and was witnessed by millions on social networks around the world.

Ultimately, the court stopped short of finding the defendants guilty on the count of rebellion, which could have sent them to prison for many decades. Instead, it found them guilty of the lesser count of sedition, that is, “rising up publicly and in a turbulent fashion” to “prevent by force or in an illegal way” the application of the law or state authority. The sedition ruling itself has draconian implications for basic democratic rights, especially the right to strike and protest.

The court argued that by supporting, helping organize or arguing in favor of the referendum, the defendants encouraged voters to resist the crackdown against them and were therefore guilty of sedition. The other event it cited was a September 20-21 protest called by Jordi Sánchez and Jordi Cuixart against Civil Guard raids on Catalan state buildings aimed at confiscating documents and stopping the independence referendum. At this protest, two Civil Guard vehicles were vandalized, an act Sánchez and Cuixart condemned after having called for peaceful protests.

These rulings create a bogus legal mechanism for the Spanish state to convict anyone calling a protest, however peaceful, of sedition and jail him or her for 15 years. The government need only send police to assault a protest, claim that protesters had violently resisted the assault, and then blame the organizers for “sedition” because they supposedly incited violent opposition to the state.

Workers engaged in legal and constitutionally protected activities such as strikes or protests against home evictions or police raids against migrants are now in great legal jeopardy.

The conviction for misuse of public funds is equally fraudulent. Prosecutors failed to provide evidence of any Catalan government spending on the referendum after September 6, 2017, when the regional parliament passed laws for the referendum (subsequently overturned by the Constitutional Court). Nonetheless, several defendants were found guilty on this charge.

The unanimous support given to the Supreme Court action by the EU and the major EU powers is a warning that there is no constituency in the European ruling class for democratic rights. In every country, the bourgeoisie is moving toward the imposition of a police state and developing legal doctrines along the lines of those propounded by the Nazis in the 1930s. EU Commission spokeswoman Mina Andreeva merely said that the ruling “is and remains an internal matter for Spain, which must be resolved according to its constitutional order.”

Berlin echoed the EU position, invoking Spain’s legal-constitutional “framework” to demand that the population accept the verdict. The French Foreign Ministry expressed its “confidence in the ability of the Spanish authorities to overcome the tensions that appeared in Catalonia.” It added that France “supports the territorial and constitutional unity of Spain.”

The corrupt and reactionary organizations promoted over decades by the Spanish capitalists as the “left” all made clear their support for the ruling. Acting Prime Minister and PSOE leader Pedro Sánchez, who sent thousands of police and Civil Guard units to crack down on the protests, defended it, saying, “Nobody is above the law. In a democracy like Spain, nobody is subject to trial for his or her ideas or politics, but for criminal conduct, as provided for by the law.”

While making mild criticisms of the ruling, Podemos leader Pablo Iglesias insisted that “everyone will have to respect the law and accept the verdict.” He complacently concluded, “It is time for us to roll up our sleeves and work to rebuild bridges between a divided Catalan society and…Spanish society.”

Catalan Regional Premier Quim Torra called for amnesty for all twelve leaders. The Catalan nationalist official said he would seek a meeting with Spanish King Felipe VI and Prime Minister Sánchez, the individuals who are coordinating the crackdown on the Catalan nationalists. He refused to call for civil disobedience, however. His regional interior minister, Miquel Buch, is leading the Catalan regional police’s crackdown on protesters.