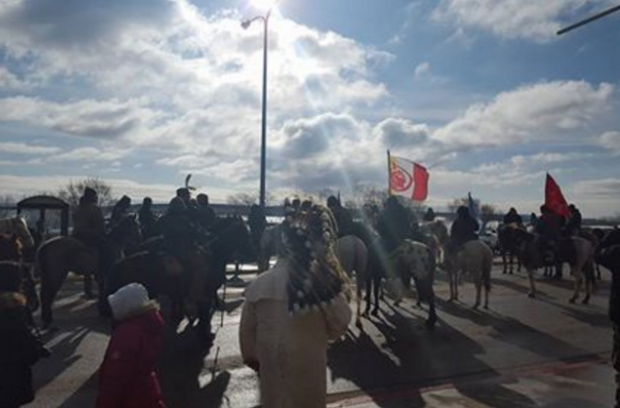 Above Photo: Warriors from the Oceti Sakowin prepare to travel to Spirit Camp. Photo by Waniya Locke

On April 1st, hundreds gathered in Ft. Yates on the Standing Rock Sioux Tribe reservation to show opposition to the construction of the Dakota Access Pipeline, also known as the Bakken pipeline.

Riders on horseback set out from the tribal administration building traveling dozens of miles to the mouth of the Cannonball River where the projected pipeline will go through.

The Dakota Access Pipeline, if built, would transport as much as 450,000 barrels of oil per day from the Bakken oil fields in North Dakota to Illinois with a future capacity of 570,000 barrels per day. Its proposed route would cross the Cannonball River and across the Missouri River, twice.

The proposed pipeline would also threaten significant sites of historical and cultural significance to many Northern Plains tribes, including the Lakota, Dakota, Mandan, Arikara and Cheyenne.

“the place where pipeline will cross on the Cannonball is the place where the Mandan came into the world after the great flood, it is also a place where the Mandan had their Okipa, or Sundance. Later this is where Wisespirit and Tatanka Ohitika held sundances. There are numerous old Mandan, Cheyenne, and Arikara villages located in this area and burial sites. This is also where the sacred medicine rock [is located], which tells the future.” LaDonna Bravebull Allard (Lakota, Dakota)

“We do not need oil to live, but we do need water, and water is a human right and not a privilege.” Waniya Locke (Ahtna Dene, Dakota, Lakota, Anishinaabe)

The proposed Dakota Access Pipeline, is backed by Texas based Energy Transfer Partners, who have received permits for construction from all four states the pipeline will cross. Its permit for construction now sits with the Army Corp of Engineers.

Of paramount concern is the threat the pipeline poses to drinking water.

“The more concerning threat is what this pipeline WILL do to the environment. All pipelines break at some point in their lifetime. Pipelines spill their contents. And in some cases, pipelines explode.” Nicole Montclair-Donaghy (Lakota)

After reaching Cannonball, a Spiritual Camp was set up at the point the pipeline crosses the river. Warriors have committed to staying in the spiritual camp until the pipeline is stopped.

“The dangers imposed by the greed of big oil on the people who live along the Missouri river is astounding. When this proposed pipeline breaks, as the vast majority of pipelines do, over half of the drinking water in South Dakota will be affected. How can rubber-stamping this project be good for the people, agriculture, and livestock? It must be stopped. The people of the four bands of Cheyenne River stand with our sister nation in this fight as we are calling on all the Oceti Sakowin or Seven Council Fires to do so with our allies, both native and non native in opposing this pipeline.” Joye Braun(Cheyenne River)

“Of the many atrocities we as Native Americans have faced and overcame, this is one which will affect not only us but all of mankind. Earth is our mother. We have to protect her.” Virgil Taken Alive (Standing Rock Sioux)