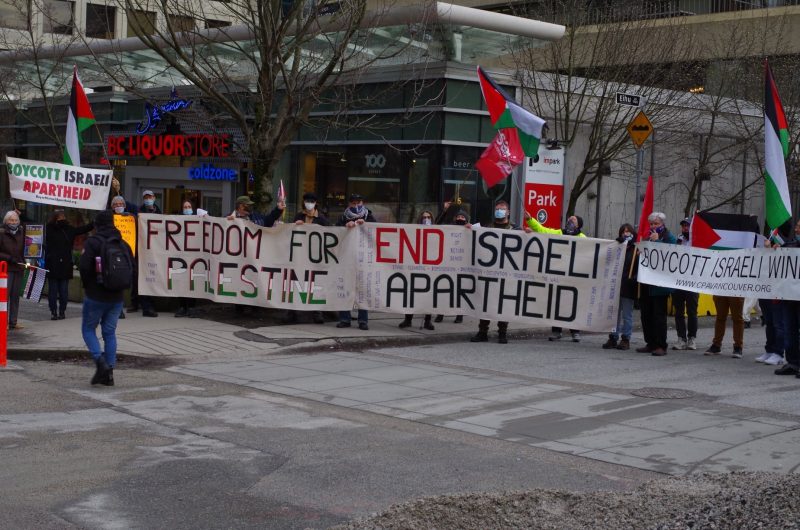 On Saturday, 5 February, activists in Vancouver gathered outside the downtown BC Liquor Store for a picket and literature distribution calling for the publicly owned stores to stop selling Israeli wines, many of which are produced in the occupied Palestinian and Syrian lands of the West Bank and the Golan Heights. Despite repeated calls to provincial officials noting that the sale of these wines means that BC Liquor Stores are directly implicated in war crimes, they have continued to take no action and market these apartheid wines.

The Canada Palestine Association has led the campaign for years to remove these wines from publicly owned liquor stores. Despite the fact that the British Columbia government is headed by the New Democratic Party, and the federal NDP has officially called for an end to trade with Israeli settlements, the NDP-run BC government continues to sell these products in the publicly owned crown corporation stores it is responsible for. Of course, all “Israeli” wines are based on the exploitation of colonized Palestinian land and labor.

Participants in the campaign to boycott Israeli wines distributed hundreds of leaflets to passers-by, many of whom expressed strong support for the campaign or were surprised to learn that these wines are carried in the publicly owned stores. Speakers at the picket also highlighted the settler colonial links between the BC government’s support for and involvement with the ongoing denial of Indigenous sovereignty and RCMP attacks on land and water defenders on Wet’suwet’en land and elsewhere and its ongoing economic ties to Zionist colonialism in Palestine.

Speakers representing Canada Palestine Association, BDS Vancouver – Coast Salish, Independent Jewish Voices, Canada Philippines Solidarity for Human Rights and Samidoun Palestinian Prisoner Solidarity Network urged a boycott of Israeli wines, calling on people to join the campaign and take action by pressuring the BC government to put an end to its complicity in war crimes and colonialism in Palestine.

People and organizations in various parts of the country, including Canadian BDS Coalition members, sent selfies in solidarity, and a Boycott Israeli Wines action was also organized in Victoria, on Vancouver Island.

To join the campaign to call for BC Liquor Stores to boycott Israeli wines and stop marketing apartheid, email BC Finance Minister Selina Robinson at FIN.Minister@gov.bc.ca. You can use this statement by the Canada Palestine Association, endorsed by Samidoun and dozens of other organizations including the Vancouver and District Labour Council and the Vancouver Peace Council, as your guide.