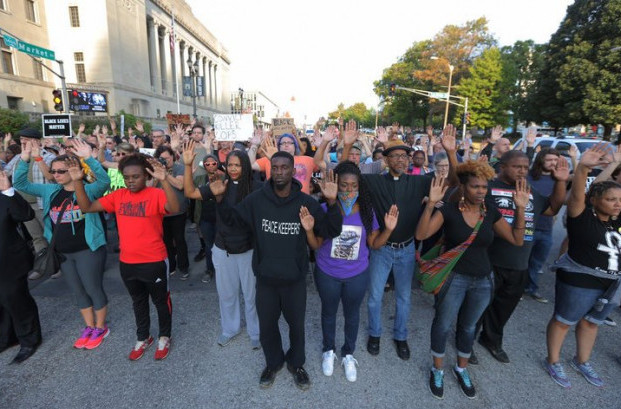 Above Photo: Protesters marched in silence down Market Street in St. Louis on Monday, marking the fourth day of demonstrations since a former police officer was acquitted in the 2011 shooting death of a black man.CreditCristina Fletes/St. Louis Post-Dispatch, via Associated Press

“We’re in control,” announced the head of the St. Louis, Missouri Police Department, Lawrence O’Toole, at a press conference Monday after a weekend of unrest in the city over the acquittal of a white cop who shot a black man to death in 2011.

“This is our city and we’re going to protect it,” O’Toole declared. The escalation of the brutal police crackdown in St. Louis came as the demonstrations entered their fifth day Tuesday.

In sharp contrast to the largely peaceful character of the protests, police have displayed alarming levels of belligerence and arrogance in their repression of protesters. Groups of police officers in riot gear were heard early Monday morning marching through areas forcibly cleared of demonstrators chanting, “Whose streets? Our streets!” mocking protesters with a slogan commonly used at rallies.

The authoritarian declarations of the police chief and his officers came on the heels of the arrest of 123 protesters in a massive roundup on Sunday night. The arrests were carried out using a highly criticized police technique called “kettling,” in which police surround and trap protesters so they cannot escape. They are then arrested en masse for alleged refusal to disperse.

Nearly a day after the mass roundup, police were refusing to release information on how many of the arrested remained in custody. Protesters criticized the police department for keeping many in jail for over 24 hours, despite them having only been charged with misdemeanor crimes, mainly “failure to disperse.”

Undeterred by intermittent rain and a heavy police presence, hundreds gathered outside the St. Louis city jail Monday night to show solidarity with those who remained behind bars. They chanted, “Free our people!” outside the jail.

Dozens of social media videos have emerged throughout the week showing police dressed in riot gear attacking crowds of unarmed protesters of all ages, races and ethnicities, with mace, pepper spray balls, and tear gas.

The situation is so tense that Democratic mayor Lyda Krewson canceled town hall meetings scheduled for Tuesday and Thursday nights. In a statement, she said the kind of comments that would have been heard at the town hall meetings, “are happening in the streets and in my inbox and on social media right now.”

While Krewson’s statement offered a toothless threat to investigate intimidation tactics being used by officers against peaceful protesters, she has allowed the police to operate as a law unto themselves. In fact, Krewson praised the police for doing an “excellent job” during the protests.

While paying lip service to the protestors, Krewson has continued to be a vocal supporter of the police. “Frankly, I don’t think those two positions are dichotomous,” she told the New York Times. “It shouldn’t be hard to understand what protesters are saying, and also at the same time to support law enforcement.”

The upheaval started on Friday after St. Louis Circuit Judge Timothy Wilson found police officer Jason Stockley, 36, not guilty of first-degree murder and armed criminal action in the killing of Anthony Lamar Smith, 24, despite overwhelming evidence of the murder and DNA evidence that Stockley planted evidence at the scene.

Immediately following the announcement of the “not guilty” verdict, crowds of more than 500 people took to the streets. Over the weekend, the number of protesters grew to an estimated 1,000 at their high point. The demonstrations have spread throughout the city and into the suburbs, including marches of hundreds of people through two local shopping malls. On Monday, over 100 high school students walked out of classes and held a rally in the suburb of Kirkwood. Another 250 students protested at a high school in Webster Groves.

Local officials have offered their full support to the police department through their Twitter and Facebook accounts.

Governor Eric Greitens, a Democrat turned Republican and former Navy Seal, made clear he would not tolerate any disturbance. In a Facebook post on Sunday, he wrote, “In the past, our leaders let people break windows, loot, start fires. They let them do it. Not this time.” Greitens has publicly criticized his predecessor’s response to the protests that followed the 2014 police murder of Michael Brown in Ferguson, Missouri.

At a press conference last month, Greitens cited Ferguson as a reason for having more police to patrol St. Louis. He said that since Ferguson, the police “haven’t felt like they’ve been supported to go out and to proactively police.”

Greitens’ concern for the wellbeing of police officers is difficult to stomach. In the three years since the killing of Michael Brown in Ferguson, Missouri, more than 3,000 people across the United States have lost their lives to police violence. Not a single officer, including the one who killed Brown, was held accountable by the Obama administration for the thousands of police murders carried out during his presidency, a trend that will continue under Trump.

Police officers have been given blanket immunity by the highest levels of the political establishment to terrorize poor and working-class communities for decades.

As of Monday, 860 people had been killed by the police in 2017, 13 more than the same time last year. At least eleven people have been killed by police nationwide since the verdict in the Stockley case on Friday. Three people were arrested Monday night during a protest against the killing of Scout Schultz, a white 21-year-old Georgia Tech student.

The unfolding events in St. Louis are representative of mounting tensions between the ruling class and masses of workers in the US, and around the world. Today, twenty people own more wealth than the bottom half of all Americans combined. Those in affluent communities live as many as 16 years longer than their neighbors in poor areas. The unprecedented levels of inequality have created an untenable situation and the American ruling class has taken note.

The emerging protests against the attacks on the working class—over police violence, immigrant rights and health care—are a prelude to massive social upheavals. These struggles will be met with violent repression by the ruling class, who will use the framework of a police state, laid by the Obama administration, to defend their wealth, power and privileges.

The criminality and ruthlessness of the ruling class is embodied in the Presidency of Donald Trump, who has zealously promoted the police and military forces since coming to power.