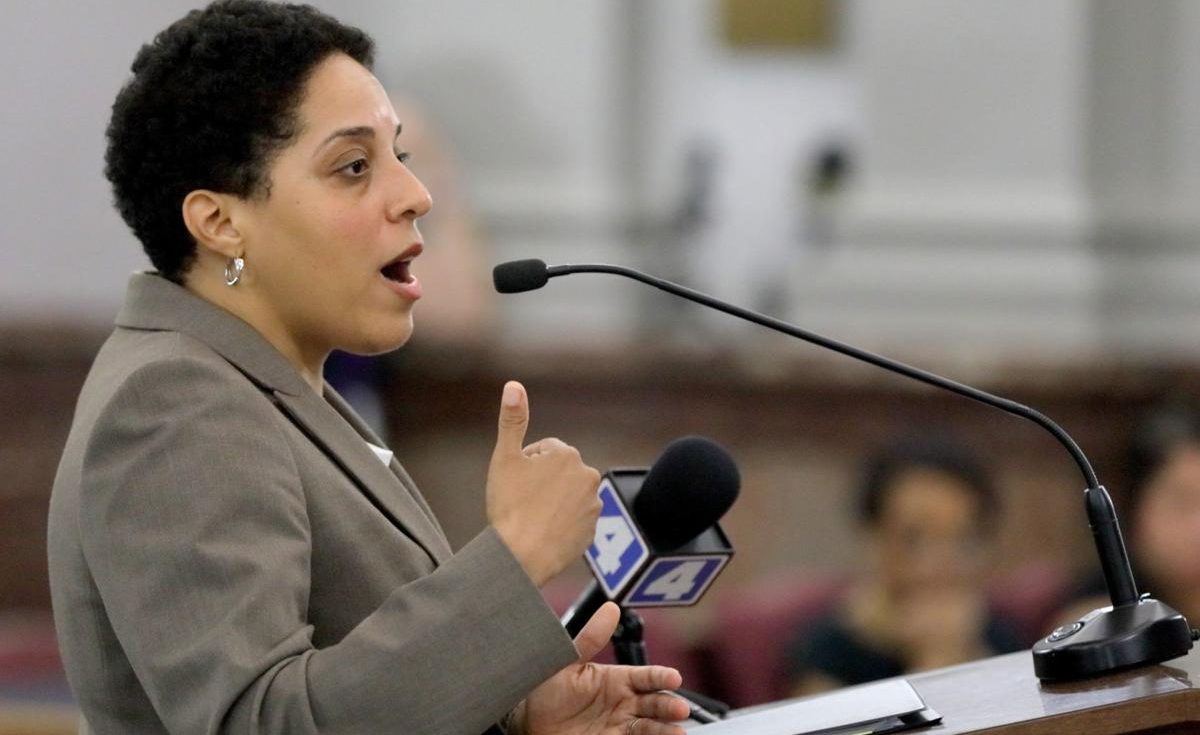 Above photo: St. Louis Circuit Attorney Kim Gardner testifies during a hearing of St. Louis Aldermen Ways and Means committee on Thursday, May 31, 2018. Gardner talked about expenses related to pursuing felony charges against Gov. Eric Greitens and how she wants to use Prop P money to raise salaries in her office, for recruitment and retention. Photo by David Carson, dcarson@post-dispatch.com

St. Louis, MO – The first black woman elected as circuit attorney in the city of St. Louis is taking long-standing racial tensions, specifically between her office and the police department, to federal court.

On Monday, Circuit Attorney Kimberly M. Gardner filed a federal civil rights lawsuit alleging a racist conspiracy to stop her from doing her job. Gardner is suing the city of St. Louis; the St. Louis Police Officers Association and its longtime business manager Jeff Roorda; a former police officer named Charles Lane who sued Gardner’s office; and Gerard Carmody and his children, who are the private attorneys appointed as special prosecutors to investigate her office’s handling of the investigation of former Gov. Eric Greitens.

“Gardner was elected in 2016 on a promise to redress the scourge of historical inequality and rebuild trust in the criminal justice system among communities of color,” says the lawsuit, filed on Gardner’s behalf by three outside law firms from St. Louis, Washington and New York. “Unfortunately, entrenched interests in St. Louis, including Defendants, have mobilized to thwart these efforts through a broad campaign of collusive conduct, including the unprecedented appointment of a white, ethically conflicted Special Prosecutor to investigate the activities of Gardner’s office and a patently overbroad and unconstitutional ransacking of the office’s electronic files.”

Gardner alleges the SLPOA and its officers are at the core of a conspiracy to “thwart and impede her efforts to establish equal treatment under law for all St. Louis citizens.” She cites the 1871 Ku Klux Klan Act, also known as the Civil Rights Act of 1871, to allege violations of her Fourth and 14th Amendment rights.

“The Ku Klux Klan Act was adopted to address precisely this scenario: a racially-motivated conspiracy to deny the civil rights of racial minorities by obstructing a government official’s efforts to ensure equal justice under law for all,” the lawsuit alleges. “The stakes are high. This case cries out for federal enforcement.”

The SLPOA, in a statement not attributed to any specific official, called the lawsuit “frivolous and without merit.” The statement said Gardner’s lawsuit was a “frantic ploy” to deflect from problems in her office.

Gardner says the lawsuit is not an attempt to block Carmody’s prosecution of her former investigator, William Tisaby, who has been charged with perjury in the since-dropped investigation of Greitens over his alleged threat to disseminate a photo he took of a partly nude woman without her permission. Gardner’s lawsuit was filed the same day another of Gardner’s former investigators, Anthony Box, was scheduled to be deposed in that investigation. Gardner’s office has been blocked by a judge from participating in the deposition.

The lawsuit, Gardner said in an interview, “is going to set the tone that the people of St. Louis are not going to allow a select few to stop criminal justice reform. We will reform the system.”

Gardner is part of a national trend of “progressive” prosecutors — many of them black — who campaigned on a platform of making the criminal justice system more fair and equitable for all citizens. Their efforts have included increasing diversion programs, holding police accountable, reducing jail populations and starting Conviction Integrity Units to investigate old cases for possible mistakes.

To date, local courts have blocked Gardner’s attempt to overturn the murder conviction of Lamar Johnson, in which she alleges prosecutorial misconduct and lies by police detectives in obtaining a fraudulent conviction. That case is now before the Missouri Supreme Court.

Gardner’s federal lawsuit is being financed by the legal advocacy fund of a Dallas-based nonprofit called Mothers Against Police Brutality. The organization was founded by Collette Flanagan, a former IBM executive whose son, Clinton Allen, was shot and killed by Dallas police in March 2013. Allen was unarmed.

In nearly every city where a progressive prosecutor has won an election, the local police association has opposed his or her efforts.

But what is happening in St. Louis is unique, says Roy Austin, one of Gardner’s attorneys.

“What we are seeing here is a unique set of circumstances,” Austin said. “We can have a debate on policy. That’s a fair and righteous fight to have. But they are personally trying to destroy Kim. I don’t know of another case in the nation where they have taken all of the prosecutor’s files and handed them over to the police department without any constraints whatsoever.”

In the case against Tisaby, Carmody, the special prosecutor, sought Gardner’s files as part of his investigation. Gardner opposed the request in court but a judge ruled in favor of Carmody.

Austin says the federal lawsuit is not an attempt to “interfere” with Carmody’s criminal investigation.

The lawsuit goes to great lengths to outline what Gardner and her attorneys call a “History of Invidious Racial Animus Within the City, Its Police Division, and the SLPOA,” including detailed descriptions of social media posts by multiple white police officers, many of which were outed by the Plain View Project in 2019. Few of the officers involved in those posts have been disciplined, Gardner’s lawsuit says.

The lawsuit cites the federal prosecution of several St. Louis police officers over the violent beating of black, undercover officer Luther Hall after protests that followed the acquittal of white police officer Jason Stockley in the shooting death of Anthony Lamar Smith.

“The resistance to Gardner’s efforts to improve investigations of police misconduct in St. Louis included threats by Defendants Roorda and SLPOA to reduce protection for members of the City’s Board of Aldermen if they supported Gardner’s proposals,” the lawsuit alleges. “The SLPOA, Roorda, and the Police Division have continued to oppose Gardner’s reform efforts at every turn.”

The lawsuit has interesting timing. It was filed the day before several black, female, progressive prosecutors from around the country are scheduled to meet in St. Louis in support of Gardner.

“This is not about Kim Gardner running for office,” Gardner said, when asked about the timing. “This is about making sure reform-minded prosecutors are able to do their job without fear or retaliation.”