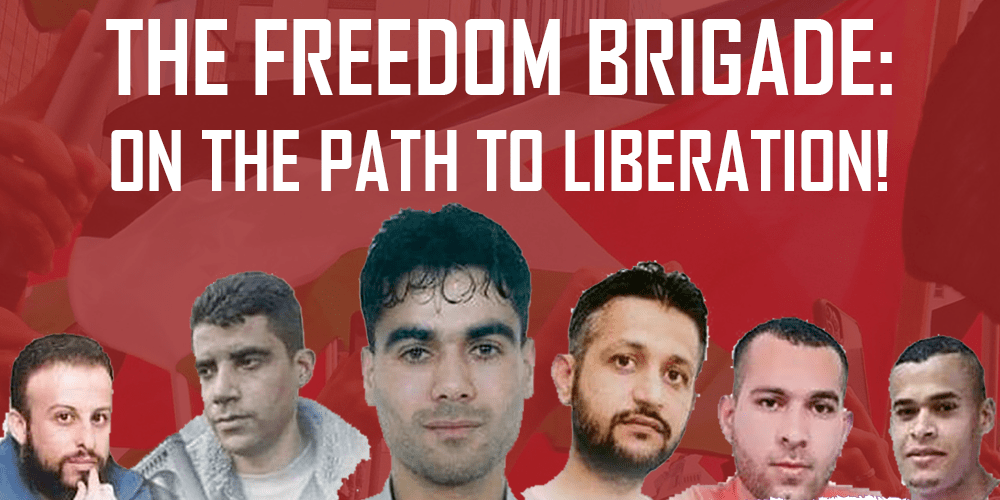 Six Palestinians jailed by the Israeli occupation liberated themselves through a tunnel dug beneath Gilboa prison in the early morning hours of Monday, 6 September. The six liberated prisoners – Mahmoud Abdullah Ardah, Mohammed Qasim Ardah, Ayham Fouad Kamamji, Yaqoub Mahmoud Qadri, Zakaria al-Zubaidi and Munadil Yaqoub Infaat – have remained free despite the desperate attempts of Israeli occupation jailers to pursue them. However, occupation guards have been forcibly transferring, attacking and invading prisoners’ cells throughout Palestine while dragging the freed men’s family members to interrogation. There is an uprising inside the prisons that requires the support of all people around the world who stand with the Palestinian people and the Palestinian struggle for freedom and liberation – join us in taking action!

In Megiddo prison, Ramon prison, and the Negev desert prison, Palestinian political prisoners burned their rooms in resistance to the prison administration’s attempt to transfer the prisoners affiliated with Islamic Jihad. The Handala Center for Prisoners and Former Prisoners in occupied Palestine reported that 7 rooms in Megiddo prison, 4 rooms in the Negev prison and 4 rooms in sections 4 and 5 of Ramon prison have been burned, and that the prisoners’ movement leadership has affirmed that any section that is invaded to transfer detainees will be met with fire.

Palestinians throughout occupied Palestine are rallying in support of the six self-liberated prisoners, whose “Freedom Tunnel,” dug through lengthy months of perseverance with only kitchen utensils for tools, has become a symbol of hope for freedom as well as an example that the technological and military might of the Israeli colonial power has been unable to suppress Palestinian resistance. The tunnel, stretching for tens of meters below Gilboa prison, represents the unquenchable thirst for liberation of imprisoned Palestinians, and the hope of an undying love of freedom. In Ramallah, Jenin, Nablus, al-Khalil, Bethlehem, Jerusalem, Tulkarem, Gaza City, Jabalya camp and elsewhere, organizers are taking to the streets to stand with the liberated prisoners and those resisting behind the walls.

The uprising inside prisons was launched after an attack on the Palestinians detained in the Negev desert prison. Occupation special units stormed Section 6 with weaponry and police dogs, including military forces from a nearby base, prompting the prisoners to burn 7 rooms and resist the invasion. As all of this continues, there are six administrative detainees, jailed without charge or trial, who are continuing their hunger strikes for freedom: Kayed al-Fasfous (for 56 days), Miqdad Qawasmeh (49 days), Alaa al-Araj (31 days), Hisham Abu Hawash (23 days), Raik Sadeq Bisharat (18 days) and Shadi Abu Aker (15 days).

Palestinian political parties and resistance organizations have emphasized the urgent need for action to defend the prisoners and demand their liberation. The Popular Front for the Liberation of Palestine urged Palestinians and their allies everywhere to respond to the call of the prisoners with actions, demonstrations and protests of support.

There are currently 4,650 Palestinian prisoners in Israeli jails, including 520 jailed without charge or trial under administrative detention, 40 women prisoners and 200 child prisoners. Political imprisonment affects all sectors of Palestinian society, and nearly 40% of Palestinian men in the West Bank and Jerusalem have spent time in Israeli detention.

Western imperialist governments are not innocent in the ongoing attacks against Palestinian prisoners and the colonization of Palestine. From the U.S.’ over $3.8 billion annually in weaponry provided to the Israeli regime to the ongoing economic, political and diplomatic support provided by the European Union, Canada, the United Kingdom and others, all of these states are directly involved in the ongoing crimes perpetuated against the Palestinian people. Everywhere in the world, we can and must act now to stand with the Palestinian prisoners and their uprising, and for the liberation of Palestine!

Join us in action:

1. Demonstrations, rallies and street actions – including actions to boycott Israel!

Have a protest or action to free Palestinian prisoners, support the Palestinian struggle for liberation, stand with the Palestinian resistance and boycott Israel and its complicit corporations. Join the many protests taking place around the world — confront, isolate and besiege the Israeli embassy or consulate in your city or country of residence. Make it clear that the people are with Palestine and the liberated prisoners! Send us your events at samidoun@samidoun.net.

Please note: Samidoun has speakers that can participate in your events (in-person and virtual) in Arabic, English, French, German, Dutch, Spanish and other languages. Contact us via email at samidoun@samidoun.net or via WhatsApp at +32466904397 to inquire about a Samidoun speaker!

Creative actions are a wonderful way to spread the word and highlight the struggle of the Palestinian prisoners. The banner hung by Samidoun España in Madrid at the University metro station highlighted the struggle of Palestinian students, while the campaign to symbolically rename streets after Georges Abdallah internationally commemorated his birthday and amplified the demand for his liberation.

These actions only require one, two or a few people. You can even simply poster and sticker around your neighbourhood. Contact us via email at samidoun@samidoun.net or via WhatsApp at +32466904397 if you are looking for image ideas or resources!

The racist, settler colonial state of Israel and its war crimes against the Palestinian people are enabled and backed extensively by the over $3.8 billion each year given to Israel by the United States — targeted directly to support the Israeli occupation military killing children, women, men and elders throughout occupied Palestine. From Canada to Australia to the European Union, Western governments and imperialist powers provide ongoing diplomatic, political and economic support to Israel as well as selling billions of dollars of weaponry to the settler-colonial state. Meanwhile, they also purchase billions of dollars in weaponry from the Israeli state. Governments in league with imperialist powers, such as in the Philippines, Brazil, India and elsewhere, also buy weapons and “security” services — all “battle-tested” on the Palestinian population. Call your representatives, MPs, political officials and demand your government sanction Israel now, cut off all aid, expel its ambassadors, and stop buying and selling weapons!

Please note: Samidoun has speakers that can participate in your events (in-person and virtual) in Arabic, English, French, German, Dutch, Spanish and other languages. Contact us via email at samidoun@samidoun.net or via WhatsApp at +32466904397 to inquire about a Samidoun speaker!

Please contact us via email at samidoun@samidoun.net or via WhatsApp at +32466904397 or over social media to send us your events and actions!