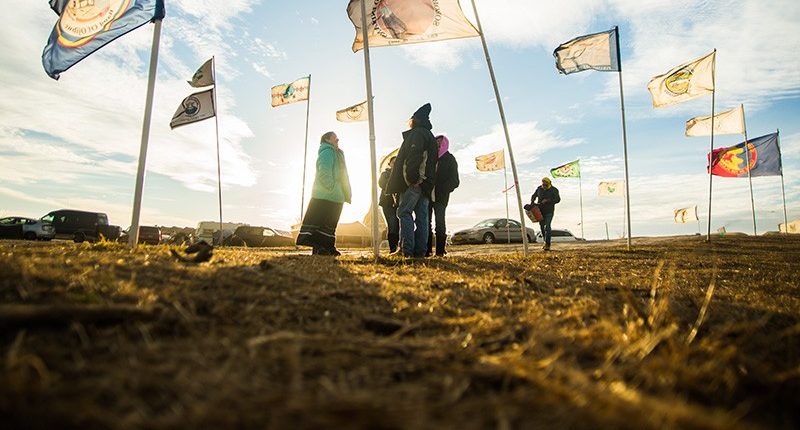 Washington, D.C. —A federal court today granted a request by the Standing Rock Sioux Tribe to strike down federal permits for the controversial Dakota Access Pipeline.

The Court found the U.S. Army Corps of Engineers violated the National Environmental Policy Act when it affirmed federal permits for the pipeline originally issued in 2016. Specifically, the Court found significant unresolved concerns about the potential impacts of oil spills and the likelihood that one could take place. 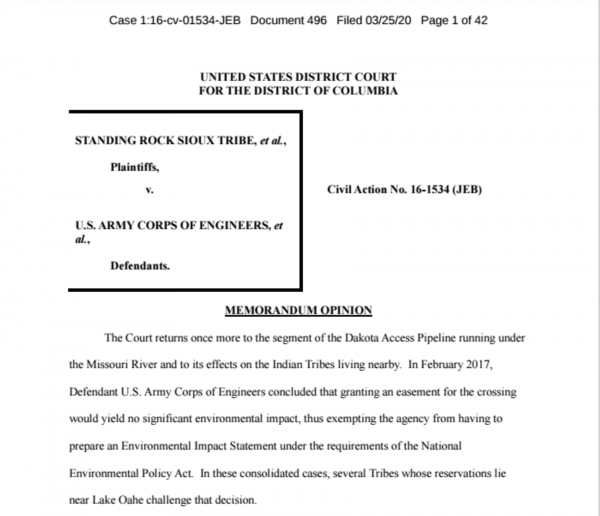 View the entire document with DocumentCloud

For example, the Court criticized the Corps for failing to address the Standing Rock Sioux Tribe’s expert criticism of its analysis, citing issues like potential worst case discharge, the difficulty of detecting slow leaks, and responding to spills in winter. Similarly, the Court observed that DAPL’s parent company’s abysmal safety record “does not inspire confidence,” finding that it should have been considered more closely.

The Court’s decision relies heavily on the technical analyses conducted by the Tribe’s agency directors and expert consultants, repeatedly citing the Tribe’s evidence that the risk of a spill, and the consequences should one occur, are far more serious than ever recognized. The Court ruling validates the Tribe’s hard work over several years to provide technical input into the remand process.

“In this case, the operator’s history did not inspire confidence”

The Court ordered the Corps to prepare a full environmental impact statement on the pipeline, something that the Tribe has sought from the beginning of this controversy. The Court asked the parties to submit additional briefing on the question of whether to shut down the pipeline in the interim.

“After years of commitment to defending our water and earth, we welcome this news of a significant legal win,” said Standing Rock Sioux Tribe Chairman Mike Faith. “It’s humbling to see how actions we took four years ago to defend our ancestral homeland continue to inspire national conversations about how our choices ultimately affect this planet. Perhaps in the wake of this court ruling the federal government will begin to catch on, too, starting by actually listening to us when we voice our concerns.”

“This validates everything the Tribe has been saying all along about the risk of oil spills to the people of Standing Rock,” said Earthjustice attorney Jan Hasselman. “The Obama administration had it right when it moved to deny the permits in 2016, and this is the second time the Court has ruled that the government ran afoul of environmental laws when it permitted this pipeline. We will continue to see this through until DAPL has finally been shut down.”

In December of 2016, the Obama administration denied permits for DAPL to cross the Missouri River, and ordered a full environmental impact statement to analyze alternative pipeline routes and impacts on the Tribe’s treaty rights. Yet on his second day in office, Trump reversed that order, directing that permits be issued. Pipeline construction was completed by June of 2017.

The Standing Rock Sioux Tribe challenged the permits in court and won. The Court ruled then that the environmental analysis had been insufficient because it failed to account for consequences facing the Tribe, and ordered the U.S. Army Corps of Engineers to redo it. However, the judge declined to shut down the pipeline in the interim.

The Army Corps then redid its environmental analysis, but essentially shut the Tribe out of the review process, and concluded that its previous analysis had been sufficient and that nothing needed to change. In response, Earthjustice and the Tribe went back to court. In a motion for summary judgment filed last August, the Tribe asked the Court to shut down the pipeline and order the Corps to conduct a full environmental analysis.

The massive 2016 gathering of Tribes and allies defending Standing Rock Sioux territory from DAPL captured the world’s attention and attracted international media coverage. It helped give rise to a global movement of indigenous resistance to fossil-fuel infrastructure projects.