Above Photo: Native American and other activists have protested the Dakota Access oil pipeline for months near the Standing Rock Sioux reservation around Cannon Ball, North Dakota, even as blizzards have gripped the area. Credit: Scott Olson/Getty Images

The Army Corps of Engineers granted a final easement for the Dakota Access oil pipeline late Wednesday. The action overturned an earlier ruling by the Army Corps to halt construction until it conducted a more complete environmental assessment of the project’s Missouri River crossing.

The Standing Rock Sioux tribe, whose reservation is a half-mile downstream from the crossing, says the pipeline threatens its water supply and sacred sites. Its opposition triggered months of protests. An environmental impact review initiated by the Army Corps in the final weeks of the Obama administration could have delayed the project for years. That review is now canceled. The move follows a Jan. 24 memorandum by President Donald Trump that ordered the Army Corps to expedite the approval.

“Today’s announcement will allow for the final step, which is granting of the easement,” Robert Speer, acting secretary of the Army, said on Tuesday when the Army Corps notified Congress the easement would be granted. “Once that it done, we will have completed all the tasks in the Presidential Memorandum of January 24, 2017.” 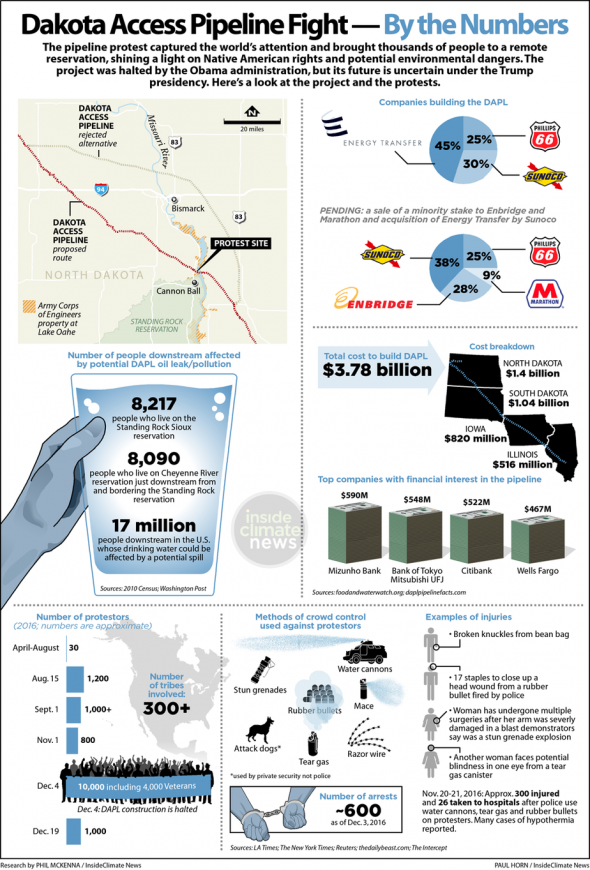 The mile-and-a-half river crossing is the final easement needed to finish the 1,172 mile pipeline, which would connect the Bakken oil fields of North Dakota to an existing crude oil terminal near Pakota, Illinois.

In a letter sent on Tuesday to Rep. Raul Grijalva (D-Az.) of Arizona, ranking member of the House Committee on Natural Resources, the Army Corps said it would issue an easement for the Missouri River crossing in as little as 24 hours. The agency waived its policy of waiting 14 days after notifying Congress before granting the easement.

“In his first few weeks in office our new president has built a resume of discrimination, falsehoods, and sloppy work, and now the decision to trample the sovereignty of our First Americans is the latest entry on a growing list of shameful actions,” he said.

Sally Jewell, Interior secretary under President Obama who was involved in the decision to halt the pipeline, said the Army Corps is “reneging” on its commitments to other federal agencies and to the tribe after promising a full environmental review before granting the pipeline’s easement.

The Standing Rock Sioux tribe will file litigation against the Army Corps within days, according to Phillip Ellis, a spokesperson for Earthjustice, an environmental law firm that is representing the tribe.

“We are a sovereign nation and we will fight to protect our water and sacred places from the brazen private interests trying to push this pipeline through to benefit a few wealthy Americans with financial ties to the Trump administration,” said Dave Archambault II, chairman of the Standing Rock Sioux tribe. “Americans have come together in support of the Tribe asking for a fair, balanced and lawful pipeline process. The environmental impact statement was wrongfully terminated.”

The tribe could also request a preliminary injunction or a temporary restraining order to immediately halt construction beneath the Missouri River, environmental law experts said. Winning such an injunction, however, would likely prove difficult. The tribe would have to show that construction itself, and not a potential spill after the pipeline began transporting oil, would cause irreparable harm.

The pipeline could be completed and begin transporting oil within 83 days, officials with Energy Transfer Partners, the company building the pipeline, said. The project is more than 90 percent complete.

Legal experts disagreed on the tribe’s likelihood of success in challenging the Army Corps’ decision with some saying the Corps is on “solid legal ground.”

Others said the Corps’ about-face immediately after Trump’s inauguration with little explanation other than the President’s memorandum would make the easement difficult to uphold.

“If I were going to maximize the chances that a court would invalidate the decision you would do what the Army Corps did here and provide no explanation for changing your mind.” said Keith Benes, a former state department lawyer that managed the environmental review for the Keystone XL pipeline.

“Its extraordinary because the Army Corps just before President Trump’s inauguration issued a letter of intent to do the full environmental impact statement,” said Sarah Krakoff,  a Native American law professor at the University of Colorado Law School.  “From a legal standpoint it’s hard to understand the change of decision as one that is rooted in deliberation and consideration of the legal requirements.”

Benes said the court wouldn’t necessarily rule that the Army Corps can’t grant the easement without conducting a full environmental review but that the Corps might need to provide better reasons for why it was canceled.

“By moving forward with this critical infrastructure project, President Trump is fulfilling the commitment he made to the American people to build out the necessary infrastructure to unleash the vast potential of America’s energy resources,” Chet Thompson, president and CEO of the American Fuel & Petrochemical Manufacturers, said.

“The days of slow-walking and obstructing pipeline projects are clearly over,” said Thomas Pyle, president of the Institute for Energy Research, a conservative nonprofit. “Today, the Army Corps of Engineers did what it should have done months ago by approving a pipeline that went through a lawful environmental and cultural review.”

Pipeline opponents said they will continue to fight.

“The granting of an easement, without any environmental review or tribal consultation, is not the end of this fight—it is the new beginning,” Tom Goldtooth, executive director of the Indigenous Environmental Network, said. “Expect mass resistance far beyond what Trump has seen so far.”