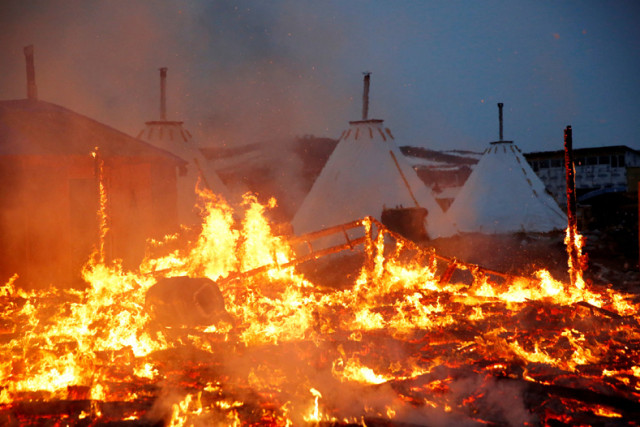 Standing Rocks Is Burning – Our Resistance Isn’t Over

Above photo: A building burns after it was set alight by protesters preparing to evacuate the main opposition camp against the Dakota Access oil pipeline near Cannon Ball, North Dakota, Feb. 22, 2017. Photo:Reuters

Water protectors near Standing Rock have set their camp on fire. It’s an act of defiance against a system of oppression that can only be described as colonial.

The majority of the few hundred remaining protesters marched out, arm in arm ahead of the North Dakota authorities’ Wednesday eviction deadline. An estimated one hundred others refused the state’s order, choosing to remain in camp and face certain arrest in order to defend land and water promised to the Oceti Sakowin, or Great Sioux Nation, in the long-broken Fort Laramie Treaty of 1851.

On these hallowed grounds, history tends to repeat itself. In 1890, police murdered Sitting Bull on the Standing Rock reservation out of suspicion that he was preparing to lead the Ghost Dance movement in an uprising. Two weeks later the United States Cavalry massacred more than three hundred Lakota at Wounded Knee. Over 126 years later, the characters and details of the stories that animate this landscape have changed, but the Cowboys and Indians remain locked in the same grim dance.

The first whirlwind month of Donald Trump’s presidency has brought the injustices of racism, capitalism, and patriarchy long festering beneath the surface of American society out into the open. The eviction of Oceti Sakowin from their treaty lands forces us to confront another foundational injustice, one rarely if ever discussed in contemporary politics – colonialism.

For many, it is contentious and even laughable to suggest that colonialism endures in the present. In the American popular imagination, colonialism ended either when the 13 colonies declared independence from Britain in 1776, or when John Wayne and the 6th Cavalry blasted away Geronimo and the Apaches in Stagecoach.

Colonialism, according to these narratives, is history.

The eviction of Oceti Sakowin suggests otherwise. But in order to see the big picture in all its unjust and ghastly detail, we must take in the full shame of America’s treatment of the Standing Rock Sioux and the first people of this land.

At Standing Rock, 41% of citizens live in poverty. That is almost three times the national average. The reservation’s basic infrastructure is chronically underfunded. Schools are failing. Jobs are few and far between, and 24% of reservation residents are unemployed. Healthcare is inadequate. Many depend on unsafe wells for water. Roads are often unpaved. Housing is in short supply, substandard and overcrowded. If the people of Standing Rock did not take-in their beloved family and friends, there would be mass homelessness.

Dakota Access Pipeline’s price tag of $3.8bn is nearly $1bn more than the entire budget of the Bureau of Indian Affairs. Energy Transfer Partners CEO Kelcy Warren is said to be worth $4.2bn. The pipeline will pour even more wealth into his pockets.

Meanwhile, Standing Rock will remain in poverty on the margins. The most expensive piece of infrastructure in their community will not be the schools, homes or hospitals they desperately need. Instead it will be a pipeline that they have vehemently opposed.

This is how the first people of this land live in the forgotten Bantustans of the American West.

The erasure of indigenous people explains why Dakota Access was rerouted from upstream of Bismarck south to Standing Rock. It explains why pipelines can be hammered through Native communities without regard to their treaties and indigenous, constitutional and human rights. It explains why a multi-billion dollar pipe can be drilled through Standing Rock before long-needed basic infrastructure is built. It explains how, after months of unprecedented protests and visibility, Trump can claim that he received no complaints about the pipeline. It explains how Oceti Sakowin can be wiped off the map.

It is impossible to describe the totality of this picture of land theft, containment, poverty, oppression, policing and extraction as anything other than colonialism.

But from the moment that colonialism ensnared land and life, indigenous people fought it – none more than Sitting Bull and his kin, the Oceti Sakowin.

They have lit a fire on the prairie in the heart of America as a symbol of their resistance, a movement that stands for something that is undoubtedly right: water that sustains life, and land that gave birth to people. In its ashes there is the potential for a more just future for this land, this water, and all the nations and people who share it.