Standing Strong As A Rock

Above photo: Reaction to the news that the US Army Corps of Engineers denied the permit. From IndyBay.

Standing Rock, ND – The power of mobilized, united people was proven once again on December 4, when the Army Corps of Engineers denied a permit necessary for the Dakota Access Pipeline (DAPL) to be laid under the Standing Rock Sioux tribe’s ancestral Missouri River. The Army announced that it would explore alternative routes.

Despite these advances, victory is not assured. Growing the visibility and resistance is the only way to prevent the Trump administration from clearing legal roadblocks so that Energy Transfer Partners, the company behind the $3.7 billion oil project, can proceed. Fierce political pressure is essential to stopping the pipeline from being dug under the river as per the current plan, or from a rerouted access point in another community with less power. 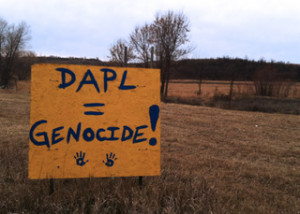 One of the countless signs of opposition to the pipeline.

Trump is not only philosophically in favor of the 1,172-mile pipeline. He is also financially involved, having as much as $300,000 in combined personal investments in Energy Transfer Partners and Phillips 66, which would be a stakeholder in the completed project.

Tara Houska, an Ojibway attorney working with Honor the Earth, told Democracy Now on December 5, “It’s really incumbent on us to remain vigilant, to recognize the power that’s within us of organizing and coming together… in support of the water and the future generations.”

The Standing Rock water protectors have withstood frigid weather and blizzards in unheated tents and tipis. They have withstood the brutality of dog attacks, of water cannons in sub-freezing temperatures, of rubber bullets and tear gas. Twenty-one-year-old activist Sophia Wilansky risks amputation of her arm after being hit by what witnesses claim was a concussion grenade. Red Fawn Fallis is in prison, facing a trumped-up federal charge. More than 500 others have been arrested. 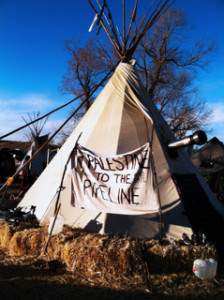 Tribal chairman Dave Archambault II told water protectors on December 5 that “It’s time to go home… and spend this winter with your families.” Not all are following his call.

From Palestinians to Peruvians, people from as many as 30 countries and 300 indigenous nations have traveled to North Dakota to stand against the pipeline.

The Standing Rock occupation has captured national moral imagination and riveted international attention in a unique way. The public sympathy is due to the urgency of the tribe’s call to protect the riches of nature in its territories – regardless of their having been stolen under US law – and the water protectors’ tenacity over many months.

The Standing Rock movement has quickly grown as a national symbol of, and call to action for, Native power and sovereignty; the rights of Mother Earth, especially water; and opposition to government impunity and corporate supremacy. 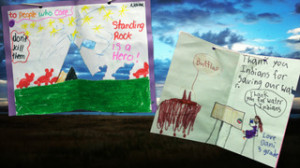 Two among hundreds of cards made for the tribe by local grammar-school children.

Henrietta Gomez, a self-identified Taos Pueblo grandmother, said, “We Indians have never had solidarity like this before.”

Similar responses to growing pillaging and extraction are underway around the globe, where indigenous and other land-based movements are defending their own lands, waters, forests, minerals, life forms, knowledge (otherwise known as intellectual property rights), and more. 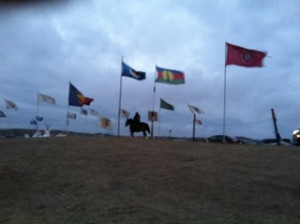 A lone rider at dusk between flags of Native nations.

The Standing Rock Sioux have the right to free, prior, and informed consent – guaranteed by the UN Declaration of the Rights of Indigenous Peoples to which the US is signatory – before any development can take place on their lands. In 22 countries, Convention 169 of the UN International Labor Organization provides the same protection f     or indigenous peoples, though it is almost invariably violated. Many indigenous movements are pressing hard for their rights under the convention. The US government has refused to sign onto Convention 169.

Stand with Standing Rock. December is Global Month of #NoDAPL Action. Call banks which have invested in DAPL and urge them to pull their funds. Almost $18 million have already been divested from the project. Look for more ways to lend support here. 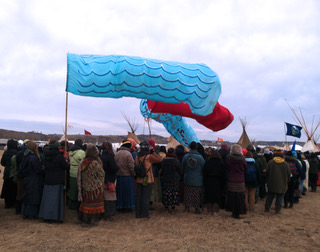