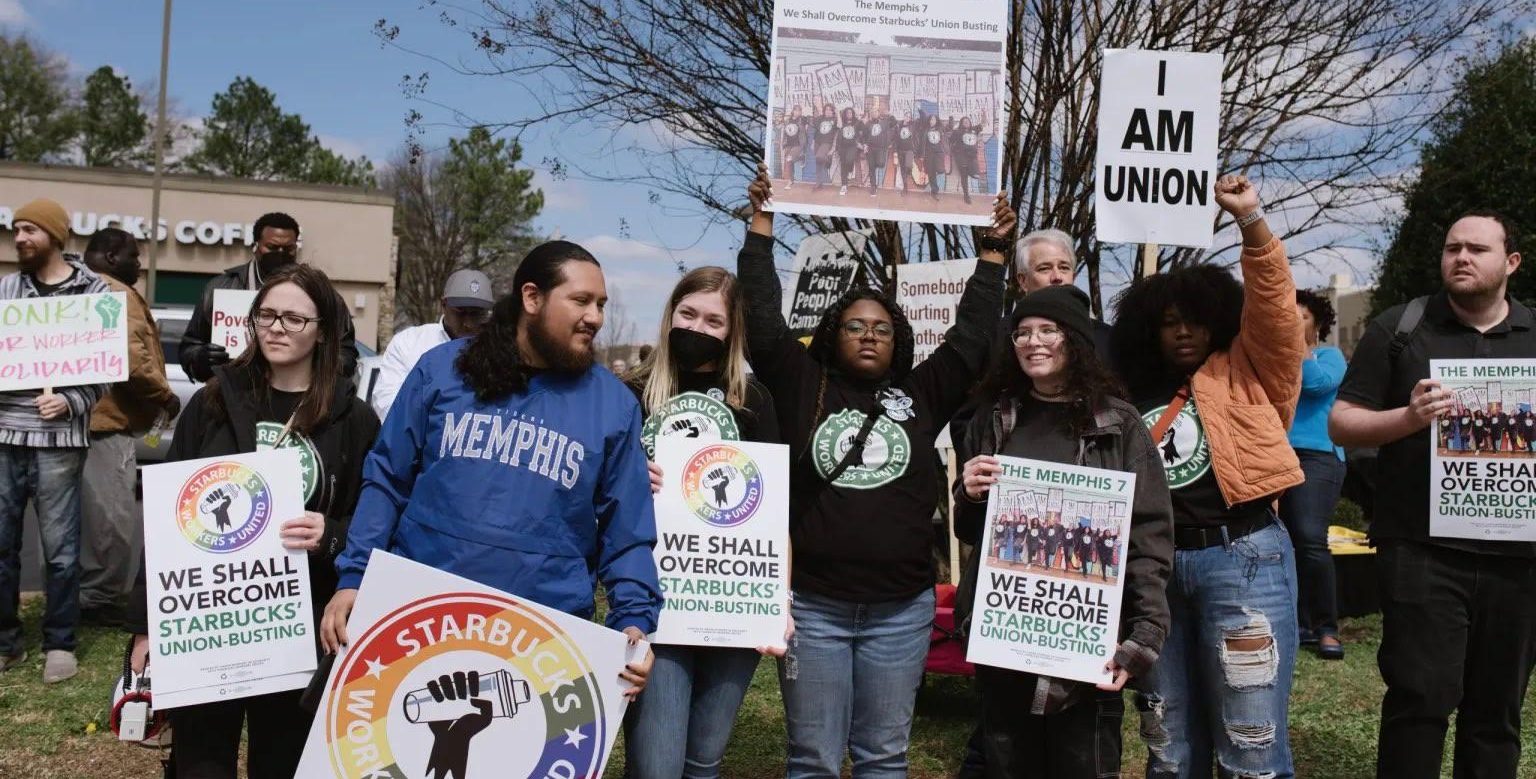 Above photo: Memphis Seven in front of the Poplar and Highland store they were fired from, during Poor People’s Campaign stop in Memphis May 23.

Recently, Starbucks workers achieved some significant wins in the form of National Labor Relations Board complaints and judgments against the company. Workers are waiting to see if these will materialize into meaningful changes in what is now a year-long, union-busting campaign waged by the company.

The NLRB filed a complaint Aug. 24 over Starbucks’ illegal withholding of pay raises and other benefits from workers who were unionized or in the process of organizing.

Since the beginning of the union drive, Starbucks has been announcing a number of perks for workers who decide not to unionize, including a pay raise which took effect Aug. 1. Starbucks CEO Howard Schultz claims that the company cannot legally offer these same wages and benefits to unionized workers, because these are terms of employment subject to bargaining at union stores.

In fact, Starbucks has stalled bargaining at the vast majority of the 220+ stores that voted for Starbucks Workers United!

Schultz is distorting the truth. Stores that are unionized clearly have a right to bargain over their employment terms; however, the right to bargain does not equate to an automatic denial of these new terms before bargaining has even started. It just means workers will have a say in whether or not new terms are adopted. Obviously, the workers would most likely favor raises and other benefits, which would not be something the union would try to block.

It would be one thing if the company tried to make changes and the union refused them and insisted on an alternative; but in this case, the increased benefits were never extended to union workers to begin with.

These discriminatory raises and perks are clearly a bribe by the company to curb the ever-growing interest in organizing.

The NLRB has ordered Starbucks to give the benefits to the workers who were denied them — including back pay, corporatewide training for managers and supervisors on federal labor rights and a letter of apology and video from Howard Schultz directly addressing the workers.

In addition to this NLRB complaint, workers are awaiting the result of a federal judge’s Aug. 18 order for Starbucks to rehire the Memphis Seven, the fired organizing committee at a store in Memphis, Tennessee. Initially, the judge ruled the firing was illegal and mandated the workers’ jobs be offered back with the same rate of pay and scheduled hours as before, giving the company five days to follow the order. Starbucks has since appealed the decision — which was also a racist attack on Black and Brown workers — dragging the case out past the five-day deadline.

Starbucks has now been given more time to plead its case. The company is arguing that it would be “unfair to the other workers” to rehire the Memphis Seven, claiming that those who currently work at the store don’t want them rehired and that they would have to give up hours to accommodate them. Workers at the store responded by drafting a statement in support of rehiring the Memphis Seven, saying that the fired workers are an “asset, not a hindrance” to the store.

It is laughable that Starbucks would speak on behalf of these workers and claim to be concerned about cutting workers’ hours in Memphis, when all around the country workers have been having their hours slashed in retaliation for union activity. Some workers believe that Starbucks has intentionally overstaffed this store, simply to make hours scarce and focus the blame on the Memphis Seven.

Workers World spoke to Nabretta Hardin, one of the fired Memphis organizers, who explained that even though headlines are claiming victory for the Memphis Seven, the battle is far from over. “We aren’t done yet. We still have over ten ULPs [Unfair Labor Practices] to fight for, and we have to rejuvenate the union movement in our city. We’re nowhere close to being done — we have a lot of things to rectify. We haven’t won a contract yet. We haven’t even been contacted for bargaining, and we won our election in June. We are still out here fighting, full force.”

With more than 85 fired Starbucks workers across the country, the case for the Memphis Seven remains at the center of the fight. Workers are still fighting, still organizing and still winning. With more than 220+ stores winning union elections and an over 80% success rate in votes, the campaign has proven to be not just a short-lived trend, but a militant movement that’s here to stay.

Arjae Red is a Starbucks worker in Buffalo, New York, a member of the SBWU.