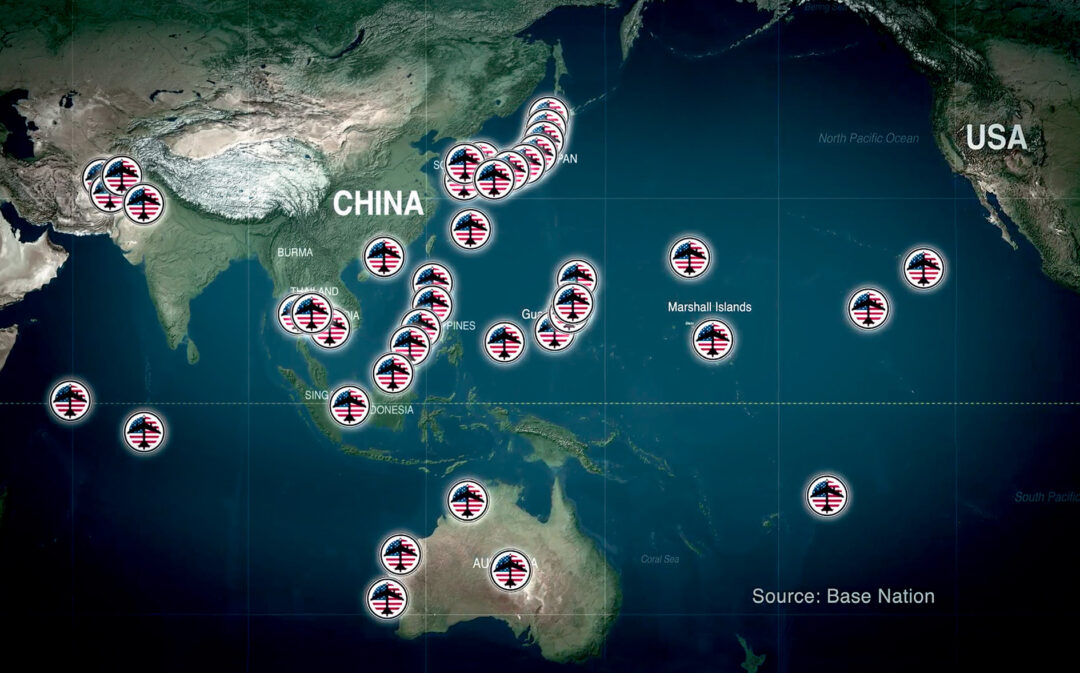 Above Photo: As this map illustrates, U.S. imperialism menaces China with over 400 military bases.

The following statement has been initiated by Friends of Socialist China. You can add your name as an individual signatory using the form at socialistchina.org. Once you do so, your name will appear on this page within a few hours. Organizations wishing to sign on to this statement should contact Friends of Socialist China at info@socialistchina.org.

We strongly condemn the publication by the Office of the High Commissioner for Human Rights of its Assessment of human rights concerns in the Xinjiang Uyghur Autonomous Region, People’s Republic of China. In the words of former OHCHR lawyer and human rights expert Alfred de Zayas, this document “should be discarded as propagandistic, biased and methodologically flawed.”

Based on substandard research methods and biased sources, the Assessment is completely lacking in credibility. It treats arms of the military-industrial complex, such as the Australian Strategic Policy Institute (ASPI), along with professional anti-communists such as Adrian Zenz, as legitimate sources. Meanwhile the voices of Chinese NGOs, academics and individuals are suppressed, as are the numerous reports of diplomatic trips to Xinjiang — including by representatives of Muslim-majority countries — that have taken place in recent years.

The Assessment pointedly ignores China’s extraordinary progress in promoting the human rights of all ethnic groups in Xinjiang: in relation to poverty alleviation, social welfare, economic development, safety from terrorist attacks, and more. Instead, the document uses deliberately ambiguous language — that China’s actions “may” constitute crimes against humanity — in order to slander the People’s Republic of China whilst maintaining some plausible deniability.

It is highly suspicious that the Assessment makes no mention of then-U.N. Human Rights Commissioner Michelle Bachelet’s visit to Xinjiang in May 2022. Having visited a prison and spoken to former trainees at a vocational education and training center; having interacted with civil society organizations, academics, and community and religious leaders; Bachelet found no evidence of crimes against humanity. The numerous conversations she had do not form part of the data set for the Assessment.

What is the reason for the disparity between the OHCHR report and Bachelet’s end-of-mission statement? It is painfully obvious that the OHCHR has come under intense pressure from the U.S. to bolster the credibility of the lurid slanders that have been thrown at China by Western politicians and journalists. Such propaganda forms part of the West’s imperial agenda of undermining China.

The OHCHR Assessment does a profound disservice to the cause of strengthening global human rights cooperation. The report does not enjoy a mandate from the General Assembly or the Human Rights Council, and it runs counter to the wishes and interests of the mainstream of the international community. A joint statement delivered by Cuba at the 50th session of the Human Rights Council in June this year stated its firm opposition to the “politicization of human rights and double standards, or interference in China’s internal affairs under the pretext of human rights.” This statement was signed by 69 countries, the overwhelming majority from the Global South.

Given the OHCHR’s relative silence in relation to persistent human rights abuses by the imperialist powers, it is impossible to avoid the conclusion that the Assessment is politically motivated, produced under pressure from the U.S. and designed to contribute to a dangerous, escalating new Cold War.

We call on the OHCHR to withdraw its Assessment, and we stand in solidarity with the people of China, subjected to abhorrent and baseless accusations.