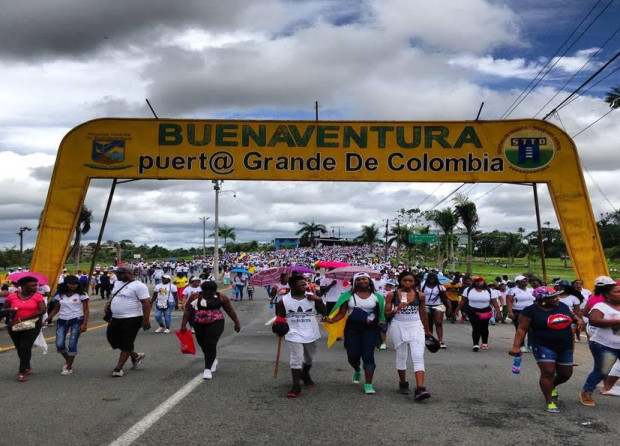 Statement Of Support For Civic Strike In Buenaventura, Colombia

Statement of Support and Solidarity with the People of Buenaventura

Popular Resistance has been closely following and reporting on the civic strike in the port city of Buenaventura, Colombia. As the strike is suspended we are issuing this statement of support and solidarity.

We applaud the political clarity and the uncompromising demands of the people of Buenaventura in response to the long-term prejudice and mistreatment of Afro-Colombians. The organization that the civic strike showed, especially in the face of harsh treatment by the security state in Colombia, demonstrated great strength and courage which made the strike successful.

Your effort has brought massive attention to the indifference of the Colombian government to centuries of racism that have led to abject poverty and mistreatment of black people in Colombia. The agreement that led to the suspension of the strike is a clear victory for Afro-Colombians in Buenaventura. The agreement includes four components:

1. The creation of a special autonomous fund with resources that are considered patrimony of the people in Buenaventura, coming from 50% of the taxes from the business and companies that profit from activities related to the port, plus $76 million dollars that the government will raise from credits with international banks, regulated by a law that should be signed in a month.

2. An initial investment of COP$1.500 billions to address the immediate needs for basic infrastructure for water, health and sanitation services in rural and urban areas.

3. An integrated development plan for the city that includes certain institutional reforms and effective community participation with objectives to make Buenaventura a port for the people and not simply for profit.

4. The proper investigations and penalization for the abuses and human rights violations committed by state forces, guarantees for those who have been criminalized and ensuring security and protection for the many leaders that guided the 22 days of peaceful, organized and successful struggle.

You have demanded and won human rights for the people of Buenaventura. This is a major victory.

You have shown that the people of Buenaventura and their supporters in Colombia and around the world are strong enough to ensure that this agreement is enforced. We remain in unconditional solidarity with your struggle, which is ongoing, despite the suspension of the strike.

Popular Resistance condemns the violent repression and violations of law that were committed by the state forces. Colombian authorities need to conduct a proper investigation and penalization of the ESMAD security forces. The ESMAD committed serious violations of human rights and humanitarian provision, abusing its responsibility to provide security and instead creating a war-like situation against unarmed civilians, particularly in neighborhoods at night when people were sleeping. Reports from the Strike’s human rights committee counted 209 children severely affected by tear gas, and still counting.

President Juan Manuel Santos, the Nobel Peace Prize Winner, could have controlled the ESMAD violence but failed to do so. He did not live up to his role as the head of a peace-building process in Colombia. We, and people around the word, will be watching and reporting on the actions he takes or fails to take in the wake of these human rights violations.

This historic victory is not the end. We must all not only continue our solidarity to ensure these agreements are put in place but also build a broader movement for liberation and self-determination of black and other oppressed people. We must also be prepared for retribution from the ESMAD and paramilitary forces. The struggle for self-determination and human rights for the people of Buenaventura continues and is part of the global struggle against oppression, racism and for the development of new societies where the people’s necessities and views come first.