Above Photo: Stephen Hawking said the crisis in the NHS has been caused by political decisions. Photograph: Dave J Hogan/Getty Images

Stephen Hawking has accused ministers of damaging the NHS, blaming the Conservatives in a passionate and sustained attack for slashing funding, weakening the health service though privatisation, demoralising staff by curbing pay and cutting social care support.

The renowned 75-year-old physicist was speaking to promote an address he will give on Saturday outlining how he owes his long life and achievements to the NHS care he received, and setting out his fears for a service he believes is being turned into “a US-style insurance system”.

The author of A Brief History of Time did not name any minister or political party in his general complaint, but he blamed a raft of policies pursued since 2010 by the coalition and then the Conservatives for enfeebling the NHS and leaving it unable to cope with the demands being placed on it.

“The crisis in the NHS has been caused by political decisions,” he said. “The political decisions include underfunding and cuts, privatising services, the public sector pay cap, the new contract imposed on the junior doctors and removal of the student nurses’ bursary.

“Failures in the system of privatised social care for disabled and elderly people has also placed additional burden on the NHS.”

Hawking was diagnosed with motor neurone disease at the age of 21, a story told in the film The Theory of Everything, and has increasingly relied on the NHS as his condition has deteriorated. 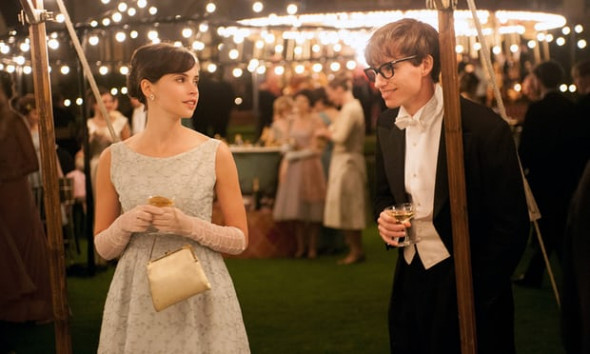 Felicity Jones and Eddie Redmayne star in The Theory of Everything. Photograph: Working Title Films/Allstar

His speech at the Royal Society of Medicine will single out Jeremy Hunt, the health secretary, who claimed that 11,000 patients a year died because of understaffing of hospitals at weekends. Hawking will say that four of the eight studies cited by Hunt were not peer reviewed and that he ignored 13 papers which contradicted his statements.

“Speaking as a scientist, cherry picking evidence is unacceptable,” he will say. “When public figures abuse scientific argument, citing some studies but suppressing others, to justify policies that they want to implement for other reasons, it debases scientific culture.

“One consequence of this sort of behaviour is that it leads ordinary people not to trust science, at a time when scientific research and progress are more important than ever, given the challenges we face as a human race.”

Criticising NHS privatisation, Hawking will say that the £2.9bn spent every year by hospitals in England on temporary personnel to alleviate chronic understaffing has enriched private employment firms while denying the NHS vital funding.

“The huge increase in the use of private agency staff, for example, inevitably means that money is extracted from the system as profit for the agency, and increases costs for the whole country.”

Hawking will says he fears that private firms have gained such a large role in treating NHS patients they are now undermining its founding principles and opening the door to the Americanisation of care.

“We must prevent the establishment of a two-tier service, with the best medicine for the wealthy and an inferior service for the rest. International comparisons indicate that the most efficient way to provide good healthcare is for services to be publicly funded and publicly run.

Politicians need to defend the NHS and the public be encouraged to take a stand, he will say. 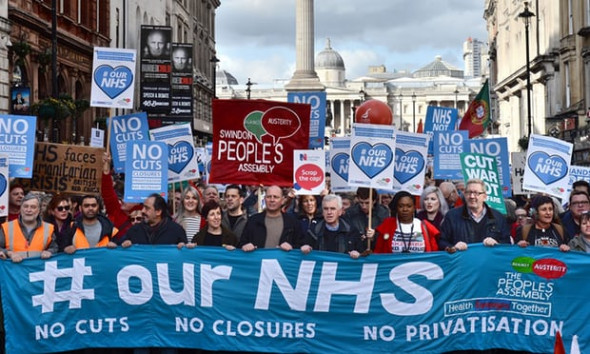 There have been a number of protests over cuts to the NHS in recent years. Photograph: Victoria Jones/PA

He rejects claims that the spiralling costs of treating an ageing and growing population, coupled with tight government finances, mean the NHS, which will receive £149.2bn of public funding across the UK this year, has become too expensive to continue in its present form. That idea has sparked inquiries by select committees of both houses of parliament, thinktanks and medical bodies.

“When politicians and private healthcare industry lobbyists claim that we cannot afford the NHS, this is the exact inversion of the truth. We cannot afford not to have the NHS”, he will declare.

Hawking, who is acclaimed for his work on black holes in space, works at Cambridge University as director of research at the centre for theoretical cosmology.

He will recount how staff at Addenbrooke’s hospital in Cambridge saved his life in 1985 when, suffering from pneumonia related to problems with his larynx, he was airlifted there from Switzerland where doctors had said they could not save him and that his ventilator should be turned off.

He will also tell of undergoing a risky but ultimately life-saving procedure to remove his larynx in 1999, under the surgeon David Howard at a London specialist hospital. “I have had a lot of experience of the NHS, and the care I received has enabled me to live my life as I want and to contribute to major advances in our understanding of the universe.”

Prof Sir Simon Wessely, the RSM’s president, said: “Prof Stephen Hawking’s reputation goes before him, so when a man of his extraordinary intellect but also with his equally extraordinary experience of illness, talks about the NHS and its values, we must all pay close attention.”

Responding to Hawking’s criticisms on variation in care across the week, Hunt tweeted on Friday night:

The government defended its record on the NHS and pointed to the Commonwealth Fund thinktank’s recent verdict that the service is the best out of 11 rich countries’ health systems. “This government is fully committed to a world-class NHS free at the point of use, now and in the future. That’s why we’re backing it with an extra £8bn of investment over the next five years,” a Department of Health spokeswoman said.

“Today, there are almost 11,800 more doctors and over 12,500 more nurses on our wards than there were in 2010 and the NHS is seeing 1,800 more A&E patients within the four-hour standard every single day. Despite being busy, the NHS has been ranked as the best, safest and most affordable healthcare system out of 11 wealthy nations, as analysed by the Commonwealth Fund.”