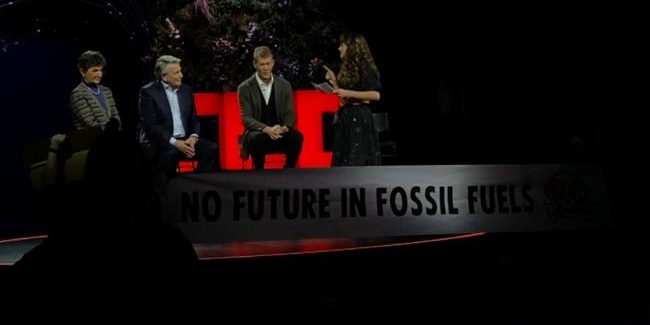 Youth activists disrupted a TED panel in Edinburgh with the CEO of Shell dubbing him “one of the most evil people in the world”.

Environmental campaigners took over the stage at the TED Countdown conference in Edinburgh which was hosting a panel discussion with Royal Dutch Shell CEO, Ben van Beurden.

The activists say they raised concerns with TED Countdown organisers that a fossil fuel company, like Shell, has no place speaking at an event that positions itself as a “global initiative to champion and accelerate solutions to the climate crisis”.

Despite calls from activists to remove van Beurden from the panel, he was allowed to retain his speaking slot on the main stage.

One young activist, only named as Lauren, was invited onto the stage and used the opportunity to criticise Shell and Siccar Point Energy for steaming ahead with the Cambo oil field during the climate crisis.

Video footage seen by The National shows Lauren telling van Beurden that he should be “absolutely ashamed” at the devastation the oil giant has caused to communities around the world, stating they are responsible for “so much death and suffering”.

Accusing Shell of being one of the main drivers of the climate crisis, Lauren asked why Shell is appealing the recent court ruling by Dutch authorities that Shell must decrease its emissions by 2030.

Van Beurden did not give a straight answer to the question, to which Lauren said: “I hope that you know that we will never forget what you have done and what Shell has done.

“I hope you know that as the climate crisis gets more and more deadly, you will be to blame. And I will not be sharing this platform with you anymore.”

Protestors holding large white banners which read “No future in fossil fuels” then took over the front of the stage while Lauren removed her microphone and left.

BREAKING 🔥 activists reclaim the #TEDcountdown stage from Shell’s CEO.@Shell is actively pursuing new oil & gas projects. They are the problem, not the solution.

It comes as Edinburgh locals held a protest against plans to plough ahead with the Cambo oil field, outside of the Edinburgh International Conference Centre at the same time.

Francesca, a Stop Cambo campaigner, said: “It is clear Shell has no real commitment to reducing its emissions, and allowing them a platform at TED Countdown is nothing more than another opportunity for greenwashing the fossil fuel industry.”

Daze, Climate Justice activist and creative cirector, said: “My family is from the Niger Delta, and I know the harm Shell has caused and continues to cause by pushing us closer and closer to climate devastation.

“This action is the youth saying enough is enough, asking the hard questions and demanding answers.

“We need Shell to commit to stopping the future harm caused by projects like the Cambo oil field, but also addressing the past harm like the murder of Indigenous activists. Without this, Shell is not part of the future we need.”

Bryce, a Scottish activist and organiser, said: “Where I live in Mossmorran we are directly suffering from the effects of Shell’s pollution. Now we are allowing the man responsible for contaminating the air in my hometown the privilege of sitting in an air-conditioned hall, and talking about the future.”