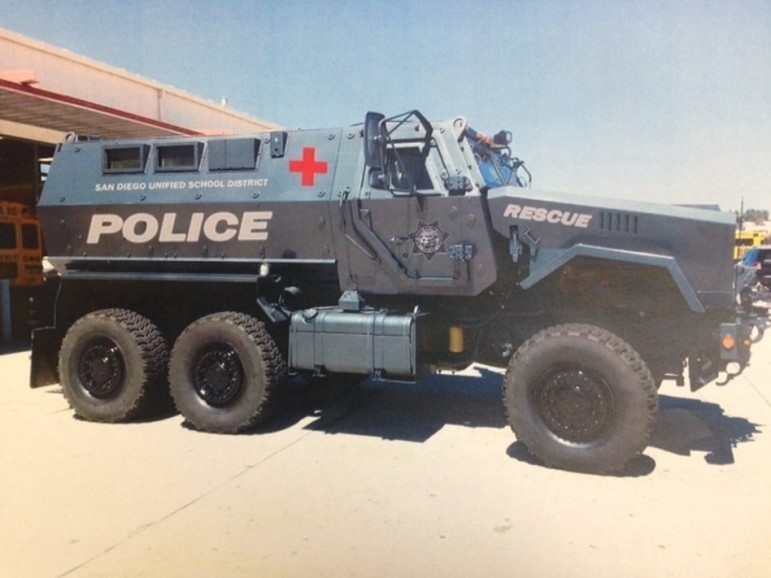 The 2013 Caiman MRAP acquired by the San Diego Unified School District Police Department, rendered by the district as it would appear after its original tan color is painted over.

News reports and lists of recipients of surplus hardware reveal that assault-style rifles, armored vehicles and other military supplies have been handed over to school districts large and small, from California, Texas, Nevada and Utah to Florida, Georgia, Kansas and Michigan.

In California, the San Diego Unified School District acquired an 18-ton Mine-Resistant Ambush Protected vehicle, called a MRAP, through the DOD’s 1033 program to transfer surplus supplies to civilian law enforcement. In June, the Los Angeles Unified School District also received a MRAP, which was designed to protect U.S. troops under attack in Iraq.

Over time, the L.A. school police also have received 61 M-16 rifles and three grenade launchers that have never been used.

“Adding the presence of military-grade weapons to school climates that have become increasingly hostile due to their over-reliance on police to handle routine student discipline can only exacerbate existing tensions,” said the protest letter, signed by the NAACP’s Legal Defense and Education Fund and public-interest law groups Texas Appleseed of Austin, Texas, and Public Counsel, which is based in Los Angeles.

Controversy over so-called militarization of school police comes just as the L.A. district is enacting policies that limit ticketing of students for minor infractions and curb the controversial use of officers in school discipline, as the Center for Public Integrity has reported.

Both Texas Appleseed and Public Counsel have been active in pushing for states and district to reform policies regarding how school police are deployed on campuses.

Other signatories to the letter objecting to military hardware for school police include the Children’s Law Center, the Education Law Center, the National Center for Youth Law, the Advancement Project — also active in urging school police reforms — and the L.A.-based Labor-Community Strategy Center.

Scrutiny of transfers of military supplies from the DOD’s Defense Logistics Agency erupted following revelations that many city police departments have been accumulating military hardware designed primarily for war.

Among the cities that obtained military equipment for free, or just for delivery costs, was Ferguson, Missouri, where local police rolled out armored vehicles and officers in combat-like gear to respond to protests in August over an officers’ fatal shooting of unarmed black teenager Michael Brown.

President Obama in August ordered a review of the 1033 program. The Defense Logistics Agency did not respond immediately to a request for a comment on the letter regarding school police. But on Sept. 9, a Defense Department official addressed the 1033 program’ s provision of hardware to law enforcement in general during a hearing before the Senate Committee on Homeland Security and Governmental Affairs.

Each state has a 1033 program state coordinator who is appointed by the state’s governor and who approves law enforcement agencies that apply to participate in the program. The state coordinator also screens and approves requests those agencies make for material listed in catalogues, explained Alan Estevez, principal deputy undersecretary of defense for acquisition, logistics and technology.

“It is worth noting that we are not ‘pushing’ equipment on any police force,” Estevez said. He said the Defense Logistics Agency conducts a basic review of requests based on size of a department. For example, he said, a law enforcement department of 10 officers would not receive 20 M-16 rifles.

The letter objecting to the program noted that 10 Texas school districts, the most reported in one state so far, have been receiving DOD hardware.

Texas’ Edinburg Consolidated Independent School District, which has 33,500 students, has outfitted its own SWAT team with these supplies, the letter said.

Deborah Fowler, deputy director of Texas Appleseed, said militarization of police runs contrary to efforts to prevent excessive use of force against students.

“Military grade weapons have no place on our public school campuses,” Fowler said. “We have already seen the way that much more common weapons — like Tasers and pepper spray — can be misused in school settings, and know that excessive use of force in schools is often targeted at young people of color and students with disabilities.”

In Aledo, Texas, the town’s school police — in a district of 5,000 students — have decided to return five U.S. military rifles officers obtained from the 1033 program, according to a recent report in the Fort Worth Star Telegram.  The department has seven full-time officers and 11 reserve officers.

In Los Angeles, Manuel Criollo, an organizer with the Labor-Community Strategy Center, called on the L.A. school district to return the military hardware. “The intersection of criminalization and militarization in our schools should be rejected,” said Criollo, who helped draft the L.A. school police policies.

L.A. school police chief Steve Zimmerman said the MRAP was obtained as a way to transport school children in the event of a large-scale attack, according to the Los Angeles Daily News.

The chief is now evaluating whether the vehicle and grenade launchers are necessary, the newspaper said. The school police have an agreement with city police and county sheriff’s deputies to provide support in the event of civil unrest, according to Zimmerman, and the grenade launchers were to be outfitted to fire rubber bullets.