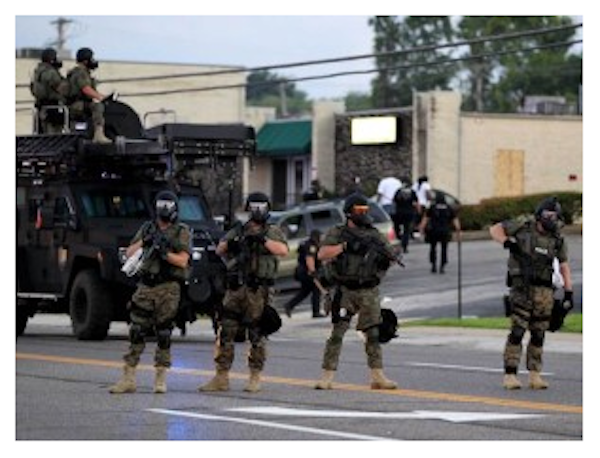 Representative Henry “Hank” Johnson will introduce a bill to restrict the flow of surplus war equipment from the Department of Defense to local police departments. He has sent this letter to his colleagues asking for co-sponsors.

Take action: Send an email to your Rep. asking them to co-sponsor this bill.

Does Your Town Police Department Need free MRAP’s and M16’s To Do Its Job?

Our main streets should be a place for business, families, and relaxation, not tanks and M16s.  Unfortunately, due to a Department of Defense (DOD) Program that transfers surplus DOD equipment to state and local law enforcement; our local police are quickly beginning to resemble paramilitary forces.  Please join me in supporting the “Stop Militarizing Law Enforcement Act” before this problem gets any worse.  This bill will end the free transfers of certain aggressive military equipment to local law enforcement and ensure that all equipment can be accounted for.

Recently, a North Carolina town of roughly 16,000 people, acquired some Humvees and Mine-Resistant, Ambush-Protected vehicles (or MRAPs), which it proudly displayed at a recent car show. Roanoke Rapids got them freefrom the Pentagon, returned from our wars in Iraq and Afghanistan.  Next door, in South Carolina, the Columbia Police Department also received a free MRAP from the Pentagon, which otherwise would have cost Columbia nearly $700,000.

We should be concerned that we are giving away unprecedented amounts of military equipment and creating incentives for local police to use it in order to conduct ordinary law enforcement activities. That is why I will soon introduce “Stop Militarizing Law Enforcement Act” to reform the program.  My bill will do two things.

Seem like a lot? It is. And that’s only in the last few months. This trend is not only sweeping America’s small cities, it’s hitting American college campuses as well. Ohio State University recently acquired an MRAP. Apparently, college kids are getting too rowdy.

In 2012, an Arizona Sheriff was accused of distributing Humvees, fire trucks, medical equipment and other suppliesin violation of the programs rules.  If we are going to give military equipment away for free, surely we must ensure that local police organizations are using the equipment properly and can account for this equipment?

Before another small town’s police force gets a $700,000 gift from the Defense Department that it can’t maintain or manage, it behooves us to reign in the Pentagon’s 1033 program and revisit the merits of a militarized America. I hope we can work together on this important issue.  If you have any questions about the bill or the program, please contact Scott Goldstein at 5-1605 or scott.goldstein@mail.house.gov.