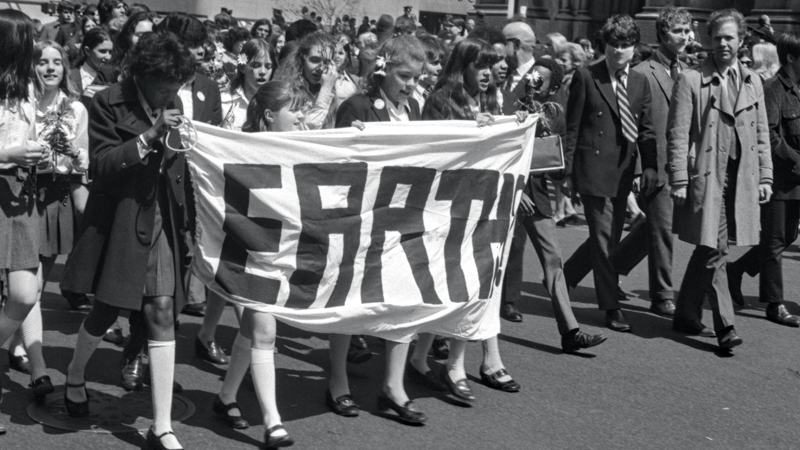 Stop Reversals Of The Long-term Benefits Of The First Earth Day April 22, 1970

NOTE: The major changes that Ralph Nader highlights came about because of a mass movement and critical alliance between labor unions and environmentalists. The Earth Day events were a manifestation of the organizing that was behind those movements.  – MF

Senator Gaylord Nelson launched Earth Day, having tired of Congressional inaction and the power of the corporate pollution lobby. Earth Day quickly became a grassroots educational and action-driven week of activities that aroused the country.

Even reactionary President Nixon quickly planted a tree on the White House South lawn in recognition of the public support for environmentalism after he saw the huge turnouts at rallies and marches.

Imagine the environmental threats fifty years ago. Cities were choking with motor vehicle and factory pollution. Los Angeles was smog-land. Air pollution caused respiratory disease and stung your eyes. The Cuyahoga River near Cleveland, slick with oil, would catch on fire. Birmingham, Alabama’s steel mills turned the air into a brownish haze.

I spoke at several large rallies on the first Earth Day and during “Earth Week” alongside environmental leaders, including the great David Brower and dynamic Professor Barry Commoner. The energy at the gatherings made indentured politicians nervous. Eleven thousand schools, colleges, and universities hosted events focusing on local deadly poison hotspots and challenging state capitols and Congress.

Mass media coverage was spectacular. All the TV networks, the covers of Time and Newsweek (a big deal then) and the popular daytime TV talk shows (Phil Donahue, Merv Griffin, and Mike Douglas) – national and local media provided saturation coverage coast to coast.

There was a huge rally on the Mall in Washington, DC, which was very visible to a wary Nixon in the White House and lawmakers in Congress. Hearing the rumble of the people supported by scientists and health specialists, Nixon and members of Congress knew they had to enact environmental protections.

Within three years Congress produced sweeping, unsurpassed, landmark laws such as the Clean Air Act, Clean Water Act, and the Endangered Species Act. New laws also created the EPA, OSHA, and the White House Council on Environmental Quality. New environmental groups (Greenpeace, Public Citizen, Friends of the Earth, NRDC, and EDF) joined the earlier organizations such as the Sierra Club to strengthen the civic bedrock for environmental advocacy and watchdogging.

Out of Earth Day came many of the young authors, filmmakers, and leaders of the next half-century of environmental action. They included Denis Hayes, lead coordinator of Earth Day 1970, David Zwick of Clean Water Action, Professor Paul Erlich, Selma Rubin, and Dr. Brent Blackwelder. Later the environmental justice movement stressed that poor communities are exposed to the most lethal dumping grounds and deadly emissions.

Although constantly obstructed by corporate polluters, the air and water did become cleaner. There is far less lead in most, not all human bodies (note Flint, Michigan), and far less asbestos in your lungs. Both substances are banned from most consumer product uses.

Adam Rome, a University of Buffalo environmental historian, documented what happened on and after the first Earth Day in his book The Genius of Earth Day. He said the intensity of local organizers is largely missing from climate and environmental activism today.

Anybody doubting this observation should take note of how dangerous Donald and a supine Congress are failing to protect our environment. Trump is viciously unraveling the established protections to flood your families with more mercury, soot, coal ash, cancerous pesticides, dirtier drinking water and toxic workplaces. What Trump calls “deregulation” is increasing death, disease, and property damage in America by taking the federal cops off the corporate poison beat.

Dumb, disgraceful Donald still sneers at the oncoming climate catastrophe, calling it a hoax. His arrogant ignorance is scuttling federal programs and scientific research on climate, destroying restrictions on greenhouse gases produced by the fossil fuel giants, and inviting them to further exploit federal wilderness lands and offshore areas. Despite the massive oil flooding of the Gulf by B.P Oil company 10 years ago, disgraceful Trump is loosening restrictions on drillers imposed after the Deep Water Horizon disaster. The consequences for the fishing and tourist industry once again could be devastating.

The omnicidal Republicans’ controlling the Senate support Trump’s reckless agenda regardless of the environmental harm done to their own families. The Democrats, controlling the House complain about gridlock. Unfortunately, with few exceptions, they are not racing to again impeach Trump, or demand his resignation, if only to rid the nation of his chaotic scapegoating, and the ego-maniacal, self-contradicting, colossal mismanagement regarding the corona-virus crisis. It is time to stop the further preventable loss of life caused by Trump’s fibbing, flailing and daily failures to process reliable information and lead.

Trump’s resignation should be the grassroots focus of today’s Earth Day and become every day’s popular demand for the sake of American lives and health.