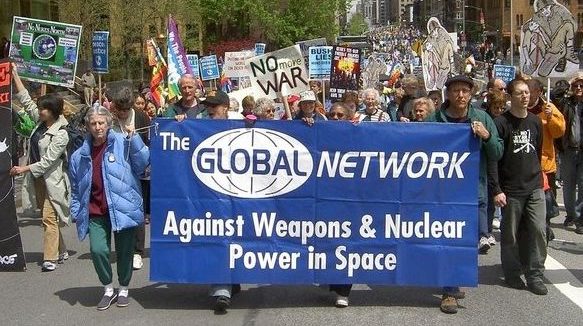 Stop The Pentagon Takeover Of Space

The Global Network Against Weapons & Nuclear Power in Space (GN) will hold its 26th annual space organizing conference from June 22-24, 2018 in Oxford, England. The event will also include a protest at the major US/NATO military space communications and control centre at nearby Croughton Air Force Base.

Outer space is being taken over by the worlds military. In particular, the US Space Command’s “Vision for 2020” describes the goal of “Full Spectrum Dominance”: military superiority on land, at sea, in the air, in space and of all information. To achieve this end the Pentagon has launched hundreds of satellites which they use for surveillance; communication; global positioning; missile targeting and guidance; drone operations; and so-called ‘missile defence’ all of which are important components of war fighting. In addition, space-based weapons of various types are now being developed. These are all supported by a worldwide network of ground-based stations, many of which are also being used for electronic spying, hacking and cyber warfare, and some of which are situated in the UK. (Menwith Hill, Fylingdales and Croughton)

Dave Webb, National Chair of the Campaign for Nuclear Disarmament in the UK (and also board convener of the Global Network) said, “The growing world tensions over the Korean Peninsula, Iran and the Middle East and the growing number of military exercises by the US and NATO in Europe and Scandinavia are all being monitored and managed through space technology and yet most people are unaware of this. The GN conference in Oxford will discuss these growing concerns, share information from those involved in the international resistance and also highlight the role of Croughton.”

Each year the Global Network holds its space organizing conference in a different part of the world.  Last year the GN met in Huntsville, Alabama – the home of the Army’s Redstone Arsenal and the directorate of the ‘missile defense’ program.

Full conference details are available at the GN website http://www.space4peace.org/actions/gnconf_2018.htm