Stop The TPP: ‘Not A Done Deal’

Above photo: Protesters at the hotel where TPP negotiations took place in Atlanta, GA.

After five years of secret talks, the twelve countries involved in the TransPacific Partnership (TPP) negotiations announced they have reached an agreement. The deal was written by corrupt trade ministers and hundreds of corporate lobbyists without public (or even US Congressional) input. It is much more than a trade deal– only 5 of the 29 chapters even deal with trade. The rest of the deal is about privatizing government programs and services for corporate profits, removing government regulations, and setting protections for multinational corporations and investors rather than the health of the planet or necessities of people.

The TPP has supposedly been agreed upon (the trade ministers’ announcement was vagur), but it has not been signed yet and there are still many steps before it becomes law. It is now up to us to stop it. Many actions are being planned.

This final round of negotiations in Atlanta was delayed by protests and US bullying on key issues like patent protection for life-saving medicines, auto-manufacturing, and dairy, but eventually the ministers came up with a scandalous deal to protect the interests of their powerful industries. Groups like Doctors without Borders, Sierra Club, Public Citizen and United Steelworkers expressed their outrage at this TPP agreement while big corporate greens like World Wildlife Fund spit out Obama propaganda on the environment and animal rights that would be irreversibly harmed by TPP. 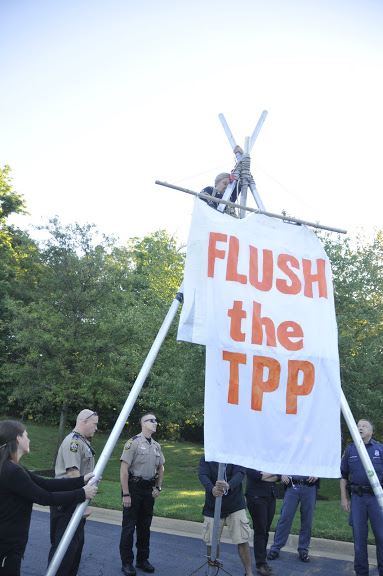 The TPP is not a done deal until it is signed by heads of each country and and their respective legislatures agree to it. In the United States, both the House and Senate will have to vote on the TPP after a 60-day period of review during which the public is supposed to have access to the text of the agreement. More on the US politics here.

In the United States we have a choice to make: stay passive and let TPP slip through Congress under Fast Track OR rise to the historic occasion to challenge global corporate rule.

Actions are already being planned: This November 14-18 people from across the country will converge on Washington DC for mass action to stop TPP and other corporate “trade” deals. Sign up here and invite all of your friends to the Facebook event.

Leading up to November, there is an international week of action from October 10-17. Congress will be in district so plan your actions now and submit them to the action map!

To get involved, join the weekly TPP Resistance Calls, every Wednesday evening.

We have a real chance of stopping the TPP, but only if we escalate our organizing and protests.

Why the New TPP Agreement is So Bad:

It is essential that members of Congress and the public fully understand the contents of the TransPacific Partnership and its impacts before it is voted upon. It is our job to educate and mobilize to stop the TPP.

Ralph Nader said the TPP is a “global corporate coup…its scope is everything…[it is] the most brazen corporate power grab in American history…[and] a major peril to our national authority.” Full interview here. 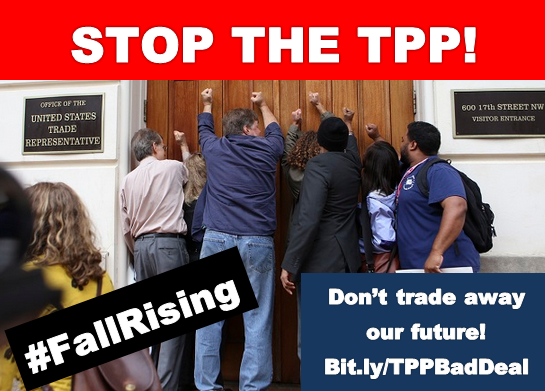 The TPP is a corporate power grab that impacts every aspect of people’s lives. If passed, it would take away environmental and food safety protections, increase US development of fracked gas and tar sands for export, lower wages and worker protections around the world, increase human trafficking, end what we have left of internet freedom, inhibit access to lifesaving medicine by extending patent rights to big pharmaceutical companies, spur further financial deregulation, increase land grabs of indigenous territory, and more.

The TPP would destroy the BDS movement, end buy-local and buy-America provisions, nullify any UN climate agreement, and set up rigged tribunals (that supersede even the US Supreme Court) for corporations to sue governments that pass laws or regulations that hurt their bottom line. Poor people, women, the lgbtq community, and people of color would be most impacted.

The US Trade Representative’s Office should not have the ability to create binding laws that harm the public in so many ways. In fact, it is illegal. As Dr. Margaret Flowers explains, the TPP, TTIP, and TiSA are treaties, not “trade agreements.” She says that “avoiding the designation of treaty means that Congress can avoid stricter requirements for oversight and passage and instead rush the agreements through Congress using a process called Fast Track.”

The TPP is about more than any of these “issues.” The TPP, along with two other treaties being negotiated, the Transatlantic Trade and Investment Partnership (TTIP) and the Trade in Services Agreement (TiSA), are essential tools of US empire and would be backed up by the US military. All three of these deals must be stopped so that we can begin to create the new world we so desperately need.

This is an historic moment. Will we cede to the most powerful corporations in the world or will we organize to stop the corporate coup? The choice is ours to make!