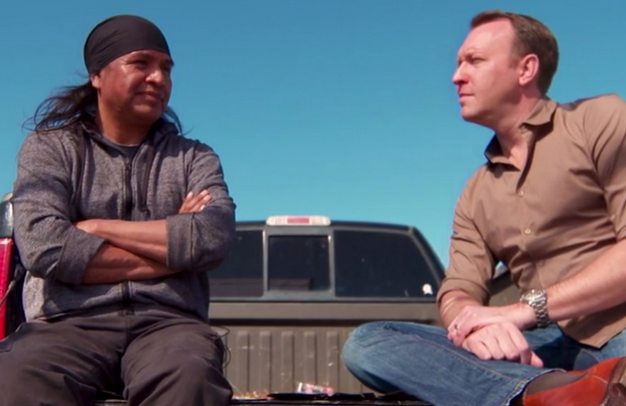 Why is Congress giving federally protected Arizona land sacred to the Apache to a massive mining conglomerate?

SUPERIOR, Ariz. – A place of great natural beauty, popular among rock climbers and campers, a part of Tonto National Forest known as Oak Flat has been under federal protection from mining since 1955, by special order of President Eisenhower.

On the nearby San Carlos Apache reservation, many consider Oak Flat to be sacred, ancestral land – the home of one of their gods and the site of traditional Apache ceremonies.

But Oak Flat also sits on top of one of the world’s largest deposits of copper ore. Resolution Copper Mining, a subsidiary of British-Australian mining conglomerate Rio Tinto, has sought ownership of the land for a decade, lobbying Congress to enact special legislation on its behalf more than a dozen times since 2005.

Year after year the bills failed to pass. But in December, the legislation was  was quietly passed into law as part of the 2015 National Defense Authorization Act. Arizona Sen. John McCain, who has long championed the deal, said the land exchange would “maintain the strength of the most technologically advanced military in the world” since copper is the second-most-utilized mineral by the Department of Defense.

As part of the deal, Resolution Copper will swap roughly 7.8 square miles of land scattered across Arizona for roughly 3.8 square miles of Tonto National Forest, which includes Oak Flat. The new legislation will open up Oak Flat for copper mining.

But critics say the move allows the company to privatize the land and make an end run around critical environmental and cultural protections. What’s more Resolution Copper can’t promise that any of the copper produced by the mine will remain in the United States – which raises the question: How does this help national defense?

Apache tribal council member Wendsler Nosie Sr. has been flying to Washington, D.C., to fight the land exchange for years. But this time, he said he could tell something was different. Tribal representatives were in the Capitol for the annual White House Tribal Conference when he heard the news.

“We got wind that there might be some movements happening in Washington,” he said. “It was a bad feeling because when I got there, you knew something was moving, where you were asking questions night and day but nobody was giving us a definite answer.”

Negotiated behind closed doors and with no public discussion, details of the land swap were first revealed shortly before midnight, the day before the 1,600-page defense bill was up for consideration in the House of Representatives. A day later, the bill passed the House.

For Nosie, the story was all too familiar. Historical records show that vast amounts of land once under Apache control were carved out of the reservation by the U.S. government to enable mining at the turn of the century. Private companies extracted a fortune in minerals with minimal benefit to the tribe.

“Look at all the mines here already,” Nosie said. “Look at all the things they took from us. Seventy percent unemployment, that already tells you where it’s going. It’s not going to benefit anybody here. What’s going to be left is contamination.”

Arizona is one of the most heavily mined states in the country and a major copper producer. The Government Accountability Office estimates that there are roughly 50,000 abandoned hard rock mining sites in the state, contributing to environmental problems such as contaminated water and soil.

The Apaches aren’t the only people who will be affected by a new mine. Framed by the striking Apache Leap Mountains, the tiny town of Superior is just a few miles west of the proposed mine site.

The town has weathered tough years since the last mine closed, with boarded-up buildings on Main Street, a dwindling population and millions of dollars of debt.

Steve Cooper is the town attorney and, surprisingly, he says the town officially withdrew its support for the land exchange almost two years ago.

“We are a community of miners. We want to mine. We would love to have a mine in the community,” said Cooper. “Our concern is basically this: We lost our mine in 1986. We have lived the consequences now for 30 years. It has a devastating effect on the community. Until you understand exactly what is going on and what the impact’s going to be on the community, you can’t make an agreement until all the facts are on the table.”

According to Cooper, the destruction of Oak Flat and dumping of mining byproducts will reduce the town’s appeal as a tourism destination. The Town Council wants the company to pay a mining tax, amounting to one-tenth of 1 percent of the value of the ore.

“When you look at the amount of money that they claim is out there in that ore body, and what they’re going to take, at the end of the day, it’s an issue of fairness,” Cooper said.

But the copper ore lies outside town limits and the company doesn’t need Superior’s blessing to proceed.

‘We need a boost’

Resolution Copper has plenty of supporters in town who are eager for an economic boost. The company says the mine will bring 1,400 direct jobs and more than $60 billion in economic value over the project’s estimated 60-year lifespan.

Bill Vogel retired to Superior eight years ago. An avid hiker and outdoorsman, he says he joined a working group put together by Resolution Copper to find out more about the company’s plan in the community. Today, he is one of the company’s biggest supporters and the head of the Superior Copper Alliance.

“The way I look at things in the big picture, somebody is eventually going to mine. I mean, it’s not going to lay there,” said Vogler. “The town’s in deep debt. And without some kind of help from somebody, we’re going to go under. We need a boost.”

Vogler says that while he doesn’t think the mine is a matter of national defense, the politics surrounding the issue doesn’t bother him.

Look before you leap?

Still, what bothers many here is that Resolution Copper may be able to mine the land with little regard for the environmental impact.

Under the terms of the land swap legislation, the company is required to work with the U.S. Forest Service to do an environmental impact study under the National Environmental Policy Act, or NEPA, but it is also guaranteed to get the land, no matter what the study shows.

Once the land is in private ownership, NEPA obligations no longer apply. The legislation specifies that the Resolution Copper will get the land within 60 days of the publication the environmental study, before the full NEPA process is completed, limiting the Forest Service’s ability to modify the company’s mining plans in the public interest.

“NEPA is a look-before-you-leap document. It’s an information-gathering law.  So if you’ve already made the decision to give the land, then what’s the point?” said Roger Featherstone, director of the environmental group Arizona Mining Reform. “The whole study becomes meaningless.”

One of the most controversial components of Resolution Copper’s project centers on how the company plans to extract the copper. Eschewing a more traditional method of mining as too expensive, the company announced it will use a cheaper method called block cave mining, which will result in a crater two miles wide and up to 1,000 feet deep, destroying the surface of the land. Block cave mining will also generate nearly a cubic mile of mine waste, which the company proposes to leave on a parcel of Forest Service land, just outside the town of Superior.

J. Scott Wood is an archeologist who spent 40 years working for the U.S. Forest Service in Tonto National Forest. His job was to find and protect archeological sites and places of cultural importance to Apaches and other tribes affiliated with the forest.

“It’s bypassed all the normal kinds of analysis that we would have done for this kind of project,” Wood said. “We were actually looking forward to the idea of running the project as a normal mining project, instead of a land exchange, since the bill kept not being passed and not being passed, where we could look at alternative mining methods.”

He added: “Everybody could have walked away with what they needed. Apaches could have access to a place that isn’t going to be destroyed. The mining company could get the profits from the copper.”

America Tonight also made multiple attempts to reach the Arizona congressional delegation that advocated for the land swap: Republican Sens. John McCain and Jeff Flake, and Rep. Paul Gosar plus Democratic Rep. Ann Kirkpatrick. All declined to comment or did not respond.

“At the end of the day I think the American people are getting short-changed badly.  They are going to lose an exquisite, beautiful piece of landscape that belongs to them,” said Wood. “And yet a foreign-owned company is going to manage to make billions of dollars of profit off of resources that belong to the entire American public, and that’s the ultimate description of what happened here.”

President Obama signed the defense bill into law in mid-December, but the San Carlos Apaches say they haven’t given up yet. Tribal members organized a two-day protest march to draw attention to their cause, walking 44 miles along the highway from the reservation to Oak Flat.

The San Carlos Apaches aren’t alone. Hundreds of supporters attended the gathering, while some tribe members pitched tents to signal their intention to occupy the land. Environmental groups like the Sierra Club and Arizona Mining Reform, and more than 500 other tribes have voiced opposition to the land exchange.

Nosie says the protest marks the beginning of a new phase in the tribe’s struggle against the mine. The next step will be a long-term occupation of Oak Flat by San Carlos tribe members.

“We are not going to vacate this area. We are going to stand here as Indian people,” Nosie said in an address to a crowd of supporters at Oak Flat. “It is time to face Congress and tell them our demands – nonviolently, religiously; to keep what is sacred and what is holy.”

But just up the road, Resolution Copper has already completed work on a new exploratory shaft. Reaching a depth of 7,000 feet, it is the deepest shaft in North America. According to the company’s website, it will be used to gather information on the ore beneath, anticipating when the land will be theirs.