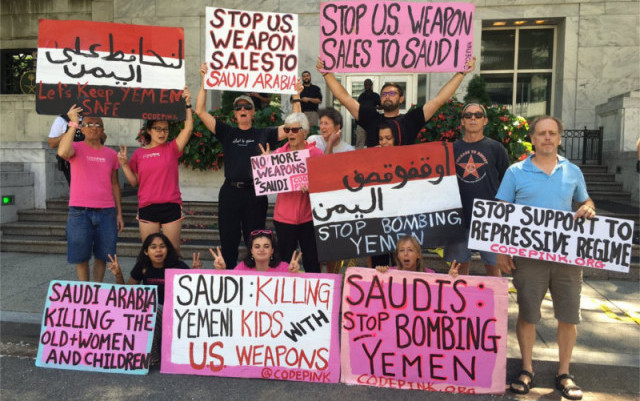 Note: There may be a vote in the US Senate on the issue of Yemen as soon as Monday. We urge you to take action. Mark Ruffalo, in a viral videon seen by millions, made an impassioned appeal for people to call their Senators at 1-833-786-7927 and urge them to end US participation in the war on Yemen.

A Washington crime and cover-up has triggered the world’s worst humanitarian crisis. Call 1-833-786-7927 to tell your Senator to join @SenSanders & @SenMikeLee to end a secretive, unconstitutional U.S.-Saudi war in Yemen. Together, we can help save millions of lives. #StopTheWar pic.twitter.com/EPijIY4GDq

The War Powers Act requires a Senate vote. Lawmakers should not duck their responsibility.

The unlikely alliance of progressive Sen. Bernie Sanders, I-Vt., and constitutional conservative Sen.. Mike Lee, R-Utah, has presented the Senate with an unprecedented opportunity to end the unauthorized U.S. involvement on the ill-advised Saudi Arabia-led side of the civil war in Yemen. The senators introduced legislation last week to stop the United States from continuing to take sides in a civil war which has plunged millions of Yemenis into starvation and undermines America’s security.

Unlike most measures in Congress that expire without ever being considered, this resolution invokes the War Powers Resolution, affording it a special “privileged” status. Under this 1973 law, the full Senate is required to consider the resolution on the floor in the coming days. Every senator will soon have to decide whether they support continuing America’s role in this unauthorized and counterproductive war.

Seldom does Congress vote on war and peace, even though the overwhelming majority of the American people want their elected representatives to do so. According to a recent poll, half of U.S.voters said they would be less likely to vote for their congressional representatives if he or she did not act to withdraw the U.S. from conflicts abroad, such as Yemen. Meanwhile, a super-majority of U.S. voters oppose U.S. military involvement overseas absent a formal authorization from Congress. In short, they support the balance of powers established in the Constitution.

It is clear that U.S. participation in the Yemen War contravenes our laws. President Donald Trump is failing to uphold the War Powers Resolution requirement that Congress has to authorize any long-term military commitments made by the United States. President Barack Obama also failed to uphold this law when he initiated U.S. military support for the Saudi side in 2015.

The Trump administration cites the 2001 congressional authorization for the use of military force, or AUMF, passed in the immediate wake of the terrorist attacks on September 11, 2001, as the legal justification for a small contingent of U.S. special operations forces to target al-Qaeda in the Arabian Peninsula elements in Yemen. AQAP’s ranks are growing from the instability and horrors of continued Saudi bombing of Yemen’s Houthis. Even worse, with Yemenis blaming Washington for its complicity in the bombing and starvation of civilians, our ability to play a constructive role in the region is undermined for years to come.

The civil war, despite heavy U.S. support, is being lost by the Saudi side. Saudi Arabia’s ambitious young leader Mohammad bin Salman, with a substantial stake in Yemen, is discovering what Gamal Abdel Nasser discovered in the 1960s when his Egyptian military forces intervened in Yemen. Today, old-timers in the Egyptian military refer to their excursion into Yemen as “Egypt’s Vietnam.” It is swiftly becoming so for Saudi Arabia. Ironically, the more this defeat becomes apparent, the more desperate the Saudis have become, bombing civilians mercilessly and denying access to food and water as weapons of war.

Undoubtedly, this resolution will face vigorous opposition by some in the Senate. The Senate does not lack for members who either support this counterproductive intervention, recoil from standing up to leadership, or otherwise fear a political price from bucking well-financed Saudi lobbyists and public relations campaigns. In the House, leadership stopped a vote on similar legislation altogether.

But taking a stand and voting on matters of war and peace is Congress’ most solemn duty. With America’s reputation on the line, and our bravest put into harm’s way, legislators have a responsibility to cast a vote. Then, either our servicemembers will know that the American people, through their duly-elected representatives, support this war; or they will know it is time for them to come home.

Despite the well-connected Saudi propaganda machine doing its best to buy influence in Washington and the support of military veterans, most of the people we know at the Pentagon understand all too well that this is an illegal, brutal war that the Saudis are losing, that it fuels anti-American sentiment, and that it empowers al-Qaeda.

Every senator voting to end U.S. military assistance to the Saudi side in the civil war sends the much-needed diplomatic signal to Riyadh that it’s time to bring this mission to a practical conclusion.  Washington should use its influence to seek a political solution to the conflict, end the tragic killing, and let the people of Yemen rebuild their lives.

The War in Yemen and the Making of a Chaos State