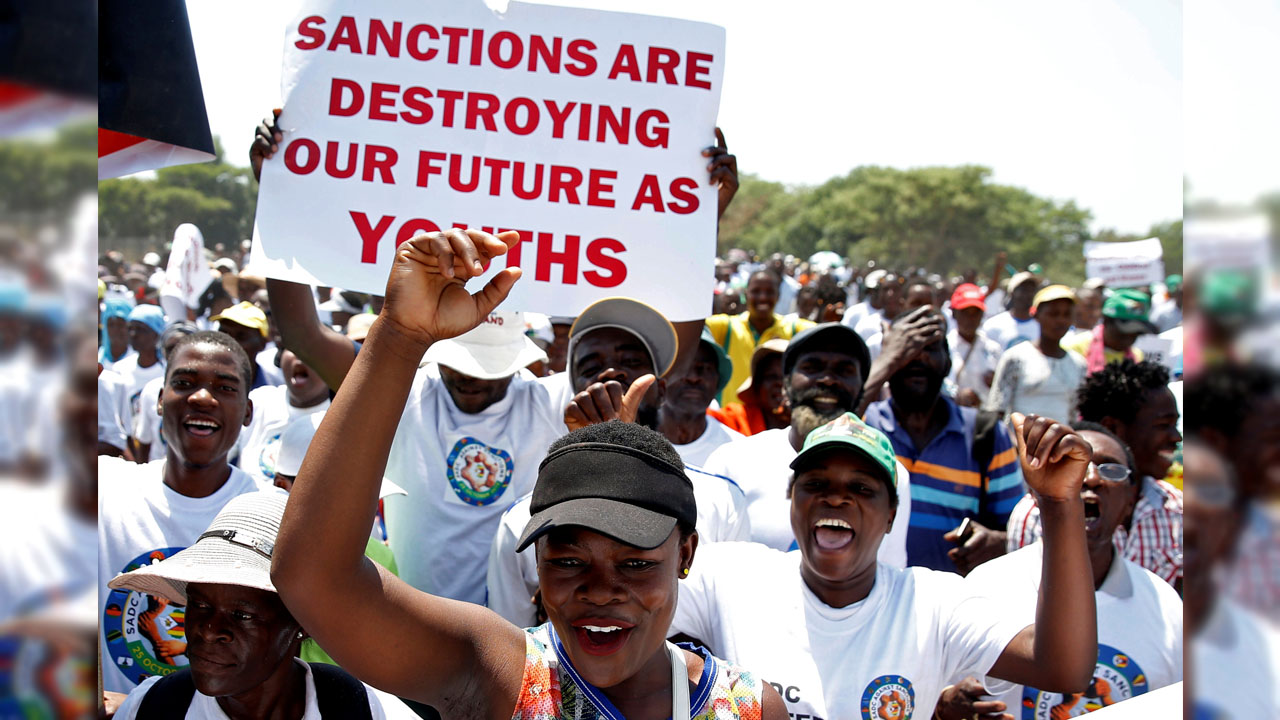 NOTE: In April of this year, my family had a medical emergency that required most of my time and attention. The result is that I am now the sole legal and physical guardian of two young children with significant needs. I hope to return to writing a regular newsletter now that they are in school. There is a lot going on and a lot to do. Solidarity, Margaret Flowers

This month, the Sanctions Kill coalition (Popular Resistance is a member) released its report: “The Impact and Consequences of US Sanctions.” The 35-page report was written in response to the Biden administration’s January call for a review of the US sanctions to determine if they ‘unduly hinder’ the ability of targeted nations to address the COVID-19 pandemic.

To date, there is no word on whether that review has been conducted, but given that the State Department and Treasury are tasked with conducting it, the same institutions that impose sanctions, the Sanctions Kill coalition had no confidence their report would challenge the US’ current foreign policy path of escalating economic war on 39 countries, or a third of the world population.

The Sanctions Kill report found that sanctions, which are being increasingly imposed by the United States in lieu of or in addition to military aggression, cause tremendous suffering and death, violate international laws, harm US industries, place the US in a position of civil and criminal liability and are isolating the US from the community of nations. The corporate media are silent on these harmful effects and criticism of sanctions.

Venezuelan UN Ambassador Samuel Moncada described the impact of sanctions this week at The People’s Forum (view the event here):

“Sanctions are killing us…. They are homicidal. One of the awful effects of sanctions as a weapon, because it’s a kind of war, is that you don’t feel it here. You don’t even realize that sanctions are acting abroad…. You don’t feel it in any way. But we feel them…. That’s why they are so insidious and dangerous. [The US] is waging economic war against millions of people.”

The sanctions imposed by the United States include restrictions on financial transactions, trade and travel, blockades on foreign loans and aid and the seizure of assets. The Sanctions Kill report found these measures violate the human rights of people in affected countries because they block access to basic necessities such as food, medicines and fuel and they prevent maintenance of important infrastructure such as water services, power generation and transmission and transportation. The so-called humanitarian exceptions that are supposed to prevent sanctions from blocking food and medicine don’t work – banks won’t allow the sales and shipping companies won’t transport the goods.

Technically what the United States is doing are not sanctions but are unilateral coercive measures (UCMs), which violate international law because they operate outside the structure provided by the United Nations. Legal sanctions are used as a punishment after a legal process determines a country violated a law. Unilateral coercive measures are imposed by the US and its western imperialist allies based on lies and without due process in order to effect a desired political outcome, such as regime change or retaliation.

For example, following the failed US-backed coup attempt in 2018 against Nicaraguan president Daniel Ortega, the United States Congress passed the NICA Act, which began an economic war against socialist Nicaragua. With presidential elections being held this November, the United States has ramped up both a propaganda campaign against the popular Ortega, who is expected to win, and Congress is in the process of passing the RENACER Act, which will impose more UCMs against Nicaragua.

The Sanctions Kill report also found that the US is imposing secondary sanctions on countries that do business with sanctioned countries, another violation of international law, and is using sanctions to target business people, such as Meng Wanzhou of Huawei, and diplomats, such as Alex Saab. Saab is being held in Cabo Verde where he stopped last year on his way to Iran to negotiate the purchase of food and medicines for Venezuela. The US is working to extradite him while international support for Saab, whose imprisonment violates the Vienna Convention, is growing. Clearing the FOG spoke earlier this year with Roger Harris of Task Force on the Americas after he traveled with a delegation to Cabo Verde to visit Alex Saab. Click here to take action.

Clearing the FOG spoke with two of the authors of the report, international lawyer John Philpot and Latin American solidarity activist David Paul. Philpot predicts a day of reckoning is coming for the United States because the UCMs violate multiple international laws, including the United Nations charter. They are a form of collective punishment, which is a crime against humanity.

As the United States’ status as a global hegemon declines, targeted countries are finding ways to work together to resist the brutal economic wars being waged by the US and build power. For years now, countries have worked on alternative financial instruments to bypass US sanctions in order to do business. One example is INSTEX, a trading mechanism developed by European nations and Iran.

One of the first major acts of defiance against US UCMs was in the spring of 2020 when Iran sent four tankers of oil and equipment to Venezuela despite a large US military presence in the surrounding waters. Recently, Iran defied US UCMs again when it sent a convoy of oil trucks through Syria to Lebanon, which is suffering greatly from an economic crisis and fuel shortage.

Popular Resistance brings you movement news and analysis from around the world every day without advertisements. Make a donation to support this work. Donate here.

Cuba has been under a US economic blockade for more than 60 years but it continues to be a model of international solidarity, especially during the pandemic. Henry Reeves Medical Brigades have been sent to numerous countries to assist them in caring for COVID-19 patients. Now Cuba is in need of aid and Mexico is stepping up to provide it using its naval ships since commercial ships face many barriers due to the UCMs. People and organizations outside Cuba also worked to supply millions of syringes so Cubans can receive vaccinations against COVID-19.

Mexico was the host of the recent CELAC (the community of Caribbean and Latin American states) meetings where leaders openly criticized the Organization of American States as a tool of US imperialism and called for its reform or the creation of a new body. CELAC countries are working on ways to practice greater solidarity in the face of the pandemic, climate crisis and debt.

“The Summit was also a recognition of the political and economic imperative that the governments of Africa and the Caribbean must succeed in restructuring if our black and brown people and nations are ever going to assume their rightful place in the world.”

And this week, during the United Nations general assembly meetings, the foreign ministers of 18 countries met as the Group of Friends in Defense of the Charter of the United Nations and released a statement pledging to work together. They wrote, “…we convey our support to nations and peoples subjected to unilateral and arbitrary approaches that violate both the purposes and principles enshrined in the Charter of the United Nations and the basic norms of international law, and renew our call for the full respect to the inalienable right of peoples to self-determination, as well as the territorial integrity and political independence of all nations.”

Those of us who live in the United States and its allied imperialist nations that enable these serious violations of human rights and international law have a responsibility to act to stop the use of economic warfare through unilateral coercive economic measures. Global power is shifting and we face multiple worldwide crises. It is imperative that imperialist nations change their foreign policy from death and destruction to diplomacy, solidarity and cooperation.

An important step is education so people understand that UCMs are as lethal as bombs and that they affect the whole world, including people living in countries that wage economic war. The SanctionsKill.org website contains numerous resources to help with this including a toolkit that provides you with a power point and script so anyone can give a presentation on sanctions. The toolkit informs about what UCMs are and the specific harms they do.

You can also send the new Sanctions Kill report to your members of Congress and demand they end them now or publicize the report in any way you can – use social media, local or independent media outlets, your organization’s website, etc. We must break through the media blockade and demand the truth be told about the illegality of UCMs and their devastating impact on people in targeted countries. Write letters to the editor when you see articles about sanctions.

Take action to stop the RENACER Act and join the call to free Alex Saab. There are many solidarity organizations that are working to support people in countries attacked through economic measures. One example is the Saving Lives Campaign, a joint effort by people in the US and Canada to provide aid to Cuba.

Ending sanctions will save millions of lives and move us forward on the path toward a world of cooperation, peace and solidarity. Nations like the United States use sanctions because their deadly impacts are not as visible as dropping bombs. We must expose this brutal economic warfare and demand an end to it.