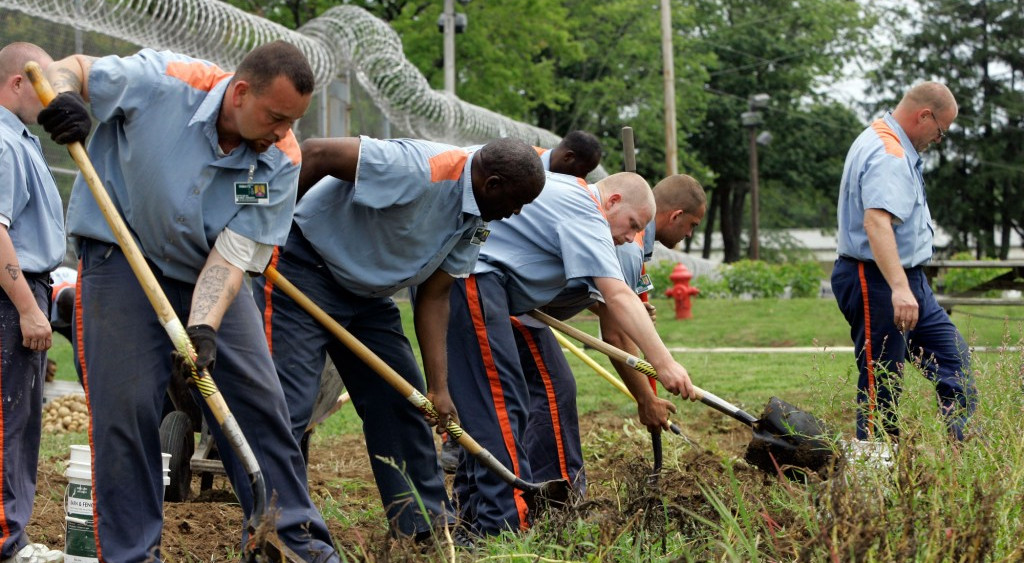 Last week, a Louisiana sheriff gave a press conference railing against a new prisoner release program because it cost him free labor from “some good [inmates] that we use every day to wash cars, to change oil in the cars, to cook in the kitchen.” Two days later, news broke that up to 40 percent of the firefighters battling California’s outbreak of forest fires are prison inmates working for $2 an hour. Practices like these are disturbingly common: Military gear, ground meat, Starbucks holiday products, and McDonald’s uniforms have all been made (or are still made) with low-wage prison labor.

Inmates are exempt from the Fair Labor Standards Act, which requires that workers are paid at least the federal minimum wage. That makes it completely legal for states to exploit inmates for free or cheap labor. More than half of the 1.5 million people in state and federal prisons work while incarcerated, and the vast majority only make a few cents per hour.

Most inmates work in their own prison facilities, in jobs such as maintenance or food service. These jobs pay an average of just 86 cents an hour, and are primarily designed to keep the prison running at a low cost. Others may be employed in so-called “correctional industries,” where inmates work for the Department of Corrections to produce goods that are sold to government entities and nonprofit organizations. The highest median wages for these jobs top out at less than $2 an hour, and they’ve dropped over time—an incarcerated worker is paid less today than they were in 2001. In Alabama, Arkansas, Florida, Georgia, and Texas, most inmates working in prison facilities aren’t paid at all.

It is impossible to discuss prison labor without acknowledging the deep ties the criminal justice system has to the legacy of slavery in the United States. Targeted mass incarceration policies, racial bias, and other structural disadvantages have led to an overrepresentation of people of color—particularly African Americans—in prisons and jails. As activist and author Shaka Senghor notes in Ava DuVernay’s 2016 documentary 13th, “The 13thamendment says, ‘no involuntary servitude except for those who have been duly convicted of a crime.’ So once you’ve been convicted of a crime, you are in essence a slave of the state.”

Though we run the risk of stating the obvious, there is a clear solution available: treating prisoners like people rather than chattel. That means paying prisoners a minimum wage for their work, and making sure the employment options in prison are designed to help people transition into their communities once they are released.

Apprenticeship programs, which provide paid training that combines on-the-job learning with classroom instruction, may be the perfect solution. These programs can equip inmates with a marketable skill, a wage, and a credential that holds value in the labor market and can help them get a job upon release. A recent Center for American Progress report suggests using paid apprenticeships during incarceration to help inmates and their families support themselves after incarceration and reduce recidivism.

However, these programs frequently suffer the same pitfall as other prison work programs—they pay breathtakingly low wages. Since 2008, the median starting wage has been 7 cents an hour and the median exit wage 35 cents an hour—hardly enough to put inmates on the road to financial stability.

If these programs paid decent wages, they could increase economic stability of inmates, effectively easing the path to re-entry. They would allow inmates to pay off debts from their interactions with the justice system and reduce recidivism. They’re not a panacea, but well-paid apprenticeships can help put returning citizens on the road toward a good job and a secure future.

The criminal justice system has historically relied on a system of punishment and exploitation instead of rehabilitation, but we can change this going forward. Treating incarcerated people like human beings by paying them for their work is a good place to start.