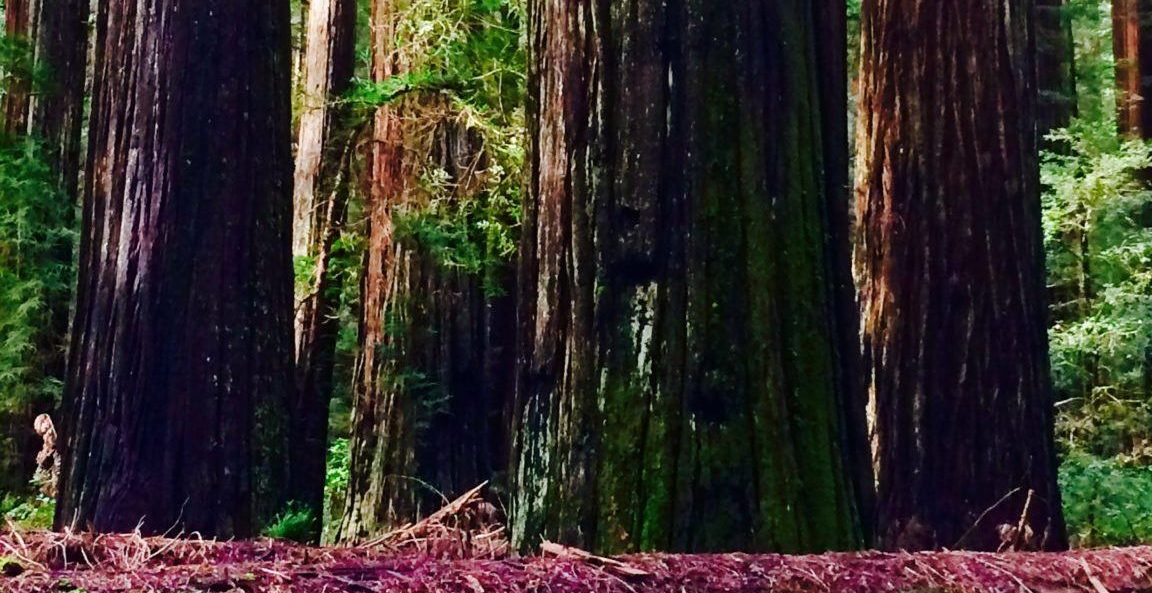 Stopping The Logging Of Redwoods In Jackson State Forest

Logging has begun in Jackson State Demonstration Forest, 48,000 acres of state owned redwood forestland in Mendocino County in Northern California. The forest consists mostly of heavily cut over land – probably logged several times since logging in the County began in the 1860s. This continued when the state acquired the land in 1947 – the hypothesis then was to acquire forestland to apply science to commerce with goal of demonstrating best practices. Today, seventy five years later, it’s not easy to find much that’s “best” in this highly disturbed forest land. Still there are numerous groves of second-growth redwood to be found – remnants of what was once one of the wonders of the natural world.

The Jackson State Demonstration Forest is managed by CALFIRE, the huge state bureaucracy known mainly for fighting fires; that we may be thankful for. Alas, there seems to be very little evidence that CALFIRE is much interested in forest ecology. They do no logging themselves but farm out the work to a garden variety of logging operations, this time to Anderson Logging of Fort Bragg. Financially, it’s no big deal for CALFIRE, a darling of the state in this era of wildfire. Nevertheless, the evidence is that the income (from this “cash cow” as the locals call it) is important for them. Since then Forest’s inception they’ve fought tooth and nail to defeat any and all suggestions to reverse its practice, no evidence to hint that it might be interested in other, better uses for Jackson State. No doubt the high price of timber this spring influenced them to hurry up, but they like other public agencies prefer the fait accompli. They play by the very letter of the law.

The news of new logging plans – all on the far western slopes of the forest, beginning with the “Caspar 500,” the closest to residential communities – was received with disbelief on the coast, where the forest is cherished (even in its present state) by many – hikers, dog walkers, mushroom pickers, bicycle riders. Chad Swimmer, president of the Mendocino Trail Stewards, a bicyclists’ organization, reported he was “heart broken” when he “first heard that CALFIRE was planning logging in my back yard. I was heartbroken and indignant, but I didn’t know how to contest a timber harvest plan (THP). Now I do, I know the protocol. I also understand that this agency considers itself all powerful and unstoppable – with no need to argue with the public about forest management.”

The Trail Stewards took the lead this time around but there is a long history of “forest defenders” here in Mendocino County, and opposition to the plan is widespread and also diverse – ranging from bands of Pomo Indians to school kids from the village of Mendocino. In May, two tree sitters set up shop in a grove of giant trees, one in the “Mama Tree” the other in the “Papa Tree”; they’re still there. Since then, there have been blockades, invasions of sites to be logged, as well as appeals to local, county and state representatives. There was a demonstration at Town Hall in Fort Bragg; there, members of the Coyote Band of Pomo, explained the meaning of the forest to them – a sacred place now and for thousands of years past, a place still home to ancient relics and practices, a place for recovery and restoration. On June 19, the Trail Stewards organized a well-attended demonstration at Caspar, this one where the big log truckers will join Highway one, the Coastal highway, jammed at this time of year with holiday traffic. Bill Heil, a veteran of the Redwood Summer era of the 1990s, explained they “had to get this to stop. They had to get CALFIRE to face the public and talk.”

This opposition and obstruction – the tree-sit, blocking roads, chaining themselves to gates, invading active logging sites – forced Anderson Logging to move down the road to another site. However, this second attempt too was obstructed by protesters, on foot and on bike, as well as random holiday hikers who wondered unknowingly into “closed” areas. The activists used whistles to let the workers know that – above all – they were there, well knowing the danger this implied for all. Then, on Monday, June 21, facing increasing pressure, CALFIRE announced a “pause” in logging the “Caspar 500” section of the forest, as well as its intention to “further engage with our local community.” This was a victory for the activists, certainly, but simultaneously logging was begun several miles to the east, near Fort Bragg, along state Highway 20. Inspired, the activists followed. “We’re grateful that logging here has been paused, a day without logging is a good day,” says Michelle McMillian, the media representative for the “Mama Tree Network.” “We’re not overly optimistic, however. We want to have a conversation but we want more than lip service.”

Opponents of logging since the first years of the Save-the-Redwoods League based their case on the sheer beauty of the redwood grove, and its inspirational value. This has not changed, even with the massive damage done. These groves, even these remnants of ancient coastal forests, remain like nothing else, even the second growth. Only 4% of the old growth redwood forest in California remains, nearly all in overburdened state parks. Reed Noss, the well know advocate of the forests explained it this way: “the redwoods deserve all the lavish terms used to describe them. No one with an open mind could walk through a redwood forest without being humbled. No thoughtful person could stand beneath one of these immense trees, gaze up into its canopy, and not help but think that here is a remarkable organism –so much more than all the board feet of lumber men might cleave form it. Not only are they among the largest living trees, they are among the largest. Their close ancestors have been here since other giants – including dinosaurs- came and went. An entire forest of these trees is one of the most remarkable expressions of nature’s productive capacity. And it is beautiful, truly beautiful.”

We don’t have here in Mendocino the kind of forest Noss sees, but we still have beautiful groves. And we still have the chance that these groves can be the heart of a new forest if this one, today, can just be left alone. A lot, then, is at stake. Alas, however, there’s more, much more. Today, there is a new crisis and a new urgency. McMillian insists that this is not the old movement of tree-huggers versus loggers. “This is about everybody. Climate change doesn’t know sides.” And climate change has indeed become the mantra of the movement. It is now widely accepted that the current mega drought is directly linked to climate change as are the wildfires. The stakes, then, are existential.

CALFIRE has half-heartedly challenged this reality, with some supporters going so far as to deny climate change altogether. The agency insists that drought is not an issue, that logging inhibits fires and that removing old trees increases the sequestration of carbon.

Never mind the massive waste of water, just to keep the dust from the worksites in the woods and truck traffic down the logging roads in this ultra-dry summer. The prospect of wildfires now terrifies literally millions across northern California, and rightly so. These northern counties were developed with little thought to an ecology of drought and fire. We on the coast have long seen the redwood forest as our firewall. It still is but now only to a degree. In 2020 fires raced through redwood stands in Santa Cruz County, devastating large stands of trees even in Big Basin state Park. Professor Will Russell, an environmentalist at San Jose State University, explained the “new normal” this way: “Any honest fire scientist will tell you that small trees burn more readily than large trees. Timber harvest operations target large healthy trees as they supply the highest quality timber products. Once these trees have been removed they are replaced by a regenerating forest of very small highly flammable saplings and sprouts. Timber operations also tend to open up the forest stand which allows for greater air flow providing oxygen for any fire that might start. Anyone who has ever built a fire knows that small sticks with a lot of air space gives the best chance for a successful fire – the same is true for a forest fire.”

Then, of course, there is carbon sequestration. CALFIRE argues that when a large tree is cut, many small ones take its place, hence increasing the number of trees and allowing for more carbon sequestration. Again, the consensus in science seems to suggest the opposite. J.P. O’Brien is currently a post doctoral research fellow at the National Center for Atmospheric Research (NCAR), Climate and Global Dynamics Division, in Boulder, Colorado. He tells us: “Short of burning fossil fuels, cutting down trees is the single worst thing we can do for climate change. Not only do trees directly remove CO2 from the atmosphere and store it for centuries to millennia, the very act of cutting them down results in immediate carbon releases via felling, hauling, milling, and processing machinery that represents a “double hit” to the climate. Climate change presents a clear, present, and ever increasing danger to nearly every aspect of our lives and the earth system, including our terrestrial forests.”

Times are changing here on California’s north coast, and while logging continues – the vast majority of redwood forest land is in corporate hands – the once overwhelming culture of work in the woods and the mills of our counties is greatly diminished, as is the number of jobs and mills. The Trail Stewards circulated a petition that in a very short period of time was signed by more than five thousand supporters. It called for a moratorium on logging, for cultural & tribal sovereignty, unified ecosystem restoration, climate change mitigation and environmentally sustainable economics. (https://www.mendocinotrailstewards.org/forest-reserve-proposal).

Mendocino County is valued right across California, even beyond, for its redwoods, its steep canyons, oak woodlands and its wild, rocky coast line. It is a liberal county; it voted for Bernie twice, in large numbers, and there is widespread support for a Green New Deal. Alas, however, we are a large County with a small population, relatively far from population and media centers. Perhaps this explains the silence of our elected representatives – our city councils, supervisors, assembly members, senators and congressmen, also of course our Governor Gavin Newsome and his new head of the Resources Agency, Wade Crowfoot, virtually all Democrat, virtually all in on climate change. And virtually all prepared to support President Biden’s plan for “conserving” 30% of our country by 2030 – “30 by 30.” But not here. Perhaps there are louder voices. The Mendocino Redwood Company (MRC), owned by San Francisco’s Fisher Family owns 227,000 acres of redwood timberland. In Humboldt County, just north, it owns another 200,000, making it, with holdings in Sonoma County, 440,000 acres, vast holdings, the journalist Will Parrish tells us, the “owner of more redwood forest than any private entity ever has.” This is not insignificant. Then there is the clamor of the developers and the builders and the voices from the past.

The tree-sitters, the blockaders, the forest defenders, trail stewards and local residents and many visitors are appealing for support. They deserve it. Your voice can help.