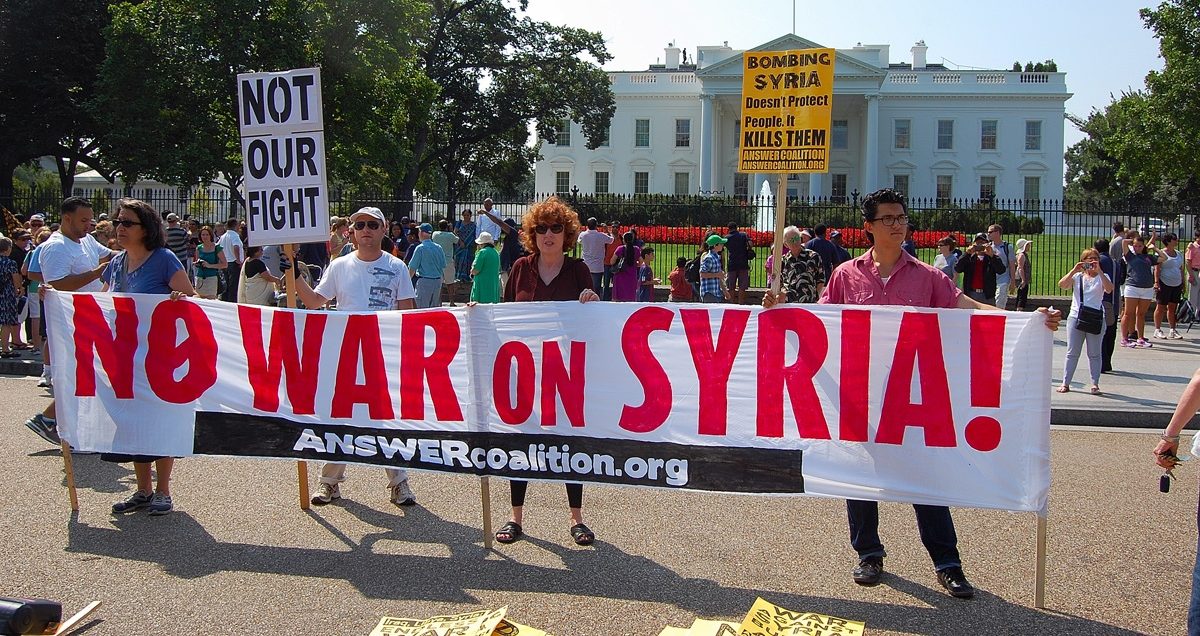 Stopping The War Machine For One Day

I’ve attended most of the major antiwar protests in Washington since 9/11. At a 2005 protest, a cop tried to whack me on the head with a wooden pole. At a 2007 protest, I snapped a picture showing George W. Bush swinging by the U.S. Capitol. But my favorite protest was a potent little ruckus that I almost missed.

On a sunny late summer day in 2013, I ambled to downtown Washington to hike with a bunch of friendly folks in a jaunt starting on the National Mall and heading towards the World War Two Monument and points beyond. But the hike was vexed from the start because someone invited along a “licensed tourist guide.” That short, pudgy fellow proceeded to bludgeon us with every known detail about the history, architecture, and rest room renovations of the Smithsonian Castle. He followed that up with a “Wikipedia on Amphetamines” rendition on the National Museum of Natural History and then commenced rattling at high speed about the National Museum of American History.

And that was when I was summoned by a cheap cigar. That dude’s twaddle was another reminder of the peril of any government licensing program and gave me more sympathy than ever before for Washington tourists.

I exited stage left and headed towards the White House. Admittedly, I didn’t have an invitation for a late morning tea in the Oval Office. But I heard there might be some mayhem nearby that day.

President Obama was saber rattling towards Syria after a chemical weapons attack had recently killed hundreds of civilians near Damascus. It was unclear who perpetrated the atrocity. Syrian rebels prevented United Nations inspectors from surveying the site to verify the details of the attack. That proved the Assad regime did it, according to the Obama administration. The CIA was financing terrorist groups in Syria to seek to overthrow the Assad regime – part of Obama’s attempt to turn the Middle East into a paradise of democracy. Those terrorist groups had also used chemical weapons against civilians but atrocities by U.S. allies never show up on the radar screen inside the Beltway.

The antiwar movement had been comatose for five years, ever since Obama ascended into the White House. All subsequent U.S. bombings and drone assassinations became presumptively progressive and thus not worth denouncing. But the potential of a new war in Syria was a defibrillator shock for moribund activists.

With my Nikon camera flopping around my neck, I turned the corner from 15th Street onto Pennsylvania Avenue behind the White House. That stretch of the avenue had long been closed, with concrete barriers to prevent truck bombs and ice cream vendors from zipping down the way. In the distance, I saw a smattering of demonstrators.

As I got closer, I saw a somber young guy with a crew cut, sunglasses, and an “Iraq Veterans Against the War” t-shirt waving a sign denouncing “Obama the Warmonger.” Some of his buddies were wearing Young Americans for Liberty t-shirts and their right-wing, antiwar fervor was one of the few positive legacies of the Bush administration. They were proudly hoisting hand-made signs that were legible at a distance of 12 feet or less. They meant well but I hoped that none of them were ever put in charge of the highway department’s sign program.

Code Pink – a feminist antiwar group – was on the scene with a cardboard full-size replica of a grinning Obama below a sign – “I have all the evidence I need (just not the facts).” Many activists feared Obama would repeat the Bush administration’s rush to war in Iraq based on ludicrous claims that could not pass a laugh test.

There were a few dozen Syrians on the scene, divided into two groups who passionately hated each other. Most of the Syrians hotly opposed bombing their country but a gaggle of folks were gung-ho for the U.S. government toppling the Assad regime. A couple shoving matches broke out between those demonstrators.

The protest was little more than the distant buzzing of a gnat, barely perceptible on the other side of the high metal fence surrounding the White House.

And then the U.S. Cavalry arrived for the antiwar activists. Okay, it wasn’t the U.S. Cavalry – it was a bunch of hardcore leftists from Baltimore. A busload of 60 protestors arrived and poured into the streets carrying superb signs and brilliant banners identifying them as supporters of ANSWER (Act Now to Stop War and End Racism) . They quickly deployed a glorious bold red NO WAR ON SYRIA! banner, and I photographed four of them hoisting it with the White House in the background. Those protesters marched in an oval while chanting “hands off Syria.” That group knew how to make itself heard raising hell.

The Park Police and Secret Service had mostly ignored the protestors as long as they were a scattered rabble. But the Baltimore team changed the game and officialdom began its intimidation efforts. An overfed Park Police officer waddled into the middle of the street and began ostentatiously videotaping all the protestors. From his vapid visage, I guessed he was named either Wilbur or Clarence. Would the images he captured fatten up secret federal dossiers on the activists? Every few years, another scandal erupts over law enforcement agencies illegally surveilling peaceful demonstrators. Political appointees promise it will never happen again and then the abuse resumes after the spotlight shifts away.

Word circulated among the protestors that Obama would be making a major statement on Syria at 1:15 pm – less than an hour later. Pundits expected that Obama would announce that he had launched a cruise missile attack on Syria. The leader of the ANSWER protestors implored her cadre: “CNN says the antiwar rally is being heard inside the White House – keep chanting and louder!”

As I loitered in the street taking photos and chewing on a cheap cigar, I spoke with conservative military veterans who were far better informed on foreign policy than most Washingtonians. I also palavered with a couple ANSWER zealots about a legendary Baltimore German brewery that had recently gone belly-up.

And then the other U.S. Cavalry arrived – a squadron of mounted Park Police wearing bright blue helmets who practically charged into the peaceful crowd. Some of the Park Police had attached black strips to their badges to hide their identification numbers. I thought that was brazenly illegal but maybe not because they were THE LAW. Covering badge numbers would make it far more difficult for demonstrators to identify specific officers who abused them.

As the horses began to scatter demonstrators, a large truck backed up to the scene and a newly-arrived pack of Park Police began unloading segments of metal fences which they carried forward. Police initially connected the metal fences around the outskirts of the demonstrators on the street and on the sidewalk next to the White House fence. Then, a few minutes later, cops began moving the fence lines towards each other. Politico reported later that day: “About 100 peace activists were fenced into a protest zone on the sidewalk in front of the White House… Police officers blocked other protesters — and a reporter — from entering the protest zone, saying the one opening was an exit only.”

The Obama administration was reviving an odious Bush administration legacy – free speech zones. After the 9/11 attacks, preventing Lese Majeste – any affront to the dignity of the supreme ruler – trumped the First Amendment. When Bush traveled around the nation to speak, the Secret Service would browbeat police into setting up “free speech zones” where dissidents could be quarantined far from the media and public view. I wrote one of the first exposés of this censorship charade in late 2003. Anyone who quietly held up a the “No War for Oil” sign outside the “free speech zone” could be jailed. The feds lost several court battles but the abusive practice continued because few protest groups could afford to fight the World’s Largest law firm, the U.S. Justice Department.

I was standing in the middle of the area being cordoned off, watching free speech being eradicated yard-by-yard in real time. As the fence line came closer to me, I felt like I was watching G-men hammer nails into the coffin of the First Amendment. Judges had deferred so many times that police could do as they please, confident that no federal official would be jailed regardless of how many constitutional rights they trampled.

As the “free speech zone” narrowed, police began menacing anyone who refused to leave the street. After I was repeatedly threatened with arrest, I foot-dragged towards Lafayette Park, moving just fast enough to avoid getting handcuffed. A dozen years into the federal supremacy era after the 9/11 attacks, anyone who did not instantly obey arbitrary commands was now guilty of “disturbing the peace.”

At 1:15 p.m., Obama stepped up to the microphone in the Rose Garden in what the New York Times called a “hurriedly organized appearance… as American destroyers armed with Tomahawk missiles waited in the Mediterranean Sea.” As antiwar chants could be heard in the background, Obama stunned the media by announcing that, though he had decided to attack Syria, he would seek congressional authorization before launching the missiles. Obama declared, “I’m confident in the case our government has made without waiting for U.N. inspectors.”

That protest and Obama’s declaration spurred me to write an article that the USA Today headlined: “We Can’t Trust White House Syria Claims.” The editors added a sub-headline that made me burst out laughing: “The administration needs to learn from the past and tell the whole truth.” Ya, I was sitting on the edge of my chair awaiting the whole truth from the feds. Scoffing at the secrecy surrounding Obama’s drone assassination program, my piece asked: “If the Obama administration feels entitled to withhold details on its killing of Americans, why should anyone expect full disclosure regarding a foreign regime’s alleged killing of its own citizens?” The article concluded, “America cannot afford another ‘trust me’ war based on secret evidence…. Citizens are left clueless about perils until it is too late for the nation to pull back.”

Happily, American public sentiment strongly opposed plunging into another Middle East quagmire and Congress never greenlighted Obama’s attack on the Assad regime. Obama promised 16 times that he would never put U.S. “boots on the ground” in the Syrian civil war. He quietly abandoned that pledge and, starting in 2014, launched more than 5,000 airstrikes that dropped more than 15,000 bombs on terrorist groups in Syria. But the U.S. government might have intervened far more aggressively without the courage and caterwauling of White House protestors along with many other Americans who pushed back against the warmongers.