Stories Of Resistance And Resilience From The Pacific Islands To Canada

By Staff, www.medium.com
May 4, 2017
| Resist!
Stories Of Resistance And Resilience From The Pacific Islands To Canada2017-05-042017-05-04https://popularresistance-uploads.s3.amazonaws.com/uploads/2017/12/popres-shorter.pngPopularResistance.Orghttps://popularresistance-uploads.s3.amazonaws.com/uploads/2017/05/1-OcbKSzvYVXpU2-KFmfa1ow-150x99.jpeg200px200px

This May, a delegation of Pacific Islanders who are fighting climate change from the front lines of impact, are headed to one of the dirtiest fossil fuel extraction sites on the planet: the Canadian tar sands. These Pacific Climate Warriors are disappointed that Canadian Prime Minister, Justin Trudeau, has deliberately broken his international climate promises by approving new tar sands pipelines. And they are asking him to meet with them in Canada. Here is the story leading up to this journey:

This was the scene on October 17, 2014, where a group of Pacific Island activists stood up against massive coal ships trying to leave the Port of Newcastle in Australia. They did this to stand up for the Pacific and take action on climate change.

It was an incredibly pivotal moment where Pacific Climate Warriors took to the water to highlight Australia’s insistence on exporting destruction to the Pacific Islands by expanding the fossil fuel industry.

This moment also told a powerful story of how Pacific Islanders were not going to stand idly by as climate change destroyed their island homes. They made it clear that they would fight to keep their homes above water, and to keep dirty fossil fuels in the ground.

The Warriors made an intentional decision to paddle their canoes, as a form of resistance, against the destructive fossil fuel industry. They did this to honor their ancient traditions of canoe building, and pay homage to their connections to the water and their beautiful history of voyaging.

Over the last decade, a network of young Pacific Islanders began to rise peacefully in response to world leaders inaction on climate change.

These Pacific Climate Warriors, facilitated by 350.org Pacific, have spent years organizing and building a climate movement that is deeply rooted in the shared values of their grassroots network. Their unified acts of resistance bring together 15 Pacific Island nations.

At the foundation of the work of the Pacific Climate Warriors are organizing principles centered on faith, community, humility and their connections to the land, the ocean and their ancestors.

Over the last eight years, 350.org Pacific has taken the lead from young Indigenous peoples living on the front lines of climate change. These communities are using the strength of their culture and faith, to stand up for the Pacific, and live the mantra “we are not drowning, we are fighting.” They hope to offer in solidarity, this spirit of resistance and resilience to Indigenous and front line communities in Canada.

Now, the Pacific Climate Warriors are headed to Canada.

“Although, the Pacific Climate Warriors live with the realities of climate change, they are also constantly shaping what resilience and resistance to this global crisis looks like. As Canada’s Prime Minister Trudeau chooses to champion the expansion of the tar sands, by building pipelines like Kinder Morgan, he is directly condemning our Pacific people to rising seas and uninhabitable Islands. We will not sit by and let this happen.”

An integral value shared by the Warriors, is their unwavering belief in the power of storytelling and bearing witness. They understand that as custodians of the Pacific, and as communities at the forefront of climate impacts, it is their duty, as moral witnesses to these injustices, to raise their paddles and defend their Island homes. Their hope is to bring their stories of climate impacts and Pacific resilience to the people and government of Canada, so they can understand the very real consequences of expanding the tar sands. 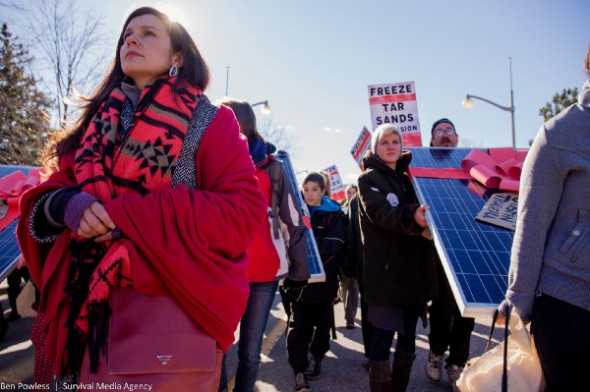 The Canadian tar sands are one of the dirtiest sites of fossil fuel extraction in the world. Carbon emissions from the tar sands are one of the biggest drivers of climate change globally, and locally, they poison the lands and water, contributing to health and environmental crises which disproportionately impact Indigenous communities. Pipelines are the arteries of this oil patch — they make it economically viable to continue expanding the tar sands. That’s why an Indigenous-led social movement in North America has emerged opposing pipelines like Northern Gateway, Kinder Morgan, Keystone XL, and Energy East.

The Pacific Climate Warriors will start their journey in Canada by visiting the tar sands to bring their prayers of hope and healing right to the heart of the destruction. While they are there, they will meet and build solidarity with Indigenous peoples opposing the tar sands from the front lines and show them that they are seen and heard in the Pacific. 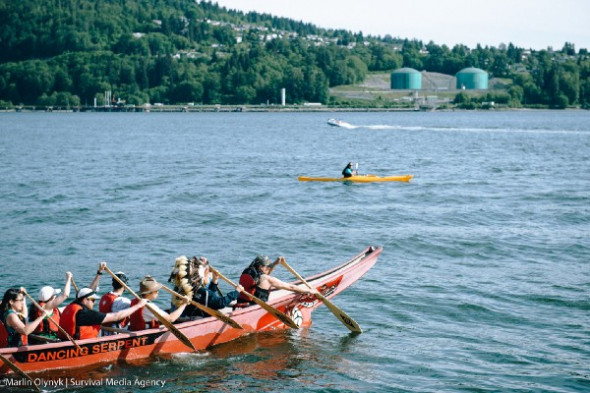 From there, the Pacific Climate Warriors will travel to Vancouver to meet with Indigenous peoples resisting pipelines on the West Coast of Canada. They will visit the terminal point of the Kinder Morgan pipeline and hold a joint water ceremony with the Tsleil-Waututh First Nation to connect their respective fights to stop fossil fuel expansion.

The Pacific Climate Warriors know Prime Minister Trudeau is not the leader he claims to be on climate action and that he needs to immediately withdraw his support for the expansion of the tar sands, because these decisions critically threaten the people and communities of the Pacific. That’s why the Pacific Climate Warriors are inviting Trudeau to meet with them during their journey to Canada to explain his broken climate promises.

Will you echo this invitation and tell Prime Minister Trudeau to meet with the Pacific Climate Warriors?

The world needs to keep fossil fuels in the ground and the Pacific Climate Warriors will continue to challenge the expansion of the fossil fuel industry and share their stories of living and resisting from the front lines of climate change.

Climate change threatens all of us, so we must all act together to stop this.

Follow the journey of the Pacific Climate Warriors and participate in events by visiting: https://350.org/raise-a-paddle/.