Street Artists Rise To The Occasion

Above photo: “Journey to Justice” by Yrneh Gabon Brown.

In the midst of international protests against racist violence, artists are using their skills to send a clear message: Black lives matter.

The massive protests in Los Angeles in response to the murders of Ahmaud Arbery, Breonna Taylor, George Floyd, and so many others organized through the Black Lives Matter movement generated an outpouring of engaging and provocative visual artworks. Open-air installations, murals, posters, “street art” works, and similar efforts abound, many in my Venice/Mar Vista neighborhood where I regularly jog.

I participated in many of those protests and saw some of these efforts personally. Cumulatively, these, and similar works throughout the United States and the world, have added to the burgeoning tradition of political art—a movement that has inspired social activists for centuries.

One of the most ambitious projects occurred in Los Angeles in late May. Dozens of artists from all over the sprawling city exhibited work outside their homes or in comparable public spaces, because private galleries and museums were closed due to COVID-19 restrictions. This sprawling exhibition, titled Drive-By-Art, invented by Warren Neidich, Renee Petropoulos, Anuradha Vikram, and Michael Slenske, enabled artists to show their work and avoid isolation. For two weekends, viewers could drive up to these spaces and see some imaginative works ranging from the abstract to the political.

One of the most striking and chilling works in that project was by veteran Jamaican American artist Yrneh Gabon Brown. He directly addressed the murder of Ahmaud Arbery and others in a dramatic installation on his lawn in South Los Angeles. Entitled “Journey to Justice”, this complex artwork reflects Brown’s longtime use of his art to agitate viewers, unmask reality, and encourage community engagement. His obligation is to reflect his times and generate social activism, a vision that has informed his entire artistic career.

Here, viewers see the central figure of Ahmaud Arbery, who was hunted and gunned down by white supremacists in Brunswick, Georgia. Arbery’s smiling face stares out, reminding people that this vibrant young life has been taken, another victim of racist violence. The tires and the flags represent twenty-six of the most recent murders of Black Americans. Some of the names on the flags are familiar, others are not: Amadou Diallo, Michael Brown, Eric Garner, Tamir Rice, Walter Scott, Sandra Bland, Stephon Clark, Breonna Taylor, Philando Castile, Botham Jean, and too many others.

Throughout the weekend, Brown also used his skills as a performance artist to lie on the ground and scream “I can’t breathe,” before rising and continuing his movements. The audience responded by calling out George Floyd’s name during the performance, adding a memorable participatory element to this pop-up event. Together, Brown’s work was one of the most remarkable of the many examples following the racist murders of recent years.

“Street art” has likewise played a prominent role in 2020 LA-based pop-up expressions. A major figure from that genre has been Jules Muck, well known in the Venice scene for her murals and graffiti efforts. The British-born artist’s creations are ubiquitous, appearing on walls, storefronts, cars, and dumpsters, known locally as “Muck-jobs.” She uses the moniker “Muckrock” and appears regularly on Instagram.

In the wake of the murder of George Floyd, Muck turned to plywood—the boarded up windows of closed businesses—for artworks depicting the victims of police brutality. Her canvases are the visual counterparts of protesters’ demands to say their names.

All of these artworks, in heavily traveled public spaces, bring home the message that the lives of the victims of police brutality and other racist violence will not be forgotten.

Figure 2 is on the front of a women’s clothing store on a fashionable Venice street. These Black lives are forcefully rendered: Ahmaud Arbery, Trayvon Martin, Breonna Taylor, and George Floyd. Passersby and motorists alike view these images and likely pause, at least briefly, to reflect on the gravity of their deaths and the immense significance of the recent worldwide anti-racist protests. 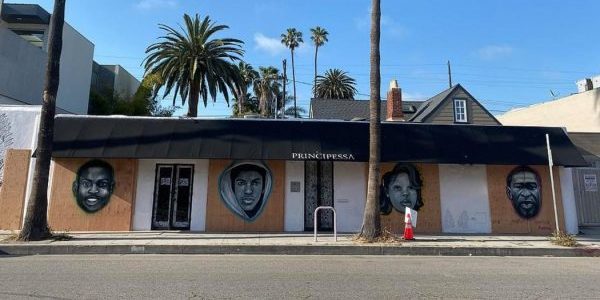 To underscore that powerful message, Muck added a textual element to another Venice pop-up painting she recently completed. Figure 3 depicts Floyd uttering his final almost unbearable words before Derek Chauvin snuffed out his life: “I Can’t Breathe” and “Mama Mama.” 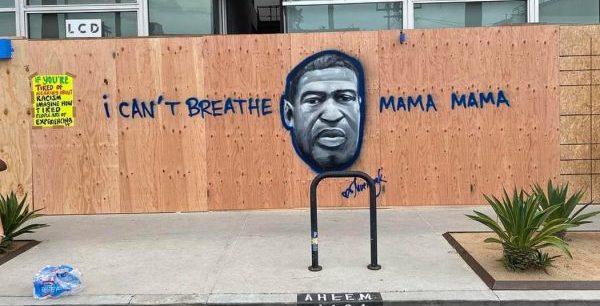 Many of these are fleeting and will not last for more than a few weeks. Still, they offer pedestrians and others vivid reminders that the events of spring and summer 2020 may well mark a turning point in our nation’s long racist history––and perhaps even a recognition that some white people have awakened to their positions of power and privilege.

In Minneapolis, the initial epicenter of the protests, the most widely reproduced artwork was the swiftly painted, but high quality and colorful George Floyd mural. It features an image of the murdered victim with the words “George Floyd” prominently across the composition, with “I Can Breathe Now” across his chest in smaller text. Behind Floyd are the names of other victims of police violence. That mural will likely endure in the large body of American community murals.

Floyd and related murals proliferated throughout the world: Houston, Oakland, New York, Atlanta, Palestine, Pakistan, Syria, England, and so many other locales. Los Angeles also had its fair share. Most were hastily produced, reminiscent of the murals that quickly commemorated the March murder of rapper-activist Nipsey Hussle.

Few of these works are likely to endure as major examples of politically engaged community murals, but they have served to reflect the powerful sentiment of outrage and sorrow that informed the massive protests in the streets of the Los Angeles area.

One example by artist Sara Sandoval, “We Stand With You” (Figure 4), painted on a corner, features Breonna Taylor and Colin Kaepernick together. Both, in profoundly different ways, are martyrs to the cause of racial justice—Taylor more tragically with the loss of her life, and Kaepernick with the loss of his professional football career. 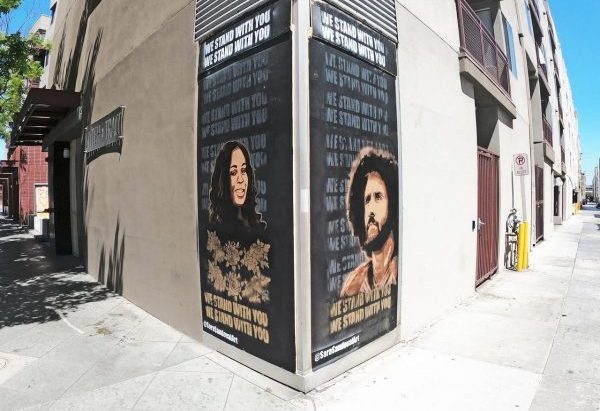 mong the most vibrant pop-up artworks have been the posters that emerged during the protests in the LA area and elsewhere, of which I personally saw scores of examples. Some were printed versions that contained texts alone: Black Lives Matter; Defund the Police; No Justice, No Peace; Resist Hate; Stop Police Brutality; Say Their Names; and similar phrases. Some were discarded on the streets while others made their way to windows and lawns.

Still, others were hand-drawn and carried by protesters during the marches. Several were simply slogans, and others had actual drawings. Many were hasty and crude, but a few were remarkably imaginative and highly artistic—genuinely part of the venerable tradition of political poster art.

The most notable collection of recent Los Angeles-area protest posters has been assembled and exhibited in SoLA Contemporary, a nonprofit artist-run alternative arts organization. Its exhibition “Protest in Place,” curated by Peggy Sivert, collected a cross-section of posters from these Los Angeles demonstrations. This gallery has provided a remarkable public service for the Los Angeles community, especially in its minority Black and Latinx Crenshaw neighborhood.

Figure 5 highlights some of these spirited examples, including outstanding visual imagery and provocative text. Ending white silence, voting, combined with invocations of the fateful year of 1619, reveals the entire tone on the streets. This show reflects, above all, the continuing power of poster art to advance the cause of social justice. 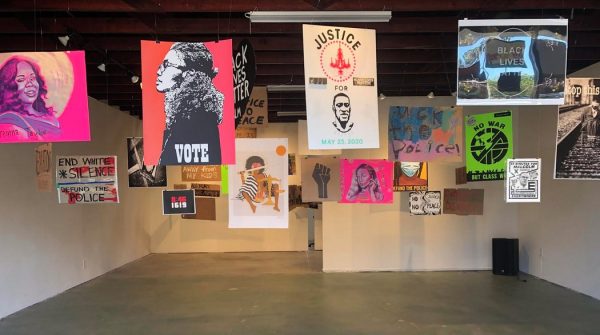 Visual art, including the pop-up art produced in the heat of “battle,” is an invaluable component of the historic movements toward racial justice, dignity, and equity. As long as people strive to make an imperfect world a better place, artists will rise to the occasion. Los Angeles artists, joining their creative compatriots throughout the world, have risen to this historic challenge.

Paul Von Blum is senior lecturer in African American Studies and Communication at UCLA. He is a longtime civil rights and political activist and the author of many books and articles on political art, expressive culture, education, and law.