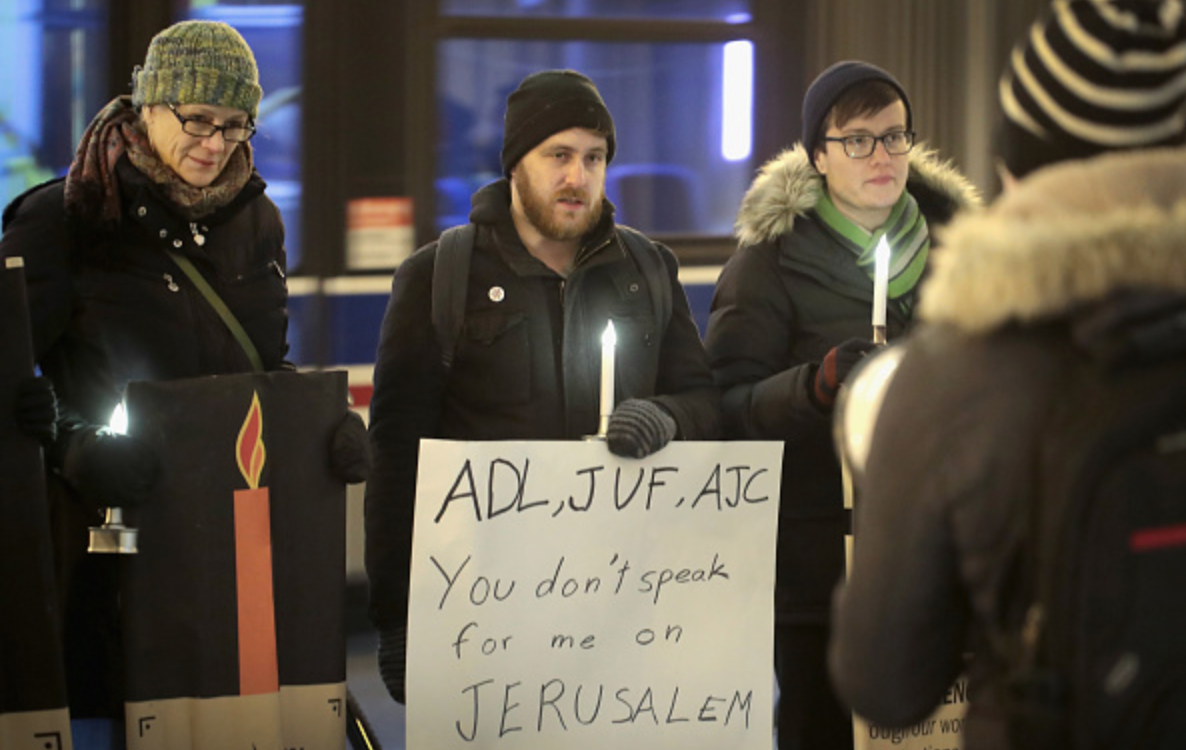 Above Photo: Chicago, Illinois – Demonstrators with Jewish Voice for Peace Chicago protest President Donald Trump’s decision to recognize Jerusalem as the capital of Israel on December 14, 2017 in Chicago, Illinois. The decision by the Trump administration has provoked protest throughout the U.S. and the Middle East. Scott Olson / Getty Images.

An IfNotNow workshop offers lessons for bridging the divide.

As trainers, coaches and activists on Israel-Palestine issues, we have found ourselves in the middle of many heated intergenerational arguments. Disagreements can range from campaign tactics to who is most to blame for the continuing conflict.

Cherie recalls a time shortly after the 2014 Israel-Gaza war, when a young Jewish woman screamed at her during a training session. “Why isn’t your generation outraged about what is being done by Israel to Palestinians? Why aren’t you with us in the streets?” she said. Cherie thought for a long time afterwards about what she asked of her. As a young adult, Cherie was in the streets to protest the Vietnam War. She has certainly fought hard for decades to end the occupation. But why wasn’t she protesting in the streets now? Is there a generational divide in how we’re approaching the Israeli-Palestinian conflict now?

Cherie’s reflection highlights some of the challenges facing intergenerational work on the Israeli-Palestinian conflict among U.S. Jews. Many elder Jews, who have worked diligently to build Jewish peace organizations in the U.S. to resolve the conflict, came of age shortly after the Holocaust and the founding of the state of Israel. Their views on Israel would understandably be more mixed or even sympathetic than the views of many young adult Jews, who came of age after 1967 and have only known the occupation and Israeli military rule over Palestinians.

There can be a tendency among elders to discount important, fresh thinking and organization building of young adults. And there can be a tendency among young adults to sideline elders, thinking they had their chance and now it’s time to step out of the way. These prejudicial attitudes need to be addressed or strong intergenerational work on Israel-Palestine will falter.

To explore intergenerational concerns for U.S. Jewish activists on the issue of the Israeli-Palestinian conflict, and to demonstrate a model for bridging these struggles, we embarked on a program with leaders in IfNotNow. While Cherie contributed to the beginnings of New Jewish Agenda and Brit Tzedek v’Shalom, Andrew was involved in the launch of IfNotNow — a U.S. Jewish social justice organization focused on Israel-Palestine and ending American Jewish support for the occupation.

At its founding in 2014, IfNotNow made a strategic decision to focus its outreach and membership on young adult Jews — to unite them symbolically as the future of the Jewish community. While engaging young Jews has been the primary focus to date, IfNotNow has been assessing how to remain a youth-led movement while also examining ways to work with elders. This assessment has been a part of a broader strategic planning process that will culminate in a re-launch of the movement in the spring.

This was a perfect moment to put together a series of intergenerational sessions for IfNotNow  to explore young adult Jews reaching for common ground and understanding with Jewish elders. We had an even 50-50 split of young adult and elder participants. Each young adult either invited an elder to participate with them or was paired with an elder who applied separately. Twenty six people participated in the three-part workshop series, which took place in the fall of 2020.

The activities and lessons learned from these sessions informed our recommendations for building strong intergenerational coalitions.

According to Jewish Youth for Community Action, adultism is the everyday, systematic and institutionalized oppression that young people face at the hands of adults. Young people are born with capable, intelligent minds. Even so, some adults assume that young people’s thinking isn’t worthwhile, and they can’t make their own choices. In reality, what young people often lack is much needed context to make decisions. Instead of providing that context and then letting young people choose for themselves, adults often made those decisions for them.

We were all young people at one point in time, so we’ve all felt the effects of adultism. We may have internalized negative messages out there about young people. Then, as we grow older, we tend to accept societal hierarchy based on age, thereby conditioning us to accept hierarchies based on other identities such as sexism, racism, ableism and others.

What can young people do to combat adultism? Practice speaking up in any situation. Make decisions and notice how those decisions play out.

What can elders do to combat adultism? Ask young people what they think before sharing your perspective. Refrain from giving unsolicited advice. When prompted, provide young people with context, and then allow them to make their own choices. This will help young people build confidence in their own thinking.

Ageism is the discrimination of elders. The word choice of elder is deliberate: It is a term of respect often used by Native and Indigenous peoples to demonstrate honor for older people in their communities.

There are many institutional examples of ageism, including mandatory retirement regulations in many fields, age discrimination in hiring, healthcare priorities that exclude elders (for example, prioritizing younger patients for ventilators during COVID shortages) and the assumption that all cognitive difficulties must be a “natural” result of ageing instead of the result of an illness that needs attention and treatment (for example, many elders get confused when they have bladder infections, but instead of testing for these infections, doctors will just assume the confusion is a sign of ageing and dementia).

There are many negative messages given to elders every day. Examples include: “You are ‘over the hill;’” “You aren’t needed any more;” “You are irrelevant.” Elders internalize these messages, believe they are true, and then act that way and even treat other elders with disdain. Elders might feel ashamed of looking older and feel compelled to dye their hair, get skin wrinkle treatments, etc.

What can elders do to combat ageism? Remember that you still have valuable contributions to make and participate fully alongside young people in movement work.

What can young people do to combat ageism? Seek out elders to learn from their experiences.

Drawing on curriculum from the National Coalition Building Institute and our experiences as facilitators, we designed and delivered a three-part program for IfNotNow to explore opportunities and obstacles for working across age. Former IfNotNow staffer Danielle Raskin and volunteer leaders including Rel Bendahan played significant roles in the execution, and we are grateful for their insights and support. The experience involved the following skills and practices:

There’s clearly an appetite for intergenerational collaboration in our movement work, whether the issue is Israel-Palestine, the climate emergency, immigration or others. We must invest in political education around the issues of adultism and ageism if we are to successfully build multigenerational coalitions. The key is to take a relational approach and be able to listen deeply to one another. As one young adult participant reflected after our final session, “There is room for everyone and we need everyone… The movement needs us to be ready to hear from each other.”