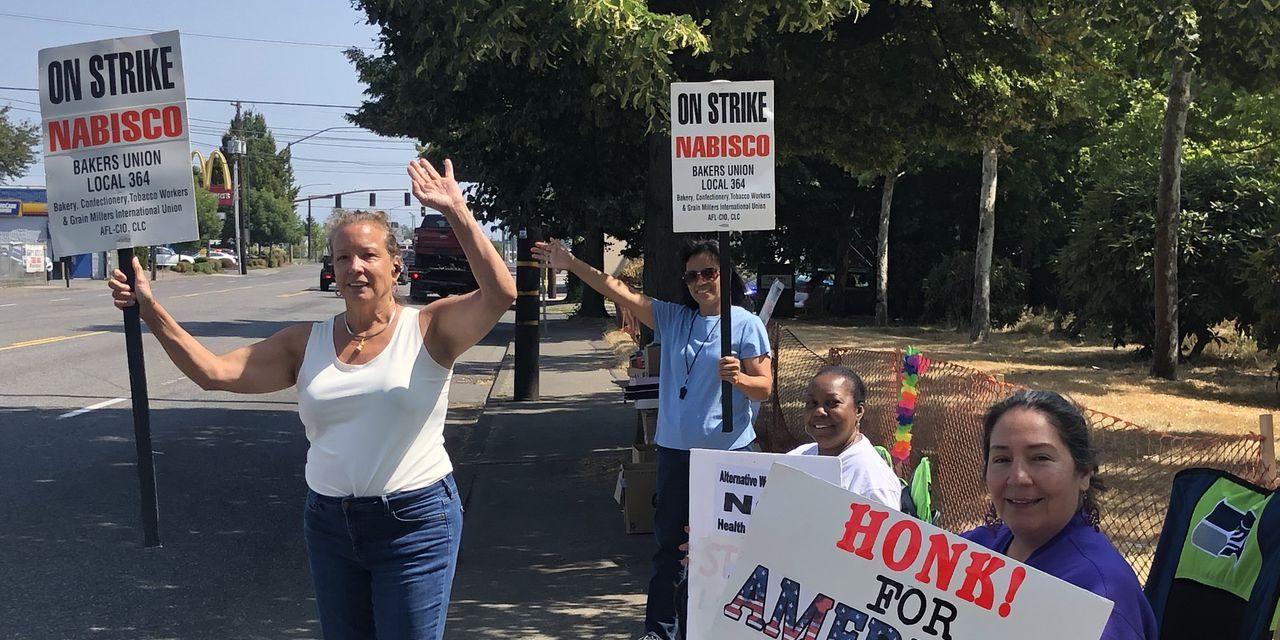 Strike At Portland Nabisco Bakery Spreads To Five Other Facilities

Above Photo: Mondelez International employees and supporters picket outside of a Nabisco plant in Northeast Portland on Wednesday, August 18, 2021. Therese Bottomly.

Oregon – A strike that began at the Nabisco bakery in Northeast Portland on Aug. 10 has spread to five other facilities across the United States and gained national attention with both politicians and celebrities voicing support for the workers.

Workers at the Nabisco distribution center in Norcross, Georgia, on Monday became the latest group of employees to go on strike. Approximately 1,000 members of the Bakery, Confectionery, Tobacco Workers, and Grain Millers union are now on strike across six Nabisco bakeries and distribution centers nationwide.

The strike began in Portland earlier this month when about 200 workers walked off the job after Mondelez International, the parent company of Nabisco, proposed scheduling changes during contract negotiations that workers say would limit overtime pay and proposed providing new hires with a more costly healthcare plan. The new offer comes after the company eliminated its pension plan in 2018.

Mondelez International said in a statement that it was disappointed with the strike and felt it had proposed a competitive offer that would set up the “U.S. bakeries for future investment and long-term success.”

Laurie Guzzinati, a spokesperson for Mondelez, said production is continuing at the facilities where workers are on strike and the company doesn’t anticipate any disruption in the distribution of Oreos, Chips Ahoy and the other cookies and crackers that Nabisco produces.

The growing strike, however, has drawn national attention and support from democratic politicians, and at least one celebrity.

Actor Danny DeVito indicated last week that he would boycott Nabisco products until the demands of workers are met. He tweeted “NO CONTRACTS. NO SNACKS” — a slogan that has now become commonplace at the 24-hour picket line outside the Northeast Portland bakery. In a tweet last week, U.S. Sen. Bernie Sanders, I-Vt., called on Mondelez to treat its workers with “dignity and respect.”

“As the pandemic rages on and we continue to ask the most of our essential workforce, we reject race-to-the-bottom employment practices,” Merkley, Wyden and Blumenauer wrote.

Cameron Taylor, a business agent at Bakery, Confectionery, Tobacco Workers, and Grain Millers Local 364 in Portland, said the union met with Modelez this week, but negotiations remain stalled. Still, he said his members have been encouraged by the response they’ve seen.

“It’s gained traction and sparked a response from people that’s kind of surprising,” Taylor said. “It’s our fight, but I think it’s kind of struck a nerve with the public.”

Rep. Wlnsvey Campos, D-Aloha, a member of the BIPOC caucus, said that advocates have to stand in solidarity with frontline workers, like those at the Nabisco factories, who have been asked to work long hours and risk their health during the pandemic, and too often have not received the respect and compensation they deserve.

“Throughout the COVID-19 pandemic, we’ve seen the sacrifices of frontline workers and particularly with this strike we’ve heard stories of workers who have been working brutal hours, some 12 days in a row,” Campos said. “All the while, Nabisco has been sending their jobs elsewhere, they have been looking for ways to reduce their pay and benefits.”

The strike comes on the heels of Nabisco shutting down factories in Fair Lawn, New Jersey, and Atlanta earlier this summer.

Bakery, Confectionery, Tobacco Workers, and Grain Millers International President Anthony Shelton accused Nabisco in a statement earlier this month of closing the bakeries with union jobs and sending them to Mexico. Mondelez said no work was sent to Mexico as a result of the factory closures this summer.