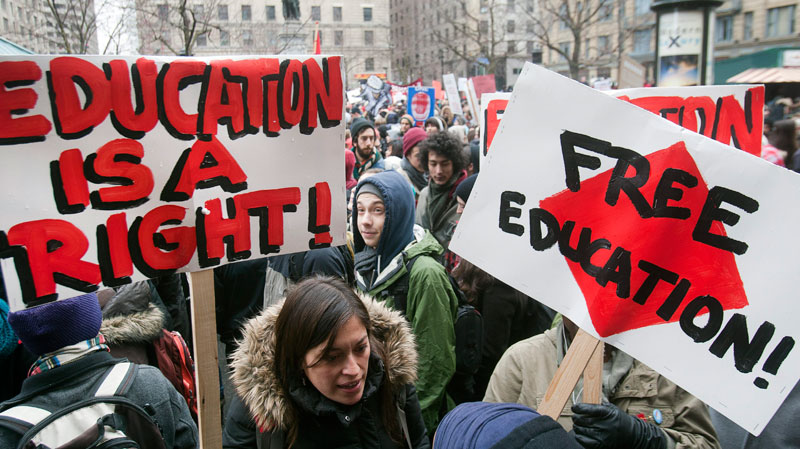 Once again, Congress is talking about how to fix student debt without actually talking about student debt or the cost of higher education. To date, the negotiations have been focused on where to set the interest rate charged to students. It currently stands at 3.4% but is set to double on July first to 6.8%. This is like arguing about how to save a person drowning in a lake by quibbling over how deep the water should be: 100 feet, or 200 feet? In May, Senator Elizabeth Warren (D-MA) proposed a bill to cut the rate to 0.75%—the same amount that the Federal Reserve charges to banks. She has recently called for a grassroots movement to back her bill, recognizing the futility of trying to get it through a Congress hungry for campaign dollars from the likes of Sallie Mae. [Influence Explorer, 2012] While we are of course deeply in favor of building a movement around the debt crisis, we think that any such movement must target the root of the problem, rather than pruning the foliage. In a truly democratic society, nobody would have to go into debt to earn a diploma. Education should be empowering, but debt-financed education serves only to ossify inequalities. Higher education should be available to all, regardless of ability to pay. Public two- and four-year colleges should be free, funded as a public good, and all current student debt should be erased.

To understand how this would work, it helps to understand that the major reason tuition has nearly sextupled since 1985 [Rampell 2012] is the evisceration of state and federal funding. [Delta Cost Project, 2010] When states stop investing, college administrators must turn to Wall Street. This leads them to think like CEOs. They slash course offerings that cannot squeeze past their one-dimensional cost-benefit analyses. They eliminate full-time faculty positions and hire more low-paid, part-time instructors who can’t provide the individual attention and mentoring that is particularly important for lower- and middle-income students. [On average, almost three quarters of all college teachers nationwide are adjuncts.] They know that phasing out tenure in favor of means-testing has the added advantage of removing a powerful source of accountability for administrators’ actions.

In order to make up for financial shortfalls, colleges have increasingly turned to issuing bonds, using tuition as collateral to secure loans from Wall Street. For example, in 2012, the University of California sold almost a billion dollars in bonds set to mature over the next 100 years. That means UC students’ tuition dollars will be used to line the pockets of big investors over the next ten decades. To ensure a steady flow of riches, financiers hold colleges hostage by threatening to ruin their credit ratings if tuition does not go up [Mondics 2013]. When students can’t find the money, they must take on more debt to pay ever-rising tuition bills. The profit-mongers on Wall Street are happy to oblige. They bundle up the debt into asset-backed securities to be sold to global investors. 85% of securitized student loans are financed on the global market. [Harris 2012] Because the federal government prohibits discharging student debt via bankruptcy in all but the most extreme situations (and until recently guaranteed repayment via the Federal Family Education Loan Program), the 1% is once again guaranteed gangbuster profits. Student loans are great business – and it’s a growth industry.  Twenty percent of families carry student debt, but almost forty percent of young families do. There is more than $1 trillion in outstanding student debt (more than any other type of non-housing debt [New York Fed 2013]), nearly one third of which has been accumulated in just the last five years [Harris 2012]. The crushing weight of this debt drags down the hopes of its individual bearers–by limiting career choices, straining relationships, and wearing away at mental health [Kibbe 2009, Morris 2011]. It dampens the vibrancy of society as a whole by channeling monies and energies into debt repayment rather than, well, almost anything else.  (For a particularly egregious example, doctors in delinquency on their medical school debt are prohibited from treating patients most in need [Mukherjee 2013].)

With a situation so desperate, one might think that any help would be welcome. But what good does it do to lower interest rates without addressing the rising cost of college? (Indeed, lowered interest rates might force tuition to grow even more quickly to make up for financiers’ lost profits.) The current debate taking place in Congress is a distraction at best and delusional at worst.

The problem is simple: we keep plunging people into inescapable debts in order to finance their futures.  This has to end.  Here’s how it can:

1. Eliminate all outstanding student debt.  The $1 trillion of student debt is a shackle on the futures of millions of students, especially students who are otherwise disempowered. Student debtors are less likely to start families, choose public service careers, or be able to build their lives in ways that include more than just following a plan to repay loans [Morris 2011]. Is that the kind of society we want?

2. Make education a public good again.  Many young people today are unaware that college was free or virtually free in the United States for much of the 20th century, as it still is in many countries around the world. Publicly financed higher education is the only way to return sanity to the system and reclaim our democracy. Moreover, publicly financed colleges and universities are eminently affordable.  For the money spent on the ten years of the Iraq War so far, we could provide completely free public higher education at every single two and four year school in the country – for the next 58 years [CostOfWar 2013, SHEEO 2013]. And this isn’t even taking into account the fact that the federal government already spends over $23 billion a year just to prop up the current debt-financed system. [Konczal, 2011]

3. Zero-interest, shared-risk loans to attend private colleges. Setting aside the question of whether private colleges are desirable at all, of course. Taking banks and profit out of the equation will go a long way towards ending the debt spiral.  The federal government should provide zero-interest loans to students who choose to attend accredited, tax-exempt private institutions. It should also be illegal for colleges and financial institutions to sell student debt as derivatives.  Securitizing student loans obfuscates the true risk associated with these loans [Harris 2011] and has already led to a bubble in the student loan market, echoing what we just witnessed in the realm of mortgage-backed securities and the housing market [Zumbrun & Torres 2013]. Even better, getting rid of servicing fees and bank middlemen will dramatically reduce costs overall, and thus lower the price of attending college [Konczal 2011].

4. Complete fiscal transparency at all universities, public & private.  If an educational institution wants to receive a federal tax exemption, it must provide a full accounting of its finances to the public, not the ersatz documents they get away with today. But transparency is nothing without democratic accountability: faculty governance must be strengthened (the revival of tenure as an institution would be a welcome start) and students must be brought into the decision-making process.

In an alternative reality where Congress were not bought and paid for, this plan would be “centrist” and the Warren plan would be considered deeply conservative. Since we don’t live in that world, we believe that the only sensible thing to do is to resist student debt. It is immoral, illegitimate, odious, a drain on both those who must bear it and the society in which they live. We believe that a true grassroots movement of student debtors–the movement we want to be a part of–will organize a collective refusal to pay. When student debtors realize their collective power in this way, then we might suddenly find ourselves in a world where politicians are forced to treat education as a public good.