Strikes By US Workers Outpacing Rate In 2018

Above Photo: From WSWS.org

With new strikes this month by hospital workers in Toledo, Ohio; teachers in Oregon, Tennessee and North and South Carolina; and international strikes and protests by Uber and Lyft drivers, the number of major work stoppages in the United States is on pace to surpass last year’s total.

After the US unions reduced strike action to historically low levels in the nine years following the 2008 financial crash, American workers were involved in 20 major work stoppages in 2018, involving a total of 485,000 workers, the highest number since 1986. The growth of class conflict in the US was part of a marked resurgence of strikes around the world as workers rebelled against a decade of falling real wages, government austerity programs and an unprecedented transfer of wealth from the working class to the financial and corporate ruling elite.

So far this year, there have been 17 major strikes or lockouts, involving at least 229,000 workers. Of these, 120,900—more than half—have been teachers, school employees and grad students. While many of last year’s teacher walkouts—including in West Virginia, Oklahoma and Arizona—were against Republican-led state governments, there have been major strikes this year against Democratic Party-run city and state governments in Los Angeles, Oakland and Sacramento, California; Denver, Colorado; Chicago, Illinois and the state of Oregon. Although the union is trying to prevent it, a second one-day teachers’ strike in Sacramento, California is scheduled for May 22 to fight budget cuts, layoffs and a threatened state takeover of the public schools.

Of the nearly half million strikers in 2018, 379,200—or 78 percent—were educators. This year, teachers and school employees are being joined by significant sections of health care, retail and other workers. This includes the 31,000 Stop & Shop supermarket workers who struck last month in New England, 24,000 University of California Medical Center workers who had one-day strikes in March and April, and the ongoing strike by 2,000 nurses, technicians and support staff at Mercy Health St. Vincent Medical Center in Toledo, Ohio.

On Thursday, May 16, 39,000 UC Medical Center service and patient care technicians are set to strike against outsourcing.

Contracts for large numbers of public sector workers are also expiring this year. In New York City, the agreement covering more than 40,000 subway and bus workers expires on Thursday, May 16. Some 46,000 California state workers have contracts expiring in July and face a battle against first-year Democratic Governor Gavin Newsom, who has pledged to continue the austerity program of his predecessor, Jerry Brown. The contract for Service Employees International Union (SEIU) Local 1000, the state’s largest union, representing 95,000 employees, expires in January. The contract covering 22,000 Chicago Public Schools teachers, who last struck in 2012, expires on June 30. 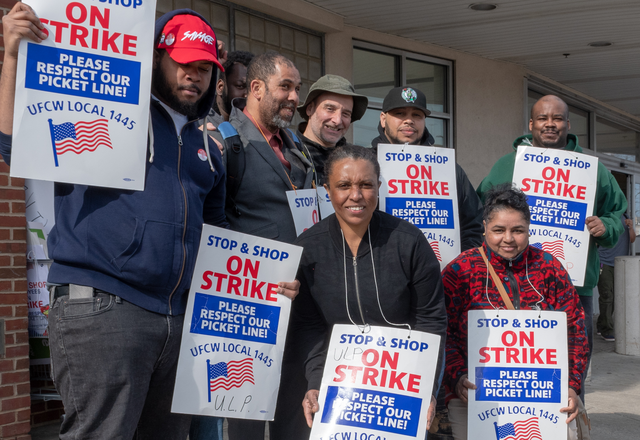 There has been only one significant strike this year in the manufacturing sector, involving 1,700 workers who build locomotives in Erie, Pennsylvania for Wabtec, formerly GE Transportation. After 10 days, the United Electrical Workers (UE) union shut down the strike, capitulating to the company’s demands.

Despite the best efforts by the United Auto Workers, United Steelworkers and other industrial unions, manufacturing workers who have suffered under decades of union-backed concessionary contracts are also coming into struggle.

Strikes have also hit sections of high-tech and so-called gig economy workers, including last week’s internationally coordinated walkout by Uber and Lyft drivers fighting against their “independent contractor” classification, which allows the ride-sharing companies to avoid paying the minimum wage, overtime pay, workers compensation and other benefits, while shifting work-related costs onto the backs of the workers. Late last month, President Trump’s Labor Department signaled that it would back the misclassification of millions of gig economy workers as “independent contractors” instead of employees.

Last week, more than 200 video game industry workers, employed by Riot Games, walked out of the company’s Los Angeles headquarters to protest a decision to force workers to settle sexual harassment suits against the company in private arbitration. The US Supreme Court recently ruled that workers could not come together in class action suits to oppose on-the-job harassment, wage theft or other abuses and had to settle their grievances individually through arbitration.

The Trump administration and the congressional Democrats are engaged in a bitter conflict, largely over foreign policy and how best to suppress growing anti-capitalist sentiment, which the financial aristocracy sees as an existential threat. Both parties, however, are united in their commitment to escalate the class war against workers, which has fueled the rising stock market and funneled unfathomable sums into the bank accounts of the super-rich.

Several Democratic Party politicians, including Bernie Sanders and Ohio Congressman Sherrod Brown, have feigned support for the nurses in Toledo and other striking workers. This is aimed at boosting the credibility of unions such as the UAW, which has been caught taking bribes to sign pro-company agreements. The Democrats fear that workers will break free of the corrupt unions, which have long suppressed opposition to the bipartisan war on the working class.

But that is precisely what is needed. New organizations of struggle—rank-and-file factory and workplace committees, which are democratically controlled by the workers themselves—must be built to link up every section of workers in a common struggle against austerity and social inequality. This includes preparations for a political general strike against both corporate-controlled parties and the capitalist system they defend. 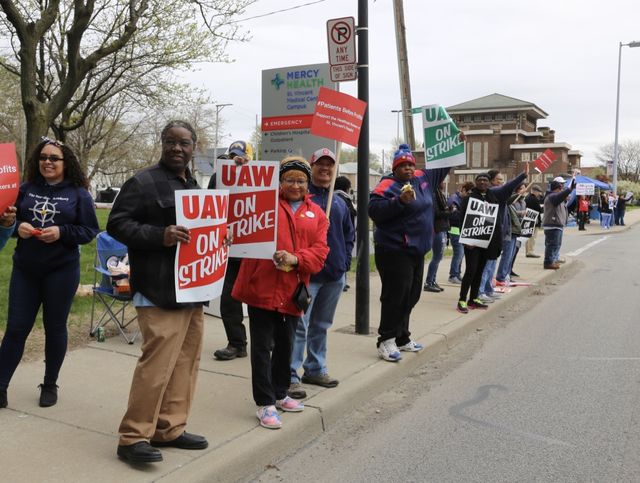 According to Trump, the Democrats and the mainstream media, the US is enjoying an economic boom, with the lowest levels of official unemployment since 1969. But while past boom periods saw a significant rise in workers’ wages, the hourly pay of US workers rose a mere six cents year over year in April, according to the Labor Department’s jobs report released earlier this month. And that paltry increase was up from the even more meager four-cent increase in March.

Taking inflation into account, real wages have risen only 1.3 percent over the past year. In real terms, accounting for inflation, the average wage today has about the same purchasing power as wages did 45 years ago.

According to a soon-to-be-released Federal Reserve survey cited by the Wall Street Journal, one-third of so-called “middle-class” American adults cannot afford a $400 surprise expense, such as a medical emergency or car repair bill. These adults facing “financial fragility,” in the words of Fed Governor Lael Brainard, are, in fact, working class people, with 2018 household incomes of between $40,000 and $85,000.

Meanwhile, Wall Street handed out bonuses of $27.5 billion last year as corporate profits, stock buybacks and dividend payments reached near-record levels. The stock market is hovering around 26,000, a more than four-fold rise since the depths of the financial crisis 10 years ago. This is despite fears of the global impact of trade war with China.

Trump is demanding more interest-rate cuts by the Fed to push the Dow Jones average up by another 10,000 points—that is, another 40 percent. The only way US corporations will be able to generate the levels of profit necessary to sustain these inflated share values is through “a massive intensification of the levels of exploitation of the working class,” David North, the chairman of the International Editorial Board of the WSWS and national chairman of the Socialist Equality Party (US), said in his May Day remarks.

This is the objective impulse that underlies the ruling class’s turn to authoritarian forms of rule and the promotion of fascism and war around the world. It is also the impulse for an explosive growth of struggle by the working class, of which the current strike statistics are only an initial and pale expression. This objective movement of the international working class is the basis for the growth of support for a socialist alternative to the capitalist system.