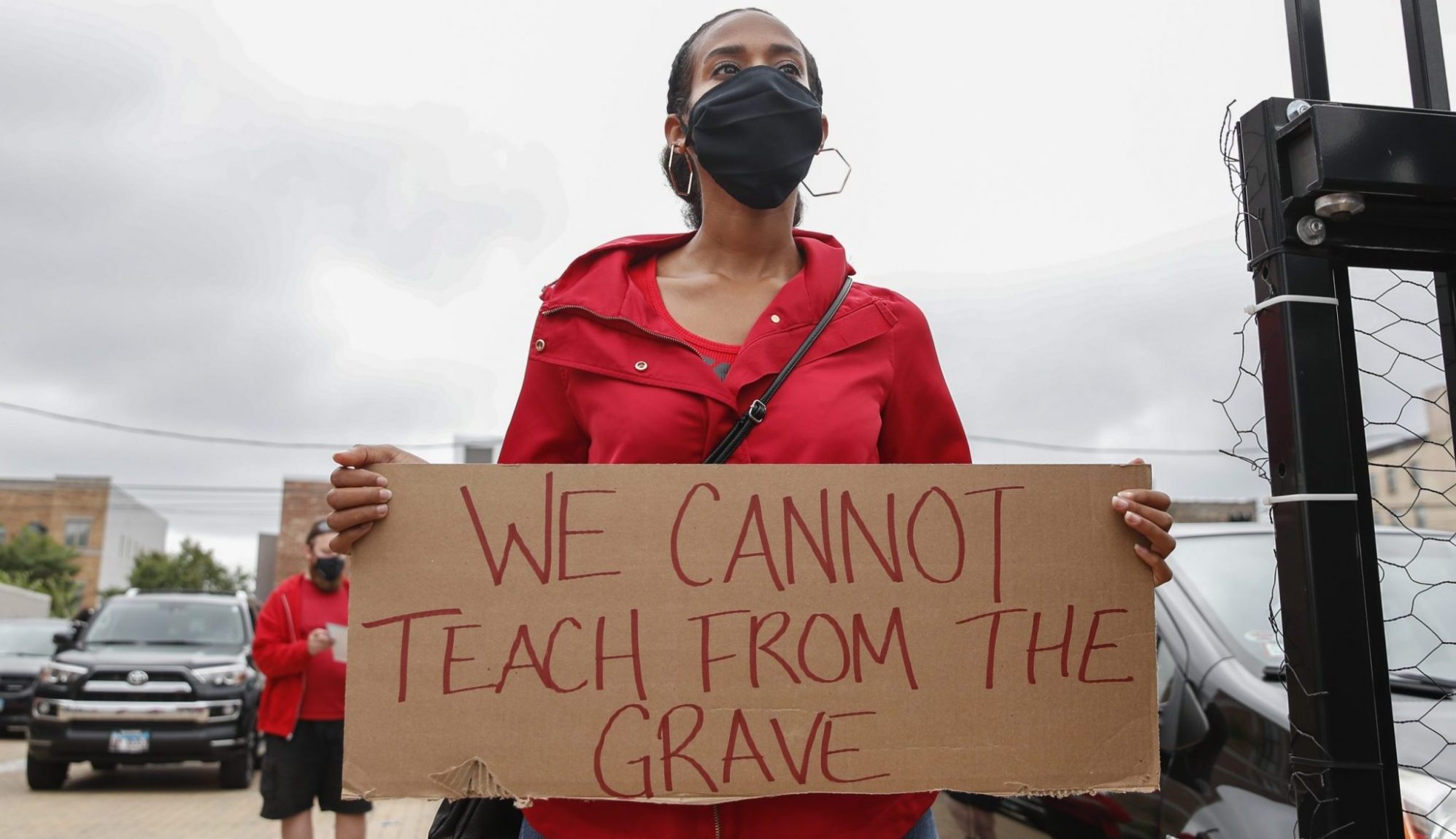 Across the country, a growing number of students, teachers, and parents are resisting pressure to return to the classroom before all teachers and students are vaccinated—and in Baltimore, students are preparing to strike in support of their teachers’ safety.

During a Jan. 26 school board meeting, 18-year-old high school senior Joshua Lynn, a former student school board commissioner, announced plans for a student strike against in-person instruction until teachers are vaccinated.

"Understanding that teachers can no longer strike… students will be doing a student strike."-former student School Board Commissioner Joshua Lynn says students will strike against plans to send teachers back to the classroom prior before they are fully vaccinated. pic.twitter.com/Dw35UEejyt

“Reopening … should not be followed through …. unless all teachers are FULLY vaccinated,” Lynn, who recently recovered from COVID-19, told The Real News. “The goal is for students to not come to school…Continue with online learning, but not coming to in-person school. Just so that we were making the message clear that we want to make sure that our safety for our teachers and ourselves [is] held to at the highest and utmost respect before anything.”

Organizers are urging all students to not attend in-person classes when in-person education resumes for kindergarten through second grade on Feb. 16, and third through fifth grade on March 1. “Covid kills. We aren’t out of the woods. Attend classes from home!” a flyer reads.

In a statement posted to Twitter, Lynn also called for students to be involved in negotiating the district’s reopening plan, a plan to make public transportation safe for the 30,000 that rely on it to travel to school, increased investment in remote learning, nurses in every school, and the suspension of standardized testing.

The pushback against reopening schools in Baltimore is also happening in many other cities, and counters the narrative that it’s in the best interest of students to return to the classroom, almost a year after the virus shut down schools for 50 million students nationwide. Over 80,000 people died of COVID-19 in January, making it the deadliest month of the pandemic.

“Putting students back in school does not fix the root problem within school systems, specifically BCPSS,” said A’niya Taylor, a high school senior and student organizer. “The root problem is lack of true equity. And it shows in the plan to reopen schools.”

This week, American Federation of Teachers President Randi Weingarten argued that schools can be reopened before mass vaccination, if widespread testing is implemented: “The nation’s more than 98,000 public schools could be open soon, getting students back to in-person learning,” Weingarten said.

“Let’s get our children back in the classroom where they belong and all of us need them to be,” Weingarten and Dr. Rajiv J. Shah, president of the Rockefeller Foundation, wrote in USA Today.  “[Widespread testing] must become a way of life in schools … as frequently as twice a week for teachers and staff, and once a week for students.”

Shah and Weingarten cited New York City as a district that successfully implemented widespread testing in the fall in order to reopen schools. However, all schools were closed again on Nov. 19 when the city’s positivity rate passed 3%, and currently only elementary schools have reopened.

Weingarten’s stance puts her at odds with teachers across the country, including in Chicago, the nation’s third largest school district. On Monday, President Joe Biden acknowledged the concerns of Chicago educators.

“The teachers, I know they want to work,” Biden said. “They just want to work in a safe environment, and as safe as we can rationally make it, and we can do that.”

Chicago teachers refused to return to the classroom this week, and argue the school system has failed to implement COVID-19 protocols necessary to safely reopen for in-person learning. On Sunday, 70% of teachers voted to continue virtual instruction and defy orders to return to the classroom. Negotiations between the Chicago Teachers Union (CTU) and the Chicago Public School Board remain deadlocked.

“I feel that the board is not negotiating anything in good faith about a safe reopening plan and they just want to open schools,” Kenzo Shibata, a high school teacher and an official with CTU, which represents the city’s 25,000 public school educators, told The Real News.

CTU has urged school and city officials to quickly vaccinate teachers, which is expected to begin in mid-February. Shibata’s wife has Stage 4 cancer and is immunocompromised, and he’s been unable to get vaccinated as supplies remain scarce nationally.

Around 70,000 elementary and middle school students are expected to return to in-person classes on Monday, Feb. 1. Shibata said Chicago teachers want to avoid a work stoppage, but are prepared to strike if necessary. “If the board allows us to continue to work remotely, then we’ll continue working remotely through this school year. Once they start locking people out, forcing teachers out of the Google classrooms, which is the only legal way we can connect with our students, that’s when you know a strike might actually be on the horizon,” Shibata said.

Chicago teachers have argued that classrooms lack proper ventilation and the district has failed to provide cleaning supplies and personal protective equipment, concerns that have been echoed by educators across the country.

The solidarity strike by Baltimore City public school students was influenced by Baltimore teachers’ pronouncement that they oppose plans for expanded in-person teaching.

In Baltimore, only 28 of 108 elementary and middle schools—which are set to reopen first under the district’s plan—have completed upgrades to their ventilation systems, the Baltimore Brew reported. The district has vowed to complete the repairs to the remaining buildings before they reopen, but some teachers, parents, and students remain opposed to in-person learning. Baltimore’s school buildings are the oldest in the state, and decades of underfunding has resulted in frequent HVAC failures. In 2018, images of Baltimore City Schools students in their coats in freezing classrooms—the result of malfunctioning HVAC systems—went viral and sparked outrage.

Baltimore’s reopening plan is optional for students. The school district cites the finding that zero cases of in-school transmission have been found thus far to support their reopening plan and has partnered with Johns Hopkins University to vaccinate teachers on an expedited basis. The Baltimore Teacher Union notes that it is almost impossible to prove where transmission occurred, and that there have been dozens of positive cases at school sites. They argue that at the current pace, it will take months for all teachers and staff to be fully vaccinated. Maryland is ranked 30th nationally in vaccinating its population.

Baltimore Teachers Union President Brown said in a statement that it is unsafe to reopen schools without vaccinating teachers and support staff.

“We miss seeing our students in person more than anyone. But we will fight against a plan that asks us to participate in something that endangers our students, our selves, and our communities,” Brown said. “Given the enormous amount of dangers and unknowns, we urge the CEO and school board to listen to educators and to cease moving forward with this plan, which will result in no better learning and a lengthening of the pandemic’s hold on schools.”

In a statement to the school board, the Parent Community Advisory Board also said they opposed the district’s reopening plan.

“The idea of returning to in-person is like looking down the barrel of a gun,” said parent Kiera Davis-Griffith.

On Tuesday, multiple news outlets incorrectly reported the Centers for Disease Control and Prevention published a study that suggested schools could safely open with the right precautions in place. As education reporter Rachel Cohen noted, in reality, the new study was written by epidemiologists affiliated with CDC, but was not new official guidance. As Cohen has reported, studies show that in-person education can exacerbate community spread and hospitalizations when community transmission is already high.

The teachers union in Montclair, New Jersey, just outside of New York City, also refused to report to work on Monday. They said the school buildings were not safe and the district had not been transparent about its reopening plan. The union representing educators in Los Angeles, the second-largest U.S. school system, is pressing for teacher vaccinations, more funding, and the elimination of student assessments during the pandemic.

“We are going to have some tough bargaining challenges ahead and … we have to be ready to fight,” said United Teachers Los Angeles President Cecily Myart-Cruz on a call last week with members.