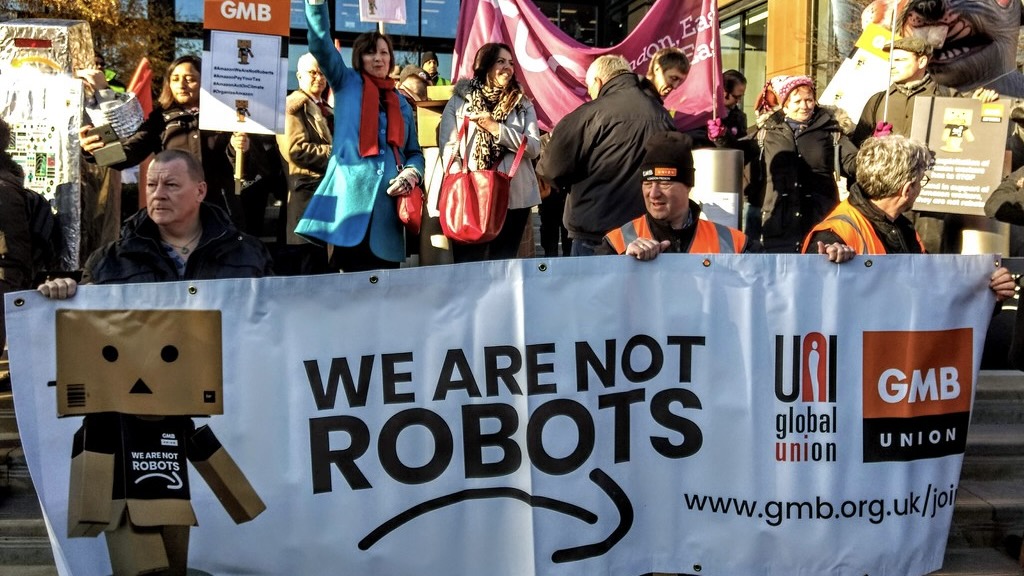 Above Photo: GMB union and War on Want protest outside Amazon headquarters in 2019. War On Want.

Workers across at least 4 Amazon warehouses in the UK have staged walkouts to protest pay offers that would raise wages by only 0.35-0.50 per hour. This will amount to a real-terms pay cut as the UK’s inflation is on track to hit 13%.

Amid a landmark wave of labor unrest in the UK, workers across at least four Amazon warehouses have staged wildcat strikes this week to protest a new pay offer.

On August 3, over 700 workers at the Amazon facility in Tilbury, Essex downed tools and launched a protest in the warehouse cafeteria against a pay offer of a mere 0.35 ($0.42) increase per hour. The offer would amount to an increase of 3%, at a time when inflation in the UK is projected to rise to 13%, amounting to a real-terms pay cut for workers.

The strike action soon spread to another Amazon warehouse in Rugeley, Staffordshire. Over a 100 workers walked out to protest a 0.50 pay increase offer, with one worker telling Birmingham Mail that it was an “embarrassment of [an] announcement that comes as a mockery towards current employees”.

The action is being supported by the GMB Union, which has been organizing workers at Amazon facilities in the UK for years. Amazon does not recognize any unions at its warehouses in the country.

“Amazon continues to reject working with trade unions to deliver better working conditions and fair pay. Their repeated use of short-term contracts is designed to undermine workers’ rights,” said Steve Garelick, a GMB Regional Organizer. The union is seeking a £2 ($2.41) per hour wage increase to “better march the demands of the role and cope with the cost of living crisis”.

GMB has reported that the unrest spread to other facilities on August 4, with workers in Bristol and Coventry also holding protests.

According to the Trade Union Congress, workers in the UK are set to experience a 6.2% fall in wages over the next two years. Earlier in July, the Office for National Statistics (ONS) reported that wages had fallen by 3.7% in the three months up to May, the fastest rate of decline since records began.

Speaking to news outlet Novara Media, a worker stated that his colleagues at Tilbury considered the pay offer as a “kick in the teeth” – “During Covid we were required to still come in and work. Many people made sacrifices. Many workers felt it was shameful from Amazon Tilbury. Many workers are trained in multiple areas. So in a day a worker could be going to pack, then stow, then picking. All extra jobs for just 35p more.”

Videos posted online showed a member of Amazon management telling workers– “This is not going to get us anywhere. You wanted to make a point, you made the point”. The manager then went on to say that the action in the cafeteria was “not safe” citing the temperature, to which workers responded “we are okay” and “we’re used to it”.

In other videos shared online, workers have accused Amazon of treating them like “slaves”. Workers at the Tilbury facility have previously also reported appalling working conditions, including 10-hour shifts with barely any breaks, and being denied ambulances in cases of injury or illness.

Garelick stated that Amazon had threatened to fire Tilbury workers if they were caught filming. Despite these threats, hundreds of day-shift workers continued their protest on August 4. Following the protest, Garelick reported that the company’s Human Resources department had removed the pay of hundreds of workers.

Reports stated that Amazon was also scouring social media to see who was uploading videos. By the afternoon, catering services were withdrawn from protesting workers. A warning was also circulated that if any worker left the premises, they would be dismissed. While Amazon has denied that any disciplinary actions have been taken, GMB has declared that it will support workers who are subjected to any such procedures.

Another round of talks were held with Amazon management on Thursday, with a manager saying that the workers’ message had been passed on to higher levels, and that it was still “under review”.

Meanwhile, the strike action received solidarity from prominent US labor organizer, and the president of the Amazon Labor Union (ALU), the first union at Amazon in the US, Christian Smalls– “shame on Amazon, we must not let up!”, he tweeted.