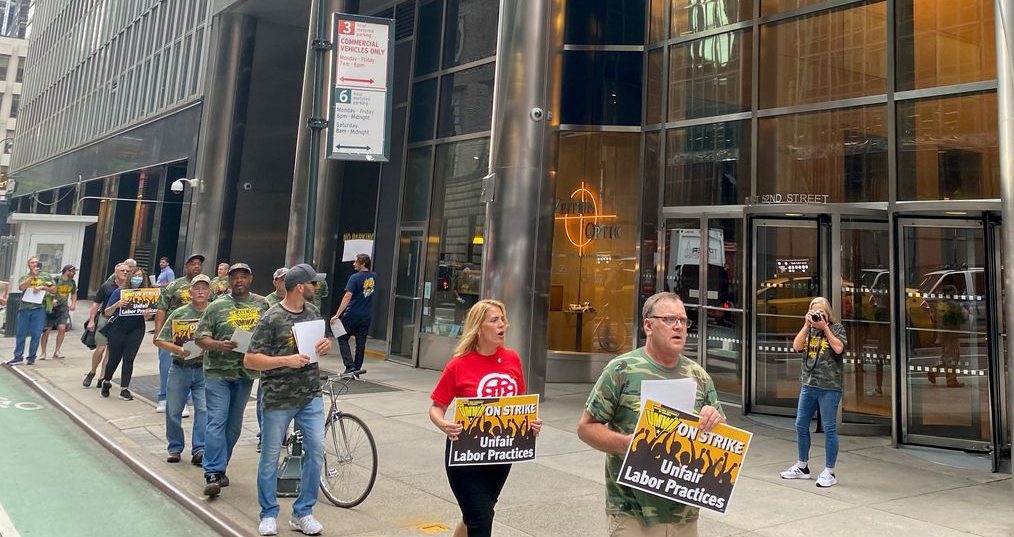 Above Photo: Members of the United Mine Workers of America protested in New York City Tuesday, June 22, 2021, showing solidarity with striking miners in Alabama.

About 14 striking Alabama mine workers have taken their case to Wall Street this morning.

Chanting “no contract, no coal,” the miners today launched the latest step in a strike that began April 1 for a new contract with Warrior Met Coal.

United Mine Workers of America President Cecil Roberts and union members plan to protest in front of the Manhattan offices of several hedge funds the union says are the reason the contract negotiations are stalled.

“These are the ones that can be responsible in seeing that we get a decent contract,” UMWA Legislative Director Phil Smith said by phone this morning.

The miners, along with other supporters, plan to protest in front of BlackRock Fund Advisors, State Street Global Advisors, and Renaissance Technologies.

They will also get support from other unions as well. Stuart Appelbaum, president of the Retail, Wholesale, Department Store Workers Union and Sara Nelson, Association of Flight Attendants president, are scheduled to join them. A spokeswoman for the RWDSU said that Appelbaum will take part as miners participated in demonstrations for the Amazon union drive in Bessemer earlier this year.

Thank you to our Brothers and Sisters who came out for the fight! @afa_cwa @RWDSU @IATSE @SEIU @UFCW @Teamsters pic.twitter.com/vDJmFAM4yn

The previous agreement with the union was negotiated as Warrior Met emerged from the bankruptcy proceedings of the former Walter Energy, which declared bankruptcy in 2016.

Nearly two weeks into the strike, it appeared a settlement had been reached, but that was rejected after the union members “emphatically” voted down the tentative agreement, saying it was not sufficient, according to the United Mine Workers of America. The union contends it made serious concessions in 2016 to keep the company operating, which the new contract did not redress sufficiently.

Smith said morale among union members remains strong, though some members have crossed the picket line.

“They’re holding strong,” he said. “We’ve had a lot of support, auxiliaries feeding families,” he said. “There’s a lot of dedicated people who are determined to see this thing through, no matter what it takes.”