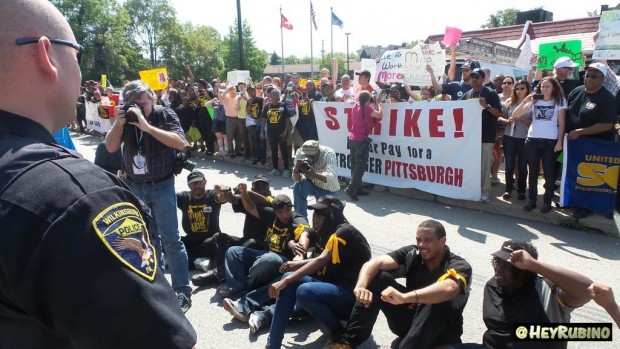 Thousands walk off their jobs in 150 cities, calling for higher pay, union rights

Workers from new industry, other countries join in

Nearly 500 fast-food workers—in uniforms from restaurants like McDonald’s, Burger King and Wendy’s—were arrested Thursday during a 150-city strike, as the fight for $15 and union rights intensified across the country. Thousands of cooks and cashiers walked off their jobs from more than 1,000 stores, chanting “We Believe That We Will Win,” and vowing to do whatever it takes to secure higher wages and union rights.

Workers in New York City, who launched the Fight for $15 nearly two years ago, were among the first to get arrested, after blocking traffic in front of a McDonald’s in Times Square early Thursday morning. Workers were also arrested Thursday morning in Detroit and Chicago. All over the country, from Las Vegas to Little Rock, workers walked off their jobs and took arrest to show that they can’t wait any longer for companies like McDonald’s to raise their pay.

“McDonald’s left us with no choice, but to turn up our call for $15 and union rights,” said Michael Lee, who works at McDonald’s in Greeensboro, N.C., and earns $8 an hour an hour. “We are struggling to survive and are going to do whatever it takes for our movement to win.”

As of early afternoon, 19 fast-food workers were arrested in New York City, 42 in Detroit, 23 in Chicago, 11 in Little Rock and 10 in Las Vegas. As the lunchtime rush began, workers were staging sit-ins outside McDonald’s restaurants in Miami, Rockford, Ill., Atlanta, Boston, Philadelphia, Flint, Hartford, Richmond, Va., and Charleston.

Workers went on strike in every region of the country at major fast-food restaurants including McDonald’s, Burger King, Wendy’s and KFC. The movement continued to spread, with workers walking off their jobs for the first time in Tucson, Ariz.; Minneapolis, Minn., Rochester, N.Y., and Little Rock, Ark. The Rev. William Barber II, president of the North Carolina NAACP; Rep. Keith Ellison, D-Minn; and local elected officials joined fast-food workers on the strike lines.

“I continue to be inspired by fast-food workers who are risking their own livelihoods for a better future and economy for all of us,” said the Rev. Barber. “Their fight for $15 and union rights is among the most important movements in our country. When fast-food workers win, we all win.”

The strike came just days after President Obama praised the Fight for $15 movement during a Labor Day speech in Milwaukee. “All across the country right now there’s a national movement going on made up of fast-food workers organizing to lift wages so they can provide for their families with pride and dignity,” President Obama said. “You know what, if I were looking for a job that lets me build some security for my family, I’d join a union. If I were busting my butt in the service industry and wanted an honest day’s pay for an honest day’s work, I’d join a union…I’d want a union looking out for me.”

Inspired by fast-food workers, other kinds of low-wage workers are beginning to join the movement to boost pay in fast-growing service sector jobs. In Atlanta, Boston, Chicago, Cleveland and Detroit non-union and union home care workers who provide in-home support and care for senior citizens and people with disabilities said they were joining the Fight for $15. To demonstrate their determination, they participated in strike lines and protests in front of McDonald’s restaurants in the five cities.

“Home care workers and fast-food workers have a lot in common,” said Liliana Coredero, of Lansing, Ill., who left a job at Walgreens for one in home care because she met elderly customers coming in to fill prescriptions and wanted to help them. “We work hard, in one of the nation’s fastest-growing industries, for low pay that makes it impossible for us to care for our own families. Now we have something else in common: we’re both part of the growing movement for $15 and we won’t stop until we win.”

Support in the US and Abroad

The movement is drawing support all over the country. Earlier this summer, the NAACP voted unanimously to back the fast-food workers’ campaign. And on Thursday, members of Congress, including Rep. Ellison; Rep. Raul Grijalva D-Ariz; and Rep. Gwen Moore, D-Wisc. joined striking workers.

“The fast-food campaign has changed what’s possible in the country,” said Rep. Keith Ellison, D-Minnesota, who stood with first-time strikers in MinneapolisThursday. “The workers are showing America the way forward to improving the economy for everyone.”

Support has also come from around the world. Fast-food workers from four continents traveled to the U.S. to stand with strikers in New York, Chicago, Los Angeles and Raleigh. When they return to their 13 countries (New Zealand, Japan, Korea, Philippines, Switzerland, Denmark, Italy, Belgium, France, UK, Colombia, Brazil and Argentina), they will report back on the strike and continue to build the alliance of global fast-food workers that was forged in May.

“McDonalds Workers in New Zealand were struggling to scrape by on low wages just as they are in the United States. But a few years ago we formed a union, fought for decent jobs, and now we make a living wage, close to $15 per hour,” said Tina Watson, a 44 year-old who has worked at McDonalds in Porirua, New Zealand for eight years and who joined strikers in Raleigh, NC Thursday. “We are still fighting for predictable scheduling. By standing together, we can achieve decent jobs for fast food workers from the United States to New Zealand and all over the world.”

Also Thursday, fast-food workers announced a 12-country, five-continent fall tour, during which they’ll meet with fast-food workers around the world to share lessons of their campaign. They will visit with unionized McDonald’s workers making living wages of more than $20 an hour in countries like Denmark and non-union workers who earn low wages in countries like the Philippines.

Labor Board Determines McDonald’s is the Boss

Thursday’s strike follows a series of major victories for fast-food workers. In July, the National Labor Relations Board’s general counsel determined that, despite McDonald’s repeated claims, the company is a joint employer that exerts substantial power over its employees’ working conditions. For nearly two years, McDonald’s and other fast-food workers have been joining together and going on strike, calling for $15 and the right to form a union without retaliation. But time and time again, the company and other industry players have tried to sidestep workers’ calls, inventing a make-believe world in which responsibility for wages and working conditions falls squarely on the shoulders of franchisees.

The NLRB move shows that McDonald’s can no longer hide behind its franchisees for the poor and often illegal treatment of workers. The government’s determination is the latest challenge to the fast-food industry’s low-wage business model, in which franchisors reap rewards of a profitable industry, while forcing franchisees to shoulder all the risk. In March, McDonald’s workers in three states filed class-action lawsuits against the company, alleging widespread wage theft. The New York Times wrote that the suits, “argue that both the corporate parent and the independently owned franchises where many of the plaintiffs work are jointly responsible for illegal pay practices carried out by the franchises…That strikes at the heart of the low-wage fast-food business model.”

And last month, the California state legislature passed a bill that expands the rights of franchisees statewide and brings greater balance to the franchisor-franchisee relationship. Huffington Post wrote that the fast-food industry “lost a really big fight,” while MSNBC called the bill a “major blow” to fast-food chains. By protecting franchisees from being put out of business arbitrarily and ensuring they can sell to qualified buyers, the legislature took a critical step toward correcting the imbalance of power between franchisors and the franchisees and workers who contribute to the success of fast-food restaurants in California.

A campaign that started in New York City in November 2012, with 200 fast-food workers walking off their jobs demanding $15 and the right to form a union without retaliation, has since spread to more than 150 cities in every region of the country, including the South. The growing Fight for $15 has been creditedwith elevating the debate around inequality in the U.S. MSNBC’s Chris Hayes said that it has “entirely changed the politics of the country.” Since the campaign launched, nearly 7 million low-wage workers have seen their wages rise. What seemed like a far-fetched goal–$15 an hour–is now a reality in Seattle, where Bloomberg News said the city adopted “the rallying cry of fast-food workers.”

As it spreads, the movement is challenging fast-food companies’ outdated notion that their workers are teenagers looking for pocket change. Today’s workersare mothers and fathers struggling to raise children on wages that are too low. And they’re showing the industry that if it doesn’t raise pay, it will continue to be at the center of the national debate on what’s wrong with our economy.

As corporations push down real wages for average American workers, a growing number of economists warn that low wages are a barrier to growth that are harming the overall U.S. economy.

Not only do fast-food jobs pay so little that a majority of industry workers are forced to rely on public assistance, but many workers don’t even see all of the money they earn. In addition to the class-action suits filed against McDonald’s alleging widespread and systematic wage theft, a poll by Hart research showed 89% of fast-food workers have had money stolen from their checks.

The fast-food worker campaign has fast-food companies back on their heels. In a filing with the Securities and Exchange Commission, McDonald’s said worker protests might force it to raise wages. A recent report shows the industry has by far the largest disparity between worker and CEO pay. New York City Comptroller Scott Stringer said, “Excessive pay disparities pose a risk to share owner value,” and that conversations around inequality should move into the boardrooms of profitable fast-food companies.

USA Today called the growing worker movement, “the issue that just won’t go away” for the fast-food industry. Indeed, Thursday’s arrests show that rather than going away, the movement is only growing stronger.

Fast-food workers went on strike in the following cities: