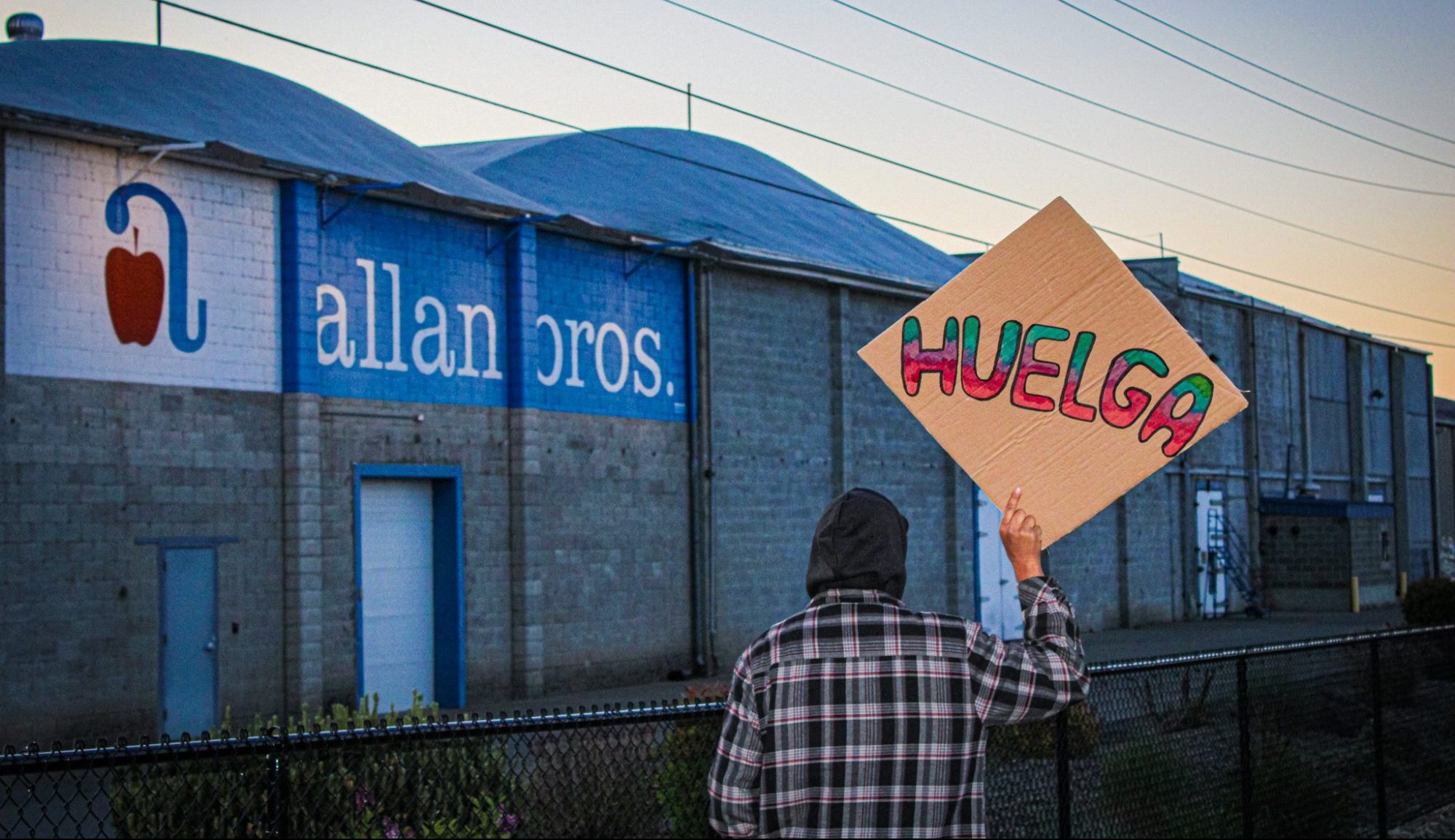 Striking In The Coronavirus Depression

Above photo: From Familias Unidas Por La Justicia on Facebook.

In response to COVID-19 and the COVID-19 Depression, workers have developed unique strategies and forms of organization to protect their lives and livelihoods. We saw in “Fighting the Great Depression — from Below” how in the early years of the Great Depression conventional trade union strikes became a rarity, but workers organized themselves in community-based, “horizontal” ways to fight for their survival. This commentary and the next describe the emergence of strikes for protection against COVID-19. This series will conclude with an evaluation of the prospects of “people power” in the Coronavirus Depression.

On March 25, sanitation workers in Pittsburgh refused to pick up garbage and held a rally outside their employer’s headquarters. It was one of the first reported walkouts for protection against the coronavirus pandemic that was officially declared by the World Health Organization (WHO) on March 11.

According to the Pittsburgh Post-Gazette,

During the 90-minute rally, workers parked trucks to block the entrances and exits to the parking lot of the building on Railroad Street. Employees demanded better protective gear, such as masks, to protect them from potential coronavirus exposure and hazard pay to help cover co-payments on medical visits in case they are injured on the job.

They also asked for an additional set of work boots — the workers said they are given just two pairs of boots per year — as well as better gloves. One worker said the gloves they currently use don’t protect their hands and allow water and liquids to drain down inside. Most workers have been purchasing their own surgical gloves since the coronavirus outbreak began, they said.

“Here we are at my job. Ain’t picking up no ‘rub,’” Mr. Moss said in the video. “The rubbish is sitting there. That’s all they care about is picking up the garbage. They don’t even care about our health.”[1]

The website Payday Report started keeping track and soon was listing dozens of wildcat strikes or, as some people started calling them, “stand downs.”[3]

In some places, workers are simply calling out sick en masse and refusing to show up so bosses shut down their plants. Many areas have no reporters with connections to the labor movement so many strikes are going completely uncovered. In other places, workers have protested for an hour or two before bosses have agreed to workers’ demands. Also, some union leaders are hesitant to get the media involved out of fear of retaliation.

Starting in late March a string of strikes and other actions spread through large commercial operations like Amazon, Instacart, Whole Foods, and Shipt. A strike at an Amazon warehouse to demand safety protections was met by retaliatory firing of a strike organizer – and by provision of personal protective equipment and enforcement of social distancing rules.[4]

Meanwhile, a variety of groups began calling for mass action on May 1. A coalition of left groups called for what they called a general strike, including walkouts, rent strikes, and a halt to shopping. Workers at large commercial operations began meeting over Zoom to plan a May Day walkout. An anonymous organizer of the Whole Foods sick-out organizer said, “A general strike is something we’ve talked about idly before but it has become a recurring conversation for us once corona broke out. We couldn’t have anticipated how neatly a general strike has started to coalesce this week. We didn’t know Instacart and Amazon workers were also going to strike.”[5] Instacart strike organizer Vanessa Bain told Vice, “Bosses and CEOs across sectors and industries have failed to act, so workers are taking matters into their own hands. The time for a general strike is now.”[6]

A flyer circulated on social media called for a “May Day General Strike” and asked customers to boycott Whole Foods, Amazon, Target, and Instacart on May 1.[7] Chris Smalls, who was fired for helping organize a previous Amazon strike, explained, “It’s more powerful when we come together.”

We formed an alliance between a bunch of different companies because we all have one common goal which is to save the lives of workers and communities. Right now isn’t the time to open up the economy. Amazon is a breeding ground [for this virus] which is spreading right now through multiple facilities.

On May 1, hundreds of workers called in sick at Amazon, Whole Foods, Target, Instacart, and Shipt as part of a coordinated one-day national strike to protest inadequate safety protections. The group Target Workers Unite reported that over 100 stores and distribution centers participated in the action. The demands of the sick-outs typically included increased hazard pay, paid sick leave for workers who choose to isolate or self-quarantine, and the closure of stores in response to confirmed coronavirus cases among workers. An Instacart shopper in San Francisco who helped organize the action said,

We’re trying to build a movement across companies and elevate each other’s demands. We’re all in the same position as frontline workers making similar demands that companies have failed to meet that are basic and essential to be able to do our jobs safely.”[8]

In mid-May, worker coronavirus protests were growing, taking new forms, and broadening demands. On May 7, fifty workers at Allan Bros fruit packing factory in Naches, Washington walked off the job demanding hazard pay, paid time off, health protection measures, and greater transparency about coronavirus threats.[9] Ten days later the strike had spread to six Yakima Valley fruit packing houses. Groups like the farmworkers union Familias Unidas por la Justicia were supporting the strikes, but said workers at individual plants were leading the strikes. According to Edgar Franks of Familias Unidas por la Justicia, “Worker committees from each of the fruit packing houses met” to “discuss strategies and also to encourage each other.”[10]

Signed agreements were reached at Allan Bros and three other companies. Workers at Columbia Reach Pack provided a signed agreement to a local newspaper.  The company agreed to provide personal protective equipment at no charge, comply with all government standards, and implement best practices to prevent the spread of COVID-19. The company also said it would not expect employees to work in a way that would endanger health and safety. Rosalinda Gonzalez, who has worked for Columbia Reach for 19 years and was a member of a worker-appointed committee that submitted requests to the company said, “I feel like we have the power to change things.”[11]

On May 19, The Guardian reported wildcat strikes, walkouts, and protests in food service, meat processing, retail, manufacturing, transportation and healthcare industries.[12] Truck drivers in California, Arizona, Michigan, Washington, DC, and Illinois coordinated on Facebook to organize convoys to protest the collapse of freight rates in a “race-to-the-bottom” competition spurred by the collapse of demand in the coronavirus depression. Fight for $15 and a union held one-day strikes and protests in California, Illinois, Florida, Missouri and Tennessee. In San Francisco, Uber drivers held a caravan to demand Uber stop funding a ballot initiative to repeal a law requiring that drivers be classified as employees not contractors.

Late in May, four workers at McDonald’s in Oakland, CA contracted COVID-19. (Ten days later eleven workers and seven family members tested positive.) In response, 33 of the restaurant’s 35 workers struck against unsafe working conditions – shutting down the restaurant and initiating the longest strike the McDonald’s chain has ever seen. The next day the McDonald’s parking lot was filled with a street rally. The strikers, many in quarantine, addressed the rally by amplified telephone. Striking McDonald’s worker Angeli Rodriguez said, “Until today the owner of this franchise has ignored our demands, we have been asking at least twice to meet with us. He didn’t close the store when he should have, that’s why 33 of us joined the strike.”[13] Socially-distanced community members held thirty-three cardboard silhouettes to represent each of the striking workers. Representatives of faith communities spoke.

Workers returned to work after winning some demands for improved sanitation, PPE, and safety practices. Five of the workers sued the franchise owner in court, whereupon an Alameda County Superior Court judge ordered that the employer follow many of the health and safety practices the striking workers had demanded.[14] Maria Ruiz, another 16-year McDonald’s worker who had led strikes for PPE and safety in nearby San Jose, was fired in retaliation.  A Bay Area McDonald’s Workers Strike Fund has been set up and is selling commemorative strike posters. [https://mcdstrikefund.bigcartel.com/product/mcdonald-s-escucha]

The Coronavirus strikes are spreading. They are winning some improvement in worker protections in some localities and workplaces. Do they have a potential for wider impact? The story of West Virginia miners’ struggle for protection against Black Lung disease suggests they might.

In January 1969, local miners unions – over the opposition of a corrupt United Mine Workers national union – joined with community organizations and a small group of activist doctors to form the West Virginia Black Lung Association. They drafted legislation and started holding meetings, rallies, and protest marches across West Virginia. On January 26, more than 3,000 miners joined the first statewide BLA meeting in Charleston. Miners began referring to the BLA as their “union away from the union.”

Journalist and activist Paul Nyden recounts what happened next:

On Tuesday, February 18, a local dispute erupted at Westmoreland Coal’s East Gulf Mine near the little town of Rhodell. As the day shift was about to go underground, one miner dumped water out of his lunch pail. All the miners walked off. Asked why, they said they wanted the legislature to pass the black lung bill. The next day, fourteen nearby mines shut down. By the end of the week, 12,000 men were on strike. The next Monday, dozens of miners arrived in Charleston and jammed galleries inside the State Capitol, carrying signs that said, “No Law. No Coal.” By Tuesday, 30,000 miners were out on strike.

According to Nyden, “No one could ever explain exactly how the strike began and grew.” The strike’s spread was helped by an “iron-clad principle of union coal miners never to cross picket lines or go in to work after a fellow miner dumped his water out.”

By early March more than 40,000 of West Virginia’s 43,000 coal miners were out on an unauthorized, illegal strike demanding passage of the BLA bill. On March 8, the final day of the regular legislative session, both houses approved a bill very much like BLA’s original proposal.

Miners met the next day in Beckley and pledged not to return to work until Republican Governor Arch Moore signed the bill. Under pressure, Moore signed it on March 12. The new law created tough dust control standards and a state fund to compensate miners suffering from pneumoconiosis.

After 23 days on strike the miners returned to work but threatened to hold a much bigger strike throughout the Appalachian coal states to persuade Congress to pass a federal Coal Mine Health and Safety law. Faced with what would be a nearly nationwide coal strike, Congress passed the new law on December 30.[15]

Time for workers to form a COVID-19 Association?