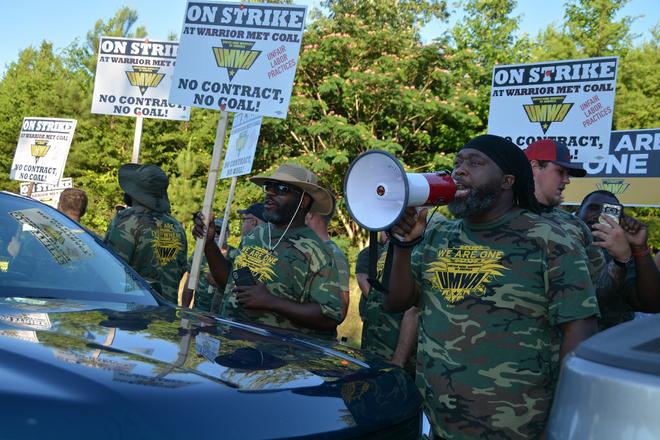 Canary In The Mine.

The five-month strike is about worker power in America. It’s also about fighting for a just transition for carbon-intensive industries.

Miners at Warrior Met Coal in Alabama have been on strike for almost five months, struggling to reverse concessions in pay, health care, and safety. Strikers brought their picket lines from the piney woods of the South to the tony Manhattan offices of three hedge fund shareholders on June 22, and more than 1,000 mine workers and union allies return today to demonstrate outside the offices of the company’s largest shareholder, asset manager BlackRock.

Miners have chanted, “No Contract, No Coal!” and “Warrior Met Has No Soul” on picket lines from the worksite in Brookwood, Alabama, to New York City. “We’re here to let the whole world know that we will take it from the bottom of the United States to the top. Where we have to take this fight, we’re going to take it,” Dedrick Gardner, a first-generation miner from a union household of teachers and postmasters, said on the New York picket line in June.

It’s a well-trodden path for United Mine Workers of America (UMWA) members. In 1974, coal miners from southeastern Kentucky’s Harlan County journeyed to Wall Street during the ninth month of their strike, leafleting outside a shareholder meeting of the company Duke Power.

Filmmaker Barbara Kopple’s Harlan County USA documented miners and their families as they rose up against gun-toting goons and the bosses who plundered their lungs and their labor to extract coal and soul. Kopple joined them on Wall Street too, capturing conversations between strikers and local cops discussing wages and benefits, a microcosm of shared class struggle from opposite sides of the fence. “They make some profit, but they keep it all to themselves, right?” the police officer asks the miner at one point. “Yeah, they don’t spread the wealth.”

That solidarity has been present at Warrior Met since miners walked off the job on April 1. When management put a contract offer on the table several days later, workers roundly rejected it by a vote of 1,006 to 45.

“The industry standard is 30 bucks an hour,” said Johnny Murphy, vice president of UMWA Local 2397. “We’re at $23. Corporate greed has taken over America.”

Warrior Met Coal is a unique example of that phenomenon. In 2016, the previous owner, Jim Walter Resources, went bankrupt, and auctioned off its two mines and one preparation plant. The new owners brought together investment firms BlackRock Fund Advisors, State Street Global Advisors, and Renaissance Technologies as the company’s majority shareholders.

The miners agreed to cuts in wages and benefits, reasoning that digging the company out of a financial hole was a small price to pay to stave off another mine closure. But the cuts were drastic. Hourly wages were slashed by $6, paid holidays whittled down to three days a year, and overtime pay eviscerated, with schedules extending to seven days a week. Health insurance costs shot up, as workers were responsible for 20 percent of their premium, with higher co-pays and deductibles. This is particularly crucial in mining work, where conditions lead to diseases like silicosis and black lung, which is caused by breathing in coal dust and has a high incidence among miners.

“We’ve been in prison for five years,” said UMWA Local 2245 President Brian Michael Kelly, a miner for 25 years. “We used to have off all holidays. We used to get paid time and a half on Saturdays, double time on Sundays.”

Invoking shared sacrifice, Warrior Met promised lots of improvements once the company attained financial solvency. Five years later, workers have realized that they were duped. Aside from the cuts to health care and wages—reversing advances earlier struggles forced the coal bosses to concede—their grueling work hours hark back to the 19th century, the era before miners first won the eight-hour workday in 1896. Even the company’s offer to avoid the strike promised only a $1.50-an-hour pay increase, and would have locked in punitive firing policies and unsafe working conditions the union had agreed to in 2016.

“They were trying to rule with an iron fist, making us work seven days a week,” Brian Seabolt, a miner for 16 years, said on the New York picket line. “We’re going to hold our ground.”

Now the miners have to steel themselves to violence on the picket lines, where they have been arrested and mowed down by vehicles driven by company employees.

“I was not even in the center of the road and he hit me on the right side of my body and kept on going,” said Amy Pinkerton, the wife of Local 2245 member Greg Pinkerton, who was also hit in an earlier incident.

“I’ve been hit twice, and we’re not going to let that scare us away,” said Seabolt.

“My son’s truck was bashed in on one side, and busted the taillight out,” said Kelly, adding that a union representative was also targeted. “Flat out, ran him over.”

These incidents, combined with scabbing, have also weakened the bonds of solidarity in the tight-knit mining community in Alabama.

“It’s a hard pill to swallow at times,” said Kelly. “I’ve had buddies who left the union and took foremen positions with the company. I don’t even look at them. If they was our buddies, if they’d come out on the picket line in support, this company would wake up really fast.”

It’s also personal in other ways. “My son had to quit college to help support us on strike,” said Kelly. “I tried to talk him out of it.”

Beginning in 1946, when continuous mining machinery was introduced in the coalfields, miners have undergone a cycle of boom and bust. Wages have risen and fallen, the workforce expanding and contracting in direct proportion to worker leverage.

In March 1950, UMWA president John L. Lewis negotiated the first national agreement with the coal operators organized into the Bituminous Coal Operators’ Association. The miners got higher wages and other benefits in exchange for mechanization, labor peace, and increased productivity. From then until 1967, weekly wages for miners more than doubled, from $67 to $153, according to Paul J. Nyden in Rebel Rank and File: Labor Militancy and Revolt From Below During the Long 1970s.

In the 1970s, mergers and acquisitions consolidated the industry under the control of larger companies. The worker reaction was laid out by journalist Curtis Seltzer in The Nation: “Coal miners have perfected a simple way of making history: They strike.” For decades since, amid shrinking demand for coal and agitation to reduce reliance on fossil fuels, workers struck against abuses by supervisors and coal operators and to defend hard-won health care benefits and pension rights.

The Warrior Met strike comes as demands from climate justice groups and even the UMWA itself for a transition to renewable energy to ward off climate catastrophe have grown more urgent, while carbon-intensive manufacturing has been taken over by hedge funds amid plant closures and bankruptcies.

“We have to be realistic,” said UMWA President Cecil E. Roberts. “Whether people agree that it needs to happen or not, an energy transition is going on in the United States. We need to be upfront about that.”

The type of metallurgical-grade coal mined at Warrior Met still gets used in steel production, which rebounded in the United States slightly when the Trump tariffs were issued in 2018. Lee Adler, who teaches at Cornell University’s School of Industrial and Labor Relations and has represented miners as an attorney for over 40 years, believes that if the economy rebounds, miners at Warrior Met will have a modicum of leverage over the hedge funds.

“If the economy really starts galloping and the need for the kind of steel that this coal is used to make, then the scabs aren’t going to be sufficient for productivity levels that might be required,” said Adler.

Yet the coal industry will not be saved through steelmaking alone. “The first victims of climate change are workers themselves,” said labor scholar Kate Bronfenbrenner, also from Cornell’s ILR School. She adds that job growth has been restricted to food service and janitorial jobs, which is at odds with the “dignity quotient” of how miners have come to be socialized as skilled workers, and the intrinsic self-worth they find in the work they do.

A just transition would find new purposes for skilled workers. Underwood, North Dakota, is a town with no traffic lights and an economy built on agriculture and coal. With 700 coal jobs on the line, local leaders found a buyer for a coal-fired power plant, who agreed to retrofit it for carbon-capture technology and to develop a wind farm. The plan has been hailed as a model for saving other plants.

“I can speak for the whole community when I say prayers were answered,” said Mayor Leon Weisenburger Jr., himself a coal miner. The plan fit within the UMWA’s belief that an energy transition should “construct facilities on former coal mine property.”

Zach Cunningham, from the Cornell ILR School’s Worker Institute, proposes focusing on making the transition to renewable-energy sources one that provides good-paying jobs, rather than a narrative of “good jobs versus the environment.” He cites the project labor agreements advocated by the Climate Jobs New York coalition, which would contain sustainability and climate-protection provisions and create good union jobs, and the strong labor standards for green-energy work included in a bill that became law in Connecticut this year.

“They’re going to be good jobs if workers and unions fight for them to be good jobs, which is what we’re seeing in Alabama right now, and that’s really what the history of coal mining has been,” Cunningham said. “These are to this day dirty, dangerous jobs, but because of efforts over decades and decades, they’ve been jobs that are family-sustaining, community-sustaining, and that has to guide our efforts as we’re rebuilding our green economy.”

At the first New York City picket line, coal miner Brian Kelly told the Prospect how his family contained generations of miners and electrical workers. “We always sat down on Sundays and ate dinners together and talked the history of why we need unions in this country,” Kelly said. “I hope by 2030, 2035, that this young generation realizes the importance of having a fairer wage, of having time off, of having health and safety in their workforce, of being able to stand up to their foremen, to their bosses and people who just bully over ’em.”