Student Debt Is At All-Time-High Of Over $1 Trillion

More than a decade has passed since young Americans faced debt levels this high.

Debt among 19 to 29-year-old Americans exceeded $1 trillion at the end of 2018, according to the New York Federal Reserve Consumer Credit Panel. That’s the highest debt exposure for the youngest adult group since late 2007.

Debt levels play a role in how young adults view their spending conditions, according to a University of Michigan survey Friday. Younger adults — those under age 35 — have reduced their spending compared with previous generations possibly because of weakened job prospects, delayed marriage and educational debt.

Policy makers have recognized that lower spending limits economic growth. As a result, a number of policies to boost younger adults spending such as forgiving student debt have entered the political arena, according to Richard Curtin, director of the University of Michigan consumer survey.

Student loans make up the majority of the $1,005,000,000,000 owed by this cohort, followed by mortgage debt. New mortgages among young adults today remain quite a bit below levels incurred in the early 2000s. This may suggest adults are waiting longer to buy homes and may opt to rent for a longer period of time than previous generations.

At the end of last year, auto loans were the third largest portion of debt composition in the U.S. followed by credit card debt. Overall consumer debt reached a record $13.5 trillion.

Americans tend to experience their peak debt during mid-life years and debt should decline as individuals age. A more striking piece of data is that the implied debt that is 90-plus days delinquent for student loans dwarfs other loan type categories.

Once a person is the subject of third party collections from their student loan delinquencies, their credit profile will be hindered for years. Missing a student loan repayment can also harm an individuals chances of getting a mortgage. The implied debt in arrears from student loans represents about 40 percent of the total debt balance 90-plus days delinquent. 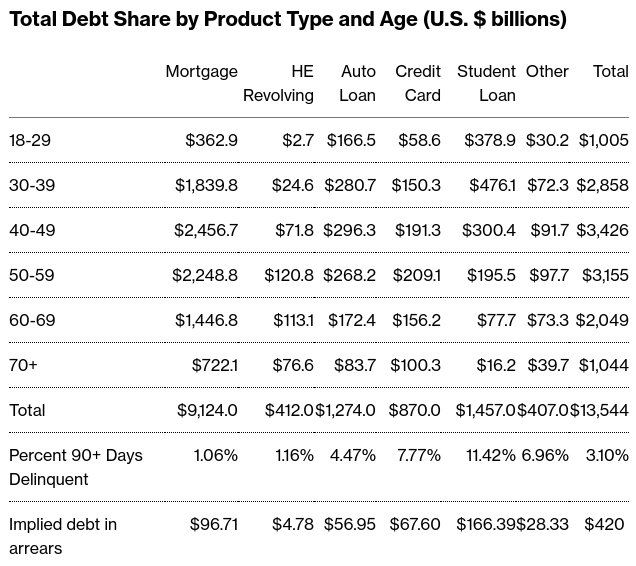