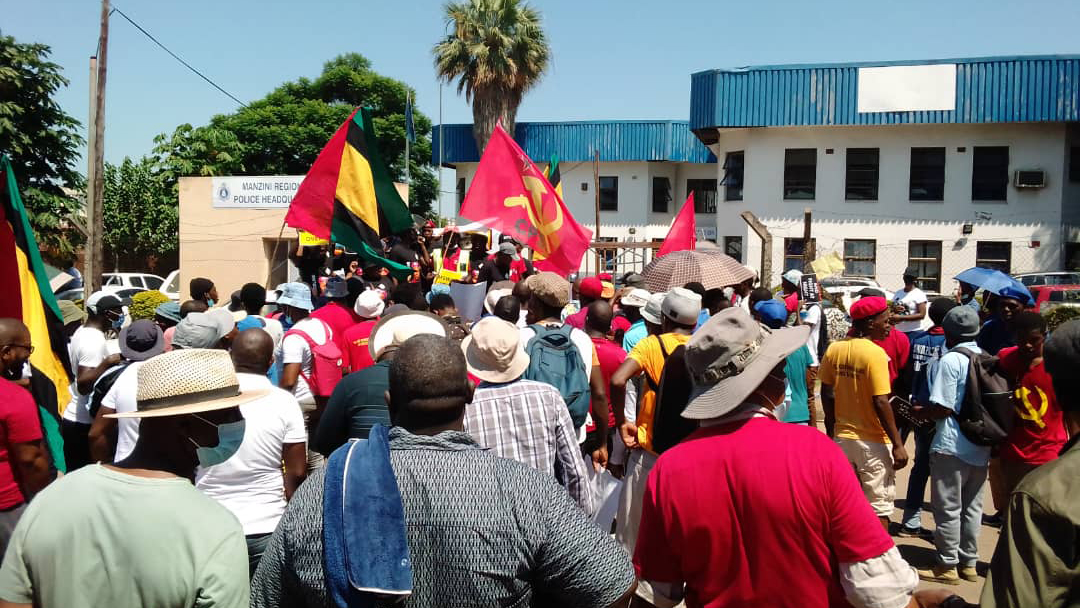 Above Photo: Colani Maseko’s bail came a day after the SNUS marched to the Manzini regional police headquarters and held a demonstration on February 3. @CPSwaziland on Twitter.

The arrest of Colani Maseko and subsequent torture of student leaders coincided with a fresh wave of anti-monarchist protests.

A court in the city of Manzini granted bail to Colani Maseko, the president of Swaziland National Union of Students (SNUS) on Friday, February 4. The student leader had been arrested on January 31 and charged with sedition.

His bail came a day after the SNUS marched to the Manzini regional police headquarters and held a demonstration on February 3. A cross section of Swaziland’s pro-democracy forces, including the banned political parties, trade unions, and youth organizations, attended the action.

Outside the police headquarters, protesters at the demonstration openly threatened to render the kingdom “ungovernable” until the release of Maseko and all other political prisoners of Africa’s last absolute monarchy. Students reiterated the call for the overthrow of King Mswati III to make way for multi-party elections.

This long-standing demand has led to several cycles of political upheavals in the small, landlocked southern African country, especially over the last year when, for the first time, anti-monarchist protests swept across the rural areas.

After the state violently cracked down on these peaceful protests, an uprising erupted in the industrial areas. As the king’s properties came under attack mid-last year, he fled the country in late-June 2021. He returned by mid-July only after the army had violently repressed the uprising by killing 70 people and injuring hundreds.

The suppression, however, did not succeed in demobilizing the pro-democracy movement. The arrest of Colani and the subsequent custodial torture of several student leaders comes in the context of a fresh wave of anti-monarchist protests that have been on the surge in several universities since late October. Students in campuses across Swaziland took down and burnt portraits of the king in protest.

Students who have been demanding scholarships and the refunding of fees paid for hostel facilities which were unused during the lockdown, are not convinced by the government’s excuse of poverty, as the king continues to divert millions from the economy for his own luxuries.

King Mswati III – who indulges in royal palaces, a fleet of Rolls Royce cars, private jets, and decadent celebrations – owns and controls most of the country’s economy and runs it for the profit of himself and his cronies. Meanwhile, 70% of the country’s population languishes in poverty.

Vowing to be the “the last generation to live under the monarchy”, students in campuses across the country have begun vandalizing the king’s portraits, declaring that they no longer recognize his authority, as Simphiwe Dlamini, former SNUS Secretary General and national organizer of the Communist Party of Swaziland (CPS), told Peoples Dispatch.

While on his way to his campus on Monday, January 31, Colani was “abducted” by plain-clothed security officials, in connection with such a protest action in Manzini on November 29, 2021 at the Southern Africa Nazarene University (SANU).

SNUS Campaign officer, Sibusiso Nkwanyana, who was caught recording this abduction on phone, was also whisked away by these officials of the Criminal Investigations Department (CID) who drove him to Mliba police station. Here he was “tortured and throttled”, before being released without any charges, SNUS said in a statement.

In another part of the city, the police also arrested Simphiwe Gamedze, a leader of the SNUS branch at Luyengo campus of the University of Swaziland, known officially as the University of Eswatini (UNESWA) since the king renamed the country. After being interrogated and tortured, Gamedze was also released without charges.

Times of Eswatini reported the following day, on February 1, that Colani has been accused of having “committed an act of with seditious intention by removing and vandalizing Their Majesties’ portrait pictures and encouraging people to disobey the lawfully placed head of State portrait in a public institution.”

He was further charged with two counts of malicious property damage to the portraits “valued at E8,000” and to “a gate and two padlocks.. valued at E3,000.” Police also claimed that damage to said properties was caused by Colani “with intent…to injure…Thandokuhle Mdziniso,” who was identified to be in their “lawful possession”.

Following this report, SANU’s management met with the Manzini Police to discuss the charges and inform them “that some information in the charge sheet was incorrect,” stated a memorandum to students and staff of SANU by its registrar on Tuesday, February 1.

The “person/persons from the group of students responsible for this damage was/were not identified,” the report states. “The University wishes to point out further that no intent to injure Mr. Thandokuhle Mdzinisi was committed by the student Colani Maseko as presented in the charges”.

It is unclear at this point based on whose complaint or testimony the police are pursuing these charges against Colani, despite the refutation officially provided by the university management.

“Who’s next? We live in fear of the Eswatini Government. Anyone can be arrested with trumped-up charges laid on him. Leaders of unions and progressives aren’t safe under the dictatorship,” the Swaziland National Association of Teachers (SNAT) said. “Until when are we going to live like this?”

The morning of February 1, Awuviva Sakhile Nxumali, SNUS political educator and the Manzini regional chairperson of Swaziland Youth Congress (SWAYOCO), met Colani at the city’s remand center where those awaiting trial are held.

“I was delivering his food. We have asked him to not eat anything given by the prison authorities because they can poison him,” he told Peoples Dispatch. According to Awuviva, Colani was “very calm and composed. The only thing he said was that the struggle must continue, and we should not back down.”

Heading to the campus sports ground where the students were demonstrating in solidarity with Colani, Awuviva addressed the demonstration, delivering to them the president’s message and informing them about his condition in prison.

Right after his address, the police attacked the demonstration, dispersing the students. Awuviva managed to get away from the spot, but the plain-clothed police followed him and kidnapped him from a privately owned van before driving to the basement police post under the Riverstone Mall.

“Here, for around ten minutes, I was beaten by the CIDs. Then they left, and eight men from the semi-military police wing called the Operational Service Unit came in. They pushed me down to the ground, poured water all over me and shocked me repeatedly with multiple taser guns that are used for riot-control,” he said. After he fell unconscious, he was woken up, asked to wash up and given another round of beatings and electric shocks.

When his condition became critical after an hour of torture, he was dropped off at the Raleigh Fitkin Memorial hospital. Awuviva is left with internal injuries to ligaments around his neck and rib cage.

“These young people are at the forefront of the call for the fall of King Mswati’s government…The arrest and persecution of people calling for democracy in the country will not deter the peoples’ call for change. We call upon all our ground forces to the battlefront and render…(the kingdom) ungovernable,” People’s United Democratic Movement (PUDEMO), which is one of the largest banned political parties in the country, said in a statement.

Condemning the practice of “abducting people, assaulting them and then releasing them without taking them through.. courts” as “criminal conduct”, SWAYOCO declared, “It is high time we realize that the police has done too much damage to the nation for us to sit and watch them kill us like flies, torture and do as it pleases them.”

“Let us fight,” SWAYOCO added, “for the immediate release of Cde Colani Khulekani Maseko…and all other political prisoners.” The other political prisoners include Amos Mbhedzi, a South African Communist Party (SACP) member imprisoned in Swaziland for over a decade, and two members of the monarchy-controlled parliament, Bacede Mabuza and Mthandeni Dube.

The MPs were imprisoned for siding with the people’s demand for multiparty election last year, when all the 59 constituencies in Swaziland unprecedentedly witnessed rallies to the offices of MPs in June 2021.

This country-wide movement, which was followed by an uprising in industrial areas, came on the heels of the protests against police brutality, which had been led by SNUS after the killing of a student from UNESWA in May 2021. Amidst this protest, SNUS’s then secretary general, Bafanabakhe Sacolo, had also been arrested, and subsequently released on bail.

Addressing the demonstration by SNUS outside Manzini regional police HQ on February 3 demanding Colani’s release, Bafanabakhe, now a Central Committee member of the CPS, reiterated the party’s full support for the student movement, which has been on the forefront of Swaziland’s struggle for democracy

“We must start from tonight to demonstrate that we want democracy,” said PUDEMO’s President, Mlungisi Makhanya, in his address to the demonstration. Pleading “Awuviva Nxumalo to show us the images of the people who tortured him,” he went on to say “there is no democracy without heroes,” recognizing the courage exhibited by the students under torture.

Protesters carried placards with the slogan: “mobilize during the day and fight at night,” a phrase reminiscent of attacks on the king’s properties, amidst which he had fled the country last year. The demonstration was also attended by several other banned political parties.

Several unions of teachers and students from Zimbabwe, Lesotho, Malawi, Madagascar and from the Congress Of South African Trade Unions (COSATU) expressed their solidarity ahead of this demonstration, before Colani was granted bail.